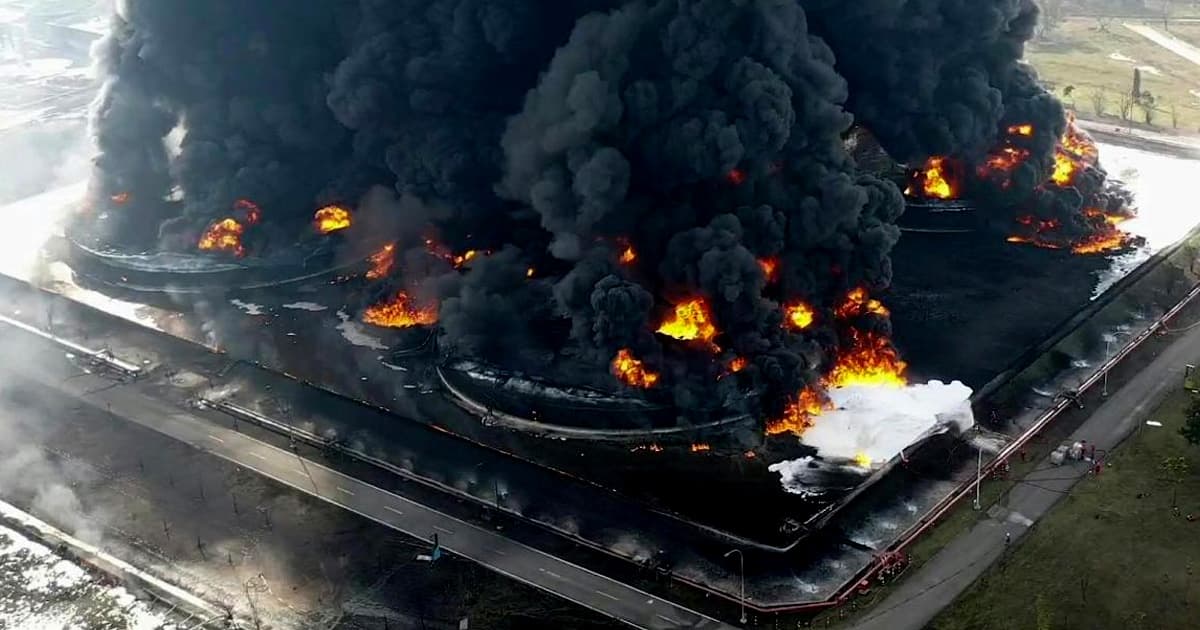 Watch an Oil Refinery Explode After Possibly Getting Hit by Lightning

The explosion itself could be heard from over 100 miles away.

The explosion itself could be heard from over 100 miles away.

An Indonesian oil refinery on the island of Java caught on fire early Monday, ballooning into a massive column of fire and smoke.

The incident seriously injured six people and forced 1,000 nearby residents from their homes, The New York Times reports.

Drone footage uploaded to Reddit shows the true extent of the blaze. The smoke blows so thick that it totally obscures the morning sky behind it.

The blast was so massive, in fact, that it shattered nearby homes. The explosion itself could be heard from over 100 miles away.

Authorities believe the conflagration may have been started by a lightning strike.

"The cause of the fire is not known with certainty, but at the time of the incident, it was raining heavily accompanied by lightning," state-owned oil refinery company Pertamina said in a statement, as reported by the Times.

Pertamina was also involved in a massive offshore crude oil spill in 2019.

Knew It All Along
Exxon Scientists Knew About Global Warming for Decades While Company Denied It
Jan 13
Read More
Crude
Researchers Still Finding Residue From Massive 2010 BP Oil Spill
8. 10. 22
Read More
Hitting Rock Bottom
Oil Companies Are Pumping Worthless Oil Back Underground
5. 21. 20
Read More
+Social+Newsletter
TopicsAbout UsContact Us
Copyright ©, Camden Media Inc All Rights Reserved. See our User Agreement, Privacy Policy and Data Use Policy. The material on this site may not be reproduced, distributed, transmitted, cached or otherwise used, except with prior written permission of Futurism. Articles may contain affiliate links which enable us to share in the revenue of any purchases made.
Fonts by Typekit and Monotype.