It keeps coming back to haunt us. 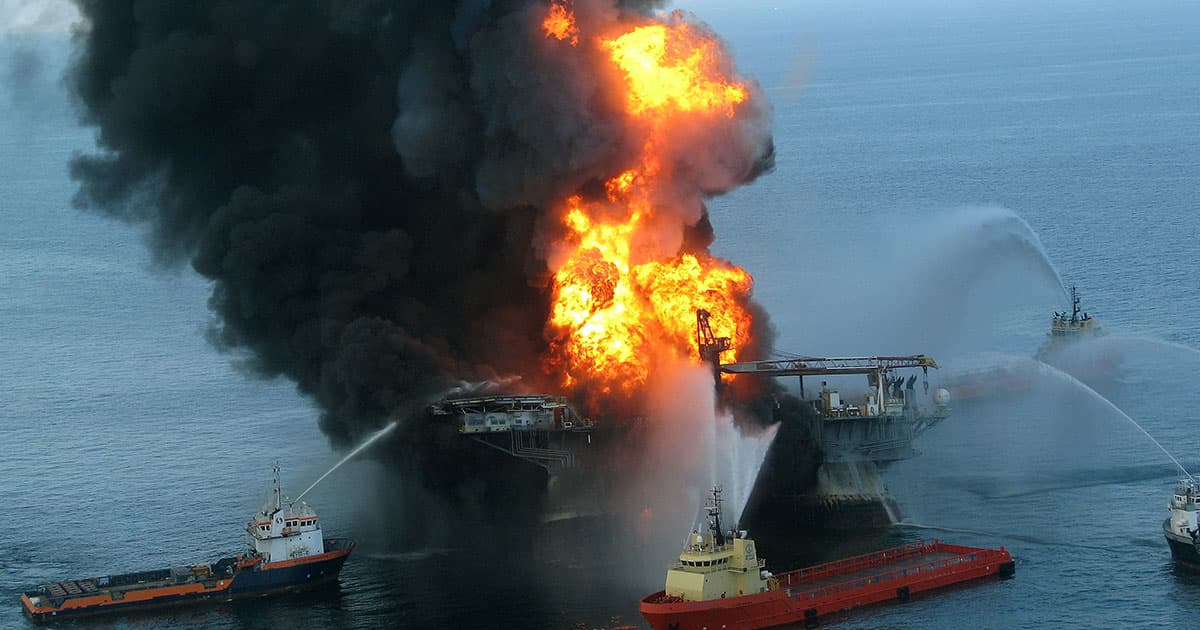 After the gigantic BP oil spill in the Gulf of Mexico back in 2010, researchers have found that in spite of cleanup efforts, residue remained some ten years later.

As detailed in a new study, published in the journal Frontiers in Marine Science, researchers found oil residue a decade after the Deepwater Horizon oil spill — also known as the BP oil spill — ravaged the Gulf of Mexico for months in 2010.

As the study notes, there were relatively small amounts of oil residue found between 2015 and 2020 from the spill. But the mere fact that there was any oil residue found at all — and the way it was transformed by sunlight and ocean microbes — could have huge implications on our mitigation efforts of future oil spills.

"Water-soluble chemicals dissolved relatively quickly into the sea and were biodegraded by marine organisms, but this was not true for all of the spilled oil’s components," a blog post penned by paper author and Louisiana State University professor Edward Overton, reads. "Oily layers coated the shorelines grasses and some particles even sank to the seafloor, with low quantities still present in 2020."

While "most damage from oil spills occurs fairly soon after the spill" due to the way the oil's components biodegrade, Overton writes, the complex degradation process that occurred in some of the residues may prolong a spill's effects.

"After oxidative weathering by sunlight, light crude oil can readily form water-in-oil emulsions, and these emulsions continue weathering but at a reduced rate, thus prolonging their residence time and potential for negative effects in the environment," the paper reads. "The oil’s aromatics compounds can be toxic in themselves or after oxidation."

These toxic properties may cause different problems for local wildlife than the initial impacts from oil spills that we often see on television, such as the widely-shared images of birds being coated with slick black oil during the Deepwater Horizon disaster and others like it.

Not all crude oil is created equally, the researchers note, and the name itself is a catch-all for "a very complex mixture of many thousands of distinct chemical species." Oil from one region is going to have a somewhat different chemical makeup than oil from another, which makes predicting what happens when disaster strikes difficult.

Besides, we still have a lot to learn about how crude oil degrades in a natural environment.

"Environmental circumstances surrounding specific spills greatly affect how quickly the compounds can react, what they cover or coat and how much oxygen can be taken up in critical habitats," Overton argues. "Therefore, broad generalization about oil spills requires understanding what was spilled and what are the environmental conditions of the spill."

The researchers hope that their study will open the door to further studies on the long-term effects of oil spills like Deepwater Horizon — and, hopefully, will contribute to finding new ways to mitigate their often devastating effects.

Read This Next
Hitting Rock Bottom
Oil Companies Are Pumping Worthless Oil Back Underground
Futurism
BP Just Invested $5 Million in a Company That Builds EV Charging Systems
Futurism
US to Reverse Offshore Drilling Regulations, Leaving the Environment Vulnerable
Futurism
One of the World's Largest Oil Companies is Spending $1 Billion a Year on Green Energy Research
Futurism
An Engineer Has Accidentally Discovered a Way to Make Transporting Oil Safer
More on Earth & Energy
Worm Solutions
Yesterday on the byte
Scientists Intrigued by Worms That Break Down Plastic Really Fast
Arrested Development
Yesterday on the byte
Climate Activist Conducts Interview While Being Carried Away by Police
Big Ship Big Sails
Tuesday on the byte
Supertanker Becomes Vastly More Efficient by Adding Small Sails
READ MORE STORIES ABOUT / Earth & Energy
Keep up.
Subscribe to our daily newsletter to keep in touch with the subjects shaping our future.
+Social+Newsletter
TopicsAbout UsContact Us
Copyright ©, Camden Media Inc All Rights Reserved. See our User Agreement, Privacy Policy and Data Use Policy. The material on this site may not be reproduced, distributed, transmitted, cached or otherwise used, except with prior written permission of Futurism. Articles may contain affiliate links which enable us to share in the revenue of any purchases made.
Fonts by Typekit and Monotype.