"I was as truthful as I'm knowledgeable to be." 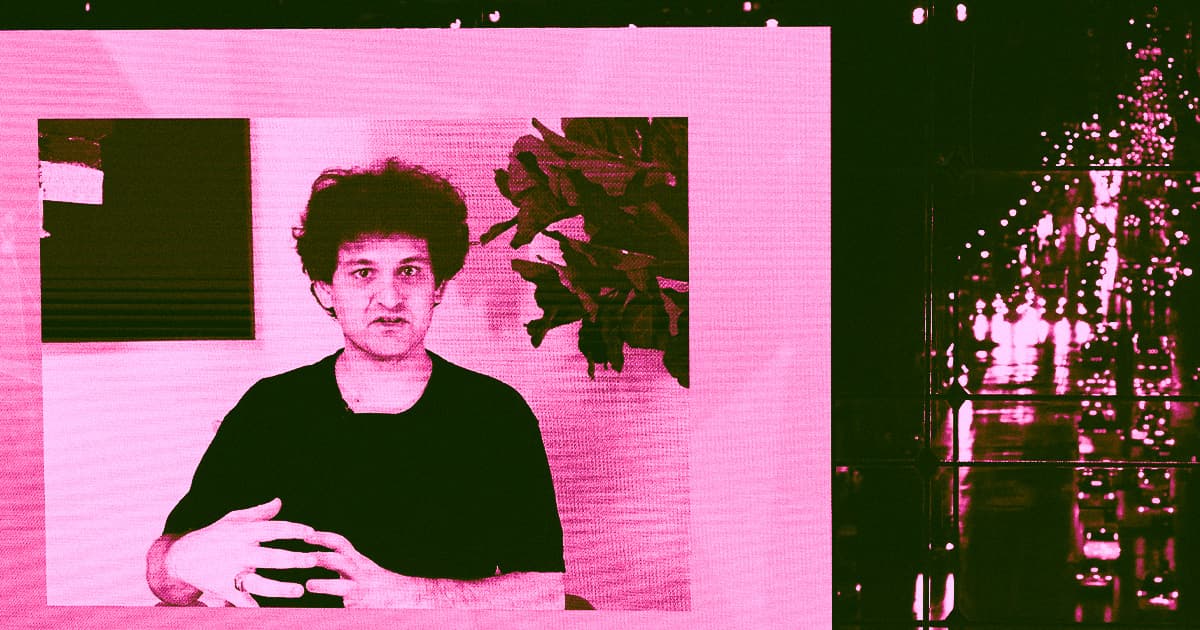 Since the crash, in fact, he's been so active on Twitter that the first law firm that dared take his case on quit, noting his "incessant and disruptive tweeting" as their reason to jump ship.

And if his tweets were a lot on their own, SBF has been on a media tear this week, virtually taking the stage last night at The New York Times' DealBook Summit to answer — or, actually, mostly dodge — some tough questions about FTX's collapse into ruin.

Bankman-Fried been accused by many of breaking FTX's own user guidelines, effectively using customer funds as a personal piggy bank to pay off creditors of FTX and Alameda Research, a closely-tied hedge fund that he also helped found. If you ask him, though, which the NYT interviewer Andrew Ross Sorkin definitely did, he didn't try to defraud his investors. Oh, and he says he's also been truthful all the way. Maybe. Sort of.

"I did not try to commit fraud on anyone," Bankman-Fried loosely assured summit-goers, adding later that "I was as truthful as I'm knowledgeable to be... there are some things I wish I knew more about."

Of course, we simply must note that "I was as truthful as I'm knowledgeable to be" is probably the wildest way that we've ever heard anyone — let alone someone who's left a multibillion dollar hole in millions of investors' bank accounts — answer a yes or no question about lying. It's like if a young George Washington looked at his father and, instead of saying "I chopped down the cherry tree," said "the cherry tree was chopped, perhaps by my hand, but I wish I knew more about it."

It's... an answer. But it doesn't really mean anything.

Indeed, this blatant around-the-bush response tactic seems to be Bankman-Fried's post-crash MO. Sure, he's offered interviewers some iterations of his initial "I f****d up" tweet. But when Sorkin asked, for example, if the rumors that SBF and other FTXers were just a drug-happy bunch of weirdo kids were true, the fallen crypto titan once again pivoted.

"There were no wild parties. At our parties, we play board games," he told Sorkin, seemingly oblivious to the fact that you can definitely do drugs and also play board games. "Twenty percent of people would have a quarter of a beer each, and the rest of us would not drink anything."

He made no specific mention of Adderall, which has been linked to the culture at FTX before its collapse, although did say that he's been prescribed "various things at various times to help with focus and concentration."

The DealBook Summit wasn't the only arena where SBF spoke out — and practiced his avoidance techniques — this week. Soon after that appearance, ABC News' Good Morning America released a deeply cringe-inducing interview between Bankman-Fried and GMA anchor George Stephanopoulos. Stephanopoulos asked, point blank, if SBF knew that FTX had violated its policies by lending user funds to Alameda. It's a yes or no question, but SBF again repeatedly failed to sufficiently answer, going on long tangents about margin calls, risk assessment, and users' own bad borrowing.

Unsurprisingly, his final answer — which he came to after a fair bit of wrangling by Stephanopoulos — lacked any real substance.

"Uh... I don't know of FTX deposits being used to pay off Alameda creditors," he finally responded, before turning the question back on his interviewer. "Which creditors are you referring to?"

Watching these interviews, it's pretty easy to understand why SBF's lawyers defected. And honestly, given that he clearly doesn't have sound answers for the difficult questions he absolutely needs to face, it's worth wondering why he insists on speaking out at all.

But to that point, Bankman-Fried has worked tirelessly to craft a careful, controlled narrative for himself as a gold-hearted genius boy who, as he supposedly fought for regulation and progressive politics, would one day descend from his crypto castle in the sky to somehow save the world.

That image has all but shattered. And in the aftermath, it seems that a narrative-obsessed SBF can't help but to grasp for even just a semblance of control — even if it works against him in the end.

READ MORE: 'Look, I Screwed Up': Sam Bankman-Fried Is Challenged on the Collapse of FTX [The New York Times]

Read This Next
SBF'ed Up
Sam Bankman-Fried Was a Horrible Boss, Former Exec Says
Beanbag Chair Musings
Sam Bankman-Fried, Bored on House Arrest, Starts a Substack
Old School
FTX's New CEO Says Company Did "Old Fashioned Embezzlement"
Locked Up
Sam Bankman-Fried Arrested in Bahamas, Facing US Criminal Charges
Sometimes You Winkleviin, Sometimes You Winklevose
Former Employees Say Problems Were Obvious at the Winklevoss' Exchange Before It Paused Withdrawals
More on Blocknik
Girlbosses
Wednesday on the byte
"Cryptoqueen" Accused of Stealing Billions Suddenly Surfaces
Their Minds...
Jan 28 on the byte
Business Geniuses at Amazon Hard at Work on Hot New Idea: NFTs
Floored Apes
Jan 27 on the byte
Yuga Labs Says Its Bored Apes Are Absolutely Copyrighted, Thank You Very Much
READ MORE STORIES ABOUT / Blocknik
Keep up.
Subscribe to our daily newsletter to keep in touch with the subjects shaping our future.
+Social+Newsletter
TopicsAbout UsContact Us
Copyright ©, Camden Media Inc All Rights Reserved. See our User Agreement, Privacy Policy and Data Use Policy. The material on this site may not be reproduced, distributed, transmitted, cached or otherwise used, except with prior written permission of Futurism. Articles may contain affiliate links which enable us to share in the revenue of any purchases made.
Fonts by Typekit and Monotype.