Tom Brady Appears to Be Totally Screwed by the FTX Collapse

How many Subway commercials will it take for him to financially recover? 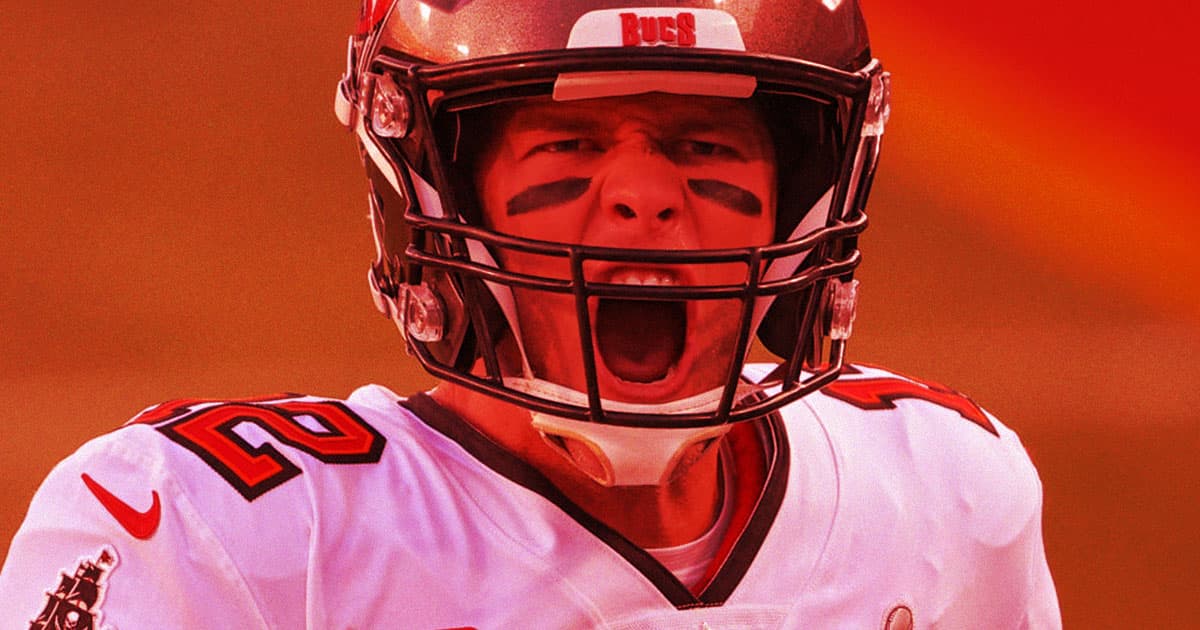 Tom Brady is learning very quickly that you can't win 'em all, and we're only sort of talking about his currently-losing record on the 2022-23 NFL season.

The formerly former quarterback was an equity investor in — and public ambassador of — the now spectacularly imploded crypto exchange FTX, which shocked the world this week with its tumultuous fall from web3 grace. Given that FTX is currently hurtling towards bankruptcy with an $8 billion bleed, we can't imagine how much money Brady actually lost.

Brady and soon-to-be-ex wife Gisele Bündchen announced their joint partnership with the fallen crypto giant back in June 2021, picking up where Larry David's "invest in stuff you don't understand at all ha ha relatable" Super Bowl ad left off with their own cursed commercial. The terms of the divorcing couple's agreement with FTX was never disclosed, but the now-defunct exchange would have been valued at $18 billion just a few weeks after their partnership was announced, following a $900 million funding round, so some serious money was in play.

"It's an incredibly exciting time in the crypto-world, and Sam and the revolutionary FTX team continue to open my eyes to the endless possibilities," Brady said in a press release at the time. "This particular opportunity showed us the importance of educating people about the power of crypto while simultaneously giving back to our communities and planet."

If Brady and Bündchen were to pick any crypto exchange to dig their nightshade-free claws into, FTX certainly made sense. FTX CEO Sam Bankman-Fried — who just set the record for the most wealth lost in a single day — strategically positioned himself as not just any ol' crypto bro, but Mr. Crypto Adult, pushing for regulation and realism in a chaotic, hype-driven industry.

His vision for crypto, per FTX advertisements, was not just a force for trolling and getting rich quick, but a force for good. Similarly, the former Brady Bunch have long positioned themselves as philanthropists; in that same press release, Bündchen noted that "Sam and I are both enthusiasts who share a belief that we are on this earth for a greater reason," that reason, apparently, being to save the world, one digital asset at a time. Aw.

Bündchen even starred in a series of print ads in the New Yorker alongside the now-disgraced CEO. They ran in June of this year, just as the crypto crash was starting to take hold. But if they seemed in poor taste then, they're even more cringe-inducing now.

"I'm in on FTX," read the ad, "because we share a passion for creating positive change."

Brady and Bündchen are far from the only stars with expensive ties to the imploded exchange. The Golden State Warriors' Stephen Curry apparently got some crypto advice from Tommy boy, gaining an equity stake last September; MLB wunderkind Shohei Ohtani became an equity investor and ambassador that November; tennis star Naomi Osaka achieved the same status just this past March. Indeed, FTX even took the whole "we definitely love sports" thing one step further by inking a long-term deal with the Miami Heat to rename their entire arena.

It's worth noting that while losing a ton of money generally sucks for anyone, all of these figures, Brady and Bündchen especially, will likely come out just fine. Will the divorcing power couple have to sell their island or something? Maybe. But the former's current one-year NFL contract is worth $15 million, while the latter was the world's highest-paid model for 14 years in a row. Prior to the FTX news, they held a combined net worth of roughly $650 million.

But crypto is an asset, and celebrities, for whatever reason, thought it was totally cool and fine to sell unstable investments to consumers like shoes or makeup or sandwiches they don't eat. And any real people who bought in will, as always, be the ones who hurt the most.

I’m around if anyone needs me for their 4th of July barbecue. Fire it up @FTX_Official 🇺🇸🔥 pic.twitter.com/Gd27fcN5fx

Read This Next
FTuxxed
Behind the Lawsuit Against Celebs Who Shilled FTX Before Its Spectacular Meltdown
Toes in the Water
Guy Linked to Huge Crypto Meltdown Says It’s Just a Coincidence That He’s Hanging Out in a Country With No Extradition to United States
Guest List
Celebrities Are Officially Being Sued by FTX Retail Investors
This is Fine
Crypto Guy Says He's Doing Fine After Losing Billions of Customers' Money, Getting Plenty of Sleep
Tumblr or Bust
This Strongly Appears To Be Alameda CEO Caroline Ellison's Tumblr Account
More on Blocknik
Another One
Nov 23 on the byte
Coinbase May Be in Real Serious Trouble Now
Laundry Day
Nov 23 on the byte
Someone's Converting Millions of the Stolen FTX Funds Into Bitcoin
Tweeter's Brain
Nov 21 on the byte
Sam Bankman-Fried's Lawyers Quit Because of His "Incessant and Disruptive Tweeting"
READ MORE STORIES ABOUT / Blocknik
Keep up.
Subscribe to our daily newsletter to keep in touch with the subjects shaping our future.
+Social+Newsletter
TopicsAbout UsContact Us
Copyright ©, Camden Media Inc All Rights Reserved. See our User Agreement, Privacy Policy and Data Use Policy. The material on this site may not be reproduced, distributed, transmitted, cached or otherwise used, except with prior written permission of Futurism. Articles may contain affiliate links which enable us to share in the revenue of any purchases made.
Fonts by Typekit and Monotype.