Don't talk to Maye Musk or her son ever again!! 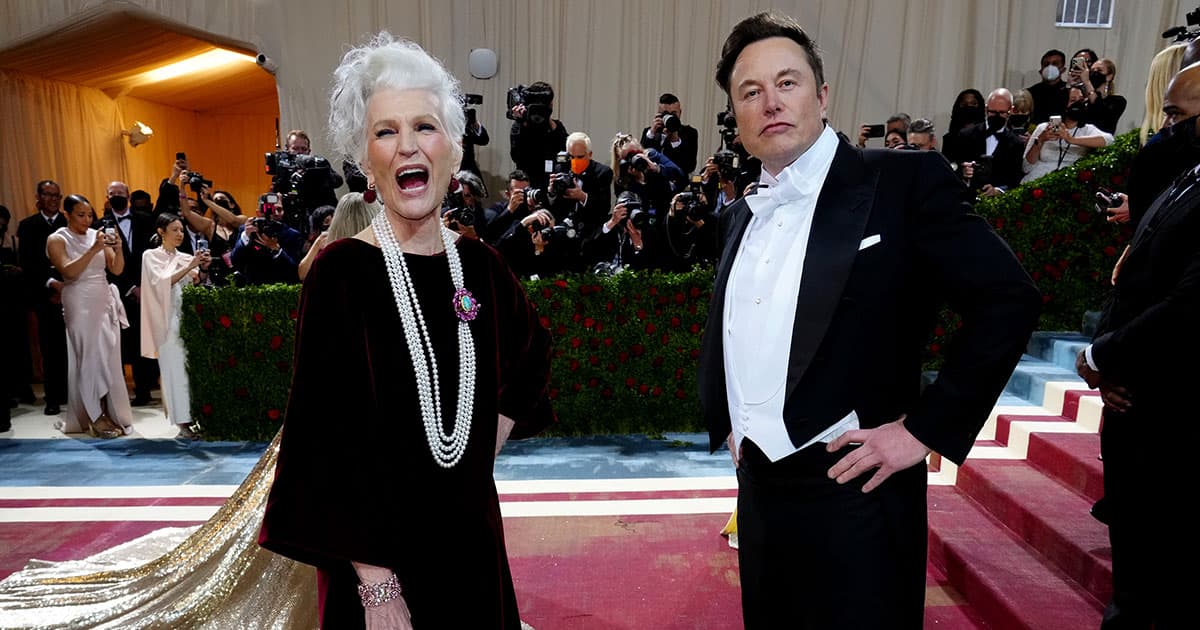 Hey. Guys. Quit it. He may have just laid off thousands of employees in the most chaotic and callous ways imaginable, but you know what? You just hate him 'cause you ain't him, and it's time to lay off — according to one Maye Musk, mother of Elon, that is.

At least, that's the message she brought to "The Elon Musk Show," an aptly-titled BBC series about — you guessed it! — the mercurial, arguably maniacal SpaceX, Tesla, and Twitter CEO's rise to infamy. The covergirl model reportedly makes an appearance in the doc's second episode, where she took the opportunity to address her superlatively wealthy kiddo's online detractors.

"With those companies, he gets a lot of hate," Maye said, according to Insider. "Stop being mean to him."

Per Insider, Maye additionally referred to her son as a "genius," which makes sense because she's his mom and a lot of moms think that about their kids. She also reportedly added that even though people are jealous of her baby boy's many achievements, "no one wants to be him." In other words, he's no tyrant, just a misunderstood genius — and his life is tough.

It's worth noting that this isn't Maye's first foray into Elon defense. In fact, she's been in mama bear mode ever since her son's tumultuous acquisition of Twitter. She's tagged some "nasty" tweets directed at her son with hashtags like "#NastyNasty" (savage!) and has also joined in Elon's crying face emoji chorus, laughing at the non-emerald-miners out there attempting to use her son's newly-purchased public forum as... a public forum. Idiots!

Of course, again because she's his mom, she's failed to address the fact that her son's cultural relevance is very much borne of his own desire to be extremely chaotic on the internet. He's not just the richest man in the world; he's also a steady shitposter and terminally online Twitter troll, which are inextricably linked to his and his companies' incredibly visible — and controversial — profiles.

And being able to say and do whatever you want on the internet — or in the real world — doesn't mean that those words and actions should be free from comments or criticism, especially when the person saying them is the world's richest and most influential man. Is straight up bullying ever okay? Not really! But criticism is a necessary part of the territory here.

To be fair, the doc does feature some heavy praise from non-familial figures as well, so it's not just Maye who's here to defend. In episode one, former SpaceX talent chief Dolly Singh reportedly argues that once Elon's finished "building his legacy, it will be unquestionable that he is a combination of Einstein, Tesla, and Rockefeller." Unquestionable!

So to recap, for us morons out here: Elon Musk has learned everything that was ever in Nicola Tesla or Albert Einstein's brains, which effectively makes him a supersupergenius, and even though he makes her sleep in the garage sometimes, his mom wants you to stop being mean to him because he's a supersupergenius with a very hard job. Okay?

READ MORE: Even Elon Musk's mom admits no one wants to be him: 'He gets a lot of hate. Stop being mean to him.' [Insider]

Read This Next
Head Like A Hole
Elon Musk's Crying About Trent Reznor Shows That He Is a Big, Big Baby
Secrets Secrets
Elon Musk Vigorously Denies That SBF Secretly Owns Part of Twitter
Good Time to Leave
Panicked Elon Musk Reportedly Begging Engineers Not to Leave
You're Fired
Elon Musk Is Mass-Firing Employees Who Dared Criticize Him in Slack
Musk 24/7
Sad Elon Musk Says He's Overwhelmed In Strange Interview After the Power Went Out
More on Future Society
Miserly Musk
Nov 22 on the byte
Cheapskate Elon Musk Refusing to Pay Bills at Twitter
Tesla Tank
Nov 22 on the byte
Elon Musk's Wealth Has Plummeted by Over $100 Billion This Year
Extremely Hardcore
Nov 18 on the byte
Elon Musk Locks Twitter Employees Out Office, Then Asks Them to Meet Him on the 10th Floor
READ MORE STORIES ABOUT / Future Society
Keep up.
Subscribe to our daily newsletter to keep in touch with the subjects shaping our future.
+Social+Newsletter
TopicsAbout UsContact Us
Copyright ©, Camden Media Inc All Rights Reserved. See our User Agreement, Privacy Policy and Data Use Policy. The material on this site may not be reproduced, distributed, transmitted, cached or otherwise used, except with prior written permission of Futurism. Articles may contain affiliate links which enable us to share in the revenue of any purchases made.
Fonts by Typekit and Monotype.