Experts Say That Elon Musk Has No Idea How Math Works

He must be joking. 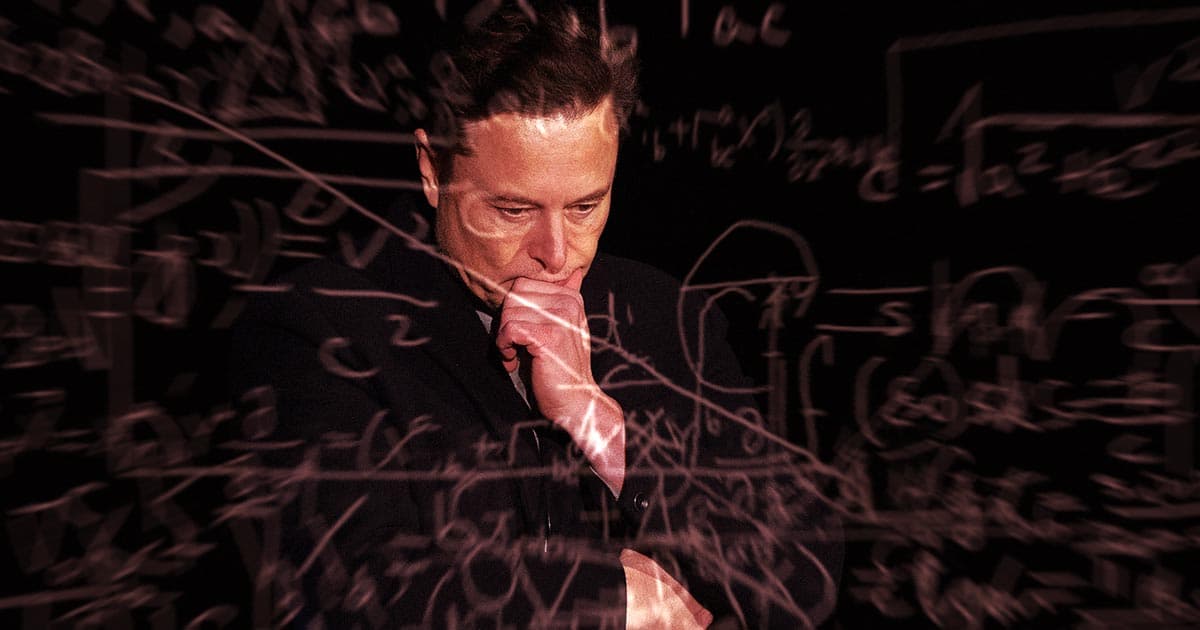 Elon Musk, the CEO of Tesla and SpaceX, and possibly the future owner of Twitter, has a plan to figure out just how many fake accounts there actually are on the social media platform: by asking users to literally count them individually, a plan that experts say is a fool's errand, CNBC reports.

In fact, his plan sounded so unbelievable on the face of it that said experts are now convinced Musk is trying to troll us.

Musk made headlines yet again late last Friday when he revealed that the Twitter deal is "on hold" for the time being, "pending details supporting calculation that spam/fake accounts do indeed represent less than five percent of users."

He did, however, add later that he is "still committed to acquisition."

The move was interpreted by many as Musk getting cold feet and attempting to back out of the $44 billion buyout.

Musk has aired his grief about spambots many times in the past, promising to put an end to them once and for all when he takes over the company. The billionaire has also promised to "authenticate all real humans" on the platform.

"To find out, my team will do a random sample of 100 followers of Twitter," Musk suggested in a Friday post. "I invite others to repeat the same process and see what they discover...

"Pick any account with a lot of followers," he added. "Ignore first 1000 followers, then pick every 10th. I’m open to better ideas."

As it turns out, his great scheme is, well, methodologically simpleminded.

Many, including Facebook co-founder Dustin Moskovitz, were to quick to point out that the billionaire's approach isn't random and far too small of a sample.

"How will they decide one is fake?" Moskovitz argued. "Also I feel like 'doesn’t trust the Twitter team to help pull the sample' is it’s own kind of red flag."

Others also pointed out that Musk's latest comments prove that he has done astonishingly little homework to understand the thing he's willing to buy for tens of billions of dollars.

Which leaves the question: is Musk, the world's biggest troll, messing with us yet again?

"Perhaps bots are less likely to follow this account to avoid detection," University of Washington professor Carl Bergstrom, who co-wrote a book on the public misunderstanding of data, told CNBC. "Perhaps they’re more likely to follow to seem legitimate."

"But I just can’t fathom that Musk is doing anything other than trolling us with this silly sampling scheme," he added, a sentiment shared by Moskovitz.

The theory that Musk is just messing with us gained steam on Monday after Twitter CEO Parag Agrawal attempted to set the record straight in a lengthy thread.

In short, the question is far more complicated than Musk is making it out to be, with Agrawal pointing out that "spam isn’t just ‘binary’ (human/not human)." In addition, he said, Twitter already suspends "over half a million spam accounts every day, usually before any of you even see them on Twitter."

"Our actual internal estimates for the last four quarters were all well under five percent," Agrawal wrote, pointing out that it's "not even possible to know which accounts are counted as [monetizable daily active users] on any given day."

Musk, for his part, decided to offer up next to nothing in terms of meaningful or constructive feedback, a move he has become known for over the years.

Then he followed up with — we are dead serious here — a poop emoji.

All told, Musk appears to have very little actual interest in solving Twitter's spam problem, a serious and pertinent issue.

The billionaire CEO has yet again shown that he has no faith in the people running Twitter. In fact, the company's execs shared the exact estimation process, according to Agrawal, with Musk personally — which is clearly something he ignored outright.

At the end of the day, Musk's comments demonstrate that we know very little about his actual intentions. It's a messy negotiation that could get even messier — which comes at a great cost to Twitter.

READ MORE: Elon Musk wants to know how many fake accounts Twitter has, but experts say his approach is all wrong [CNBC]

Read This Next
Work Culture
Former Tesla Manager Says Workers Will Actually Love Elon Musk's Tyrannical Email
The Saga Continues
SpaceX President Defends Elon Musk Against Sexual Misconduct Claims
Thanks Man!
After Sexual Allegations, Elon Musk Jets Off to Brazil
Wait Wait
Elon Musk Has a Ridiculous Excuse for Why He Suddenly Doesn't Want to Buy Twitter
Market Madness
Bill Gates Says He's Quite Concerned About the Global Economy
More on Future Society
Degrees Celsius
8:44 PM on the byte
Crypto Startup in Crisis Insists That Its CEO Isn't Trying to Flee the Country
Sweet Silence
2:50 PM on the byte
Elon Musk Is Missing
Go Time
Yesterday on the byte
Hackers Declare War on Anti-Abortion States
READ MORE STORIES ABOUT / Future Society
Keep up.
Subscribe to our daily newsletter to keep in touch with the subjects shaping our future.
+Social+Newsletter
TopicsAbout UsContact Us
Copyright ©, Camden Media Inc All Rights Reserved. See our User Agreement, Privacy Policy and Data Use Policy. The material on this site may not be reproduced, distributed, transmitted, cached or otherwise used, except with prior written permission of Futurism. Fonts by Typekit and Monotype.