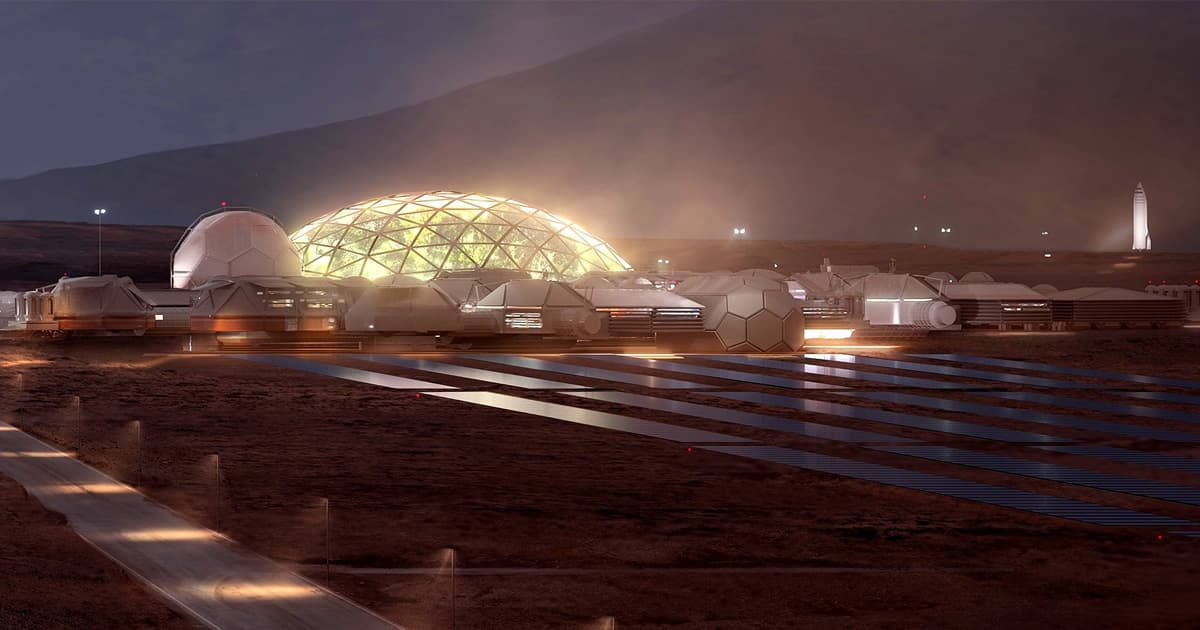 "Life in glass domes at first," Musk wrote in a Thursday tweet, responding to a question about what life on Mars will look like early on. "Eventually, terraformed to support life, like Earth."

"Terraforming will be too slow to be relevant in our lifetime," Musk wrote in a follow-up tweet. "However, we can establish a human base there in our lifetime. At least a future spacefaring civilization — discovering our ruins — will be impressed humans got that far."

Terraforming Mars is indeed a massive undertaking. An analysis last year concluded that it may require 3,500 nuclear warheads every single day to increase Mars' atmospheric pressure to breathable levels and melt the planet's ice caps in order to release carbon dioxide, which will then be trapped in the form of greenhouses gases.

But there's one big snag with that plan. The ensuing radiation would also turn the surface completely inhabitable.

And a 2018 study also concluded that there simply isn't enough trapped carbon dioxide on the Red Planet to sufficiently raise enough atmospheric pressure to sustain humans on the surface.

But those limitations aren't going to stop Musk from going after his dream of establishing a permanent presence there.

Musk has previously claimed that with the help of "a thousand" Starship spacecraft, massive rockets he says will be capable of carrying to 100 tons of cargo or 100 passengers between planets, "a sustainable Mars city" could be established. About 100 vehicles would each have to carry 100 tons of cargo every two years, according to Musk's calculations.

"I want to emphasize, this is a very hard and dangerous and difficult thing," he added at the time. "Not for the faint of heart. Good chance you’ll die. And it’s going to be tough, tough going, but it’ll be pretty glorious if it works out."

The ambition lies very close to the entrepreneur's heart — or at least his marketing strategy.

"If we don’t improve our pace of progress, I’m definitely going to be dead before we go to Mars," Musk said during the Satellite 2020 conference in Washington back in March.

If everything goes according to Musk's ambitious plan, the first Starship will make its way to Mars as soon as 2024.

Read This Next
Big Impact
Meteorite Hit Mars So Hard NASA Thought It Was a Quake
Makeover Scene
Space Tourist Says He's Thinking About Flying SpaceX Craft Up to Fix Hubble
Grain of Salt
There's a Huge Problem With Elon Musk's Promise to Bring Starlink to Iran
Palliative Care
NASA's Mars Lander Refuses to Die Even Though It's Supposed To
Sluggo Mode
SpaceX Has a Major Problem With Its Starlink Internet Connections
More on Off World
Watery Grave
Nov 22 on the byte
Chinese Military Forcefully Seizes Debris That Philippines Recovered After It Fell From Space
Jetsam
Nov 22 on the byte
Lunar Lander Released by NASA’s Artemis 1 Mission Dies
Not Not Accurate
Nov 21 on the byte
Bad Guy in New "Indiana Jones" Movie Is Nazi Who Works at NASA
READ MORE STORIES ABOUT / Off World
Keep up.
Subscribe to our daily newsletter to keep in touch with the subjects shaping our future.
+Social+Newsletter
TopicsAbout UsContact Us
Copyright ©, Camden Media Inc All Rights Reserved. See our User Agreement, Privacy Policy and Data Use Policy. The material on this site may not be reproduced, distributed, transmitted, cached or otherwise used, except with prior written permission of Futurism. Articles may contain affiliate links which enable us to share in the revenue of any purchases made.
Fonts by Typekit and Monotype.