Billionaires aren't going to save us. 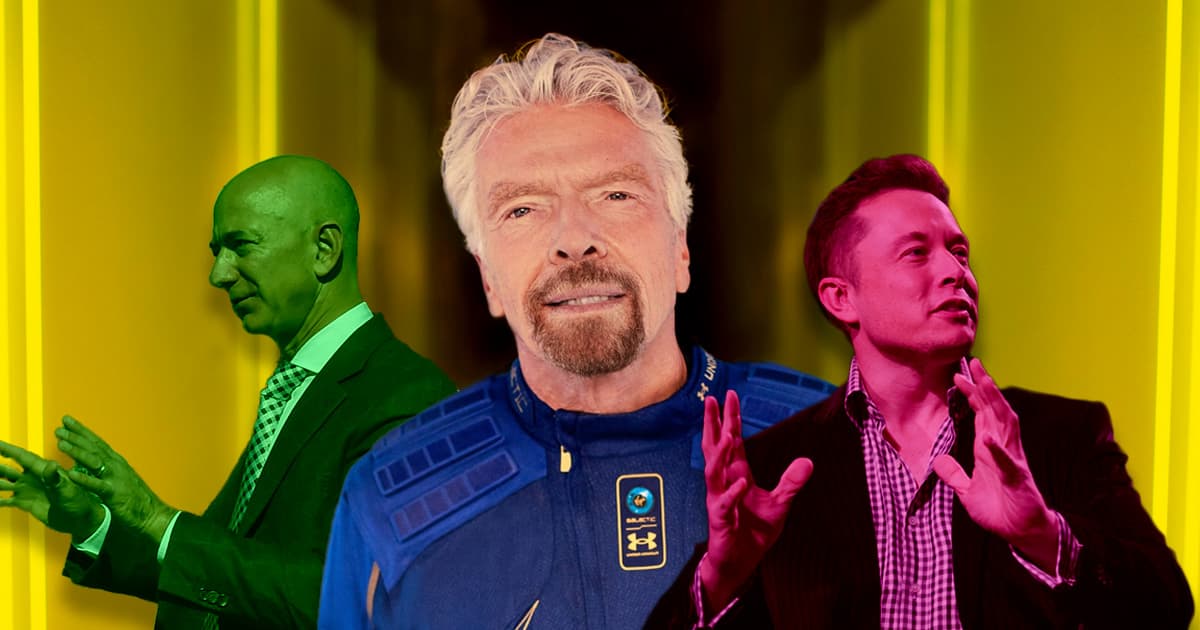 Billionaires are racing to get off this godforsaken planet.

A club made up of a number of the richest men in the world are vying to establish their companies as the de facto way to get to space for an exciting, adrenaline-fueled adventure. The promise seems to be tantalizing moments of weightless respite — reserved to the select few who can afford a ticket — from heatwaves, hurricanes, devastating floods, and a global pandemic down below.

The race came to a head when Virgin Galactic CEO Richard Branson took off on a space plane and traveled to about 50 miles above the Earth's surface over the weekend. Blue Origin's Jeff Bezos is also set to accompany his brother on a ride of a lifetime on board the company's New Shepard spacecraft on July 20.

While Branson and his crew of six spent four luxurious minutes falling weightlessly back down to Earth, firefighters battled with raging wildfires on the West Coast, doctors intubated COVID-19 patients, and residents nailed shutters on their windows in preparation for yet another exceptionally turbulent hurricane season.

The rivalry between billionaires has ignited a heated debate about inequality. To many, those billions of dollars could've been spent alleviating the stresses of a worsening climate and humanitarian crises — while to others, it's an exhilarating taste of a future where space is more within reach than it's ever been before.

SpaceX CEO Elon Musk seems to be particularly incensed by the view that billionaires are wasting their time trying to explore space while failing to fix our planet's many problems.

"Those who attack space maybe they don't realize that space represents hope for so many people," Musk tweeted on Monday.

But is this really a zero sum game? Do investments in space exploration really come at the expense of trying to ameliorate the conditions for humanity back on Earth?

The answer to that question has become a lot more complex since the dawn of the private space industry. Billionaires are pouring copious amounts of money into their space ventures, and not only because they claim it's the right thing to do. It's also, at the end of the day, because they have greatly benefited from a system that has allowed them to accumulate obscene amounts of wealth in the first place.

In other words, they and their companies have operated within a system that has done little in the way of recirculating wealth and reinvesting it in a better future for humanity.

In fact, as a recent Internal Revenue Service data leak illustrates, billionaires — Musk and Bezos chief among them — have managed to wriggle their way out of paying billions in federal income taxes.

In the US in particular, lawmakers have increasingly put pressure on NASA to do more with less, all the while spending a staggering amount on funding the country's sprawling military-industrial complex. NASA's budget in fiscal year 2020 was less than $23 billion, for instance, while the US spent more than $778 billion on its military in the same year.

No wonder, then, that NASA is forced to turn to the private industry for help, particularly if it still plans on sending astronauts to the Moon by 2024.

In short, space company billionaires have bought themselves a seat at the head of the table — and outsize influence on where space exploration will go next.

And in the face of it all, Biden's incoming administration significantly re-aimed NASA's sights on a worsening environment, subtly backburnering trips to the Moon and Mars in favor of environmental work.

Credit where credit is due, the billionaire club has also made contributions toward the good of the planet, though results have been mixed.

Bezos's contributions, most recently a pledge of $10 billion announced on Earth Day last year to fight climate change, amounted to a middling seven percent of his net worth. All the while, his e-retail business generated record amounts of carbon emissions, rising 15 percent year over 2020 alone.

Musk's efforts to battle climate change are a little more nuanced than that. Tesla has arguably contributed greatly to the rise of the electric car, an industry-wide shift that could pay dividends in reducing the carbon footprint of the automobile.

But SpaceX's rockets alone make massive contributions to carbon emissions. A single SpaceX Falcon Heavy rocket burns about 400 metric tons of kerosene and emits more emissions in just a few minutes than an average car would in more than 200 years, according to the LA Times.

Branson's Virgin group also has also launched its own green Earth initiative. The "Virgin Earth Challenge" offered up a $25 million prize for the demonstration of technologies capable of permanently sucking up greenhouses gases. But, infuriatingly, the prize was never awarded and the challenge was quietly cancelled back in 2019.

So are billionaires going to save us? They might help here and there, but so far, their best efforts have been hit or miss.

At the same time, it's become increasingly clear that humanity is facing an uphill battle to ensure the survival of future generations on this planet. 2021 has already been a year of grim records, with the highest ever temperatures already being recorded in some places. Following the devastating pandemic, brutal climate change-linked heatwaves are causing hundreds more preventable deaths.

Will traveling to space give Musk, Bezos, Branson, and company some much needed perspective? It's not out of the question.

"You see the Earth from space and it changes you," Bezos promised in the announcement video of his trip to space next week. "It changes your relationship with this planet, with humanity. It’s one Earth."

Of course we know better than to take them by their word this late in the game. Climate actions will always speak louder than words.

Watching members of the top one percent in society rocket off to space (or close to it) isn't exactly encouraging to those who argue those billions of dollars could have been better spent on ensuring our survival as a species.

And does space really "represent hope for so many people," as Musk argues? That depends on whether you're willing to take him up on the offer to eventually live in his city on Mars.

It's admittedly hard to imagine a world where trips to space are commonplace when people are literally spontaneously dying from climate change-induced heat and humidity.

Or as failed presidential candidate and new age guru Marianne Williamson put it in her reply to Musk on Twitter: "The problem is that Earth represents hopelessness for so many more."