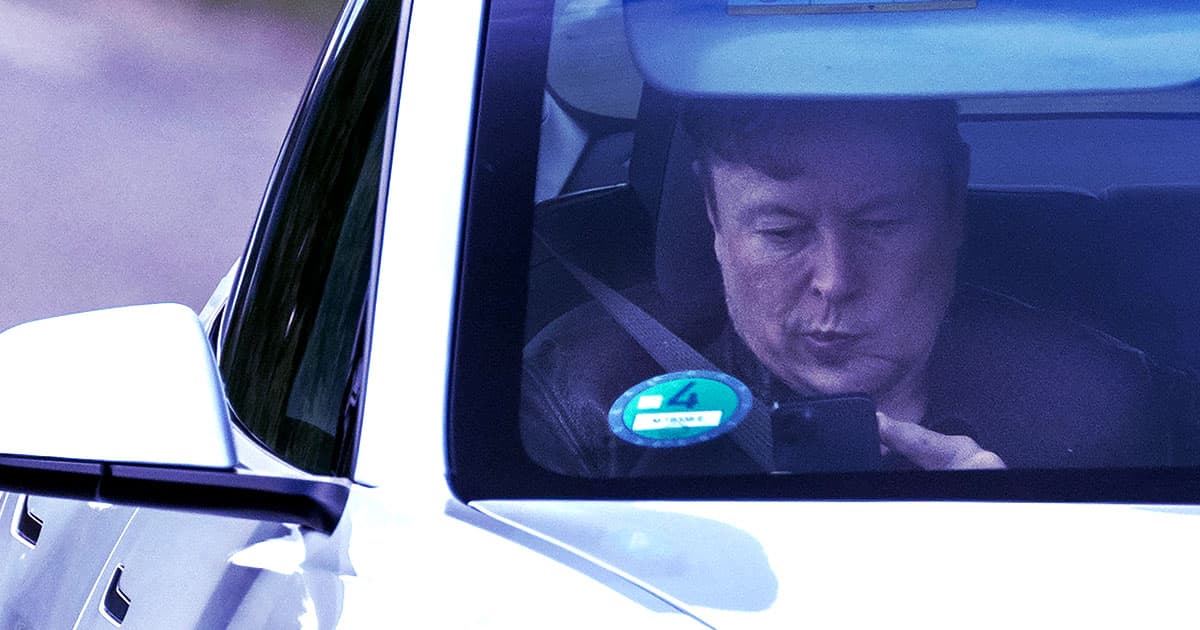 A new supercut video demonstrates that Tesla CEO Elon Musk has been promising that Teslas will drive themselves next year — every year since 2014.

Eagle-eyed viewers might note that the video skips 2017, but Musk actually stepped up his promises that year, pledging in August that a Tesla would make an autonomous trip across the country by the end of that year. The trip, of course, never happened.

It's an unflinching portrait of a man that has gained a lot from reassuring eager investors he will soon come true to his word. While he has indeed delivered on numerous promises, particularly at SpaceX, some of his endeavors — like self-driving cars, electric pickup trucks, electric semis, and Hyperloops — are proving far more difficult to realize.

The clip, which has gone viral on Reddit this week — and uploaded by the unapologetically named YouTube Channel Bullshit Exposed — shows that Musk has been regularly predicting that self-driving cars are less than a year away, while in realty the technology has yet to roll out to the public over half a decade later.

"Autonomous cars will definitely be a reality," Musk assured CNN's Rachel Crane in a 2014 interview. "A Tesla car next year will probably be 90 percent capable of autopilot. Like, so 90 percent of your miles can be on auto. For sure highway travel."

"The basic news is that all Tesla vehicles leaving the factory have all the hardware necessary for Level 5 autonomy," Musk proclaimed in a 2016 interview, referring to a level of still-unrealized capability that would allow passengers to be taken to their destination without the need of a steering wheel or pedals.

Then in 2019, Musk again promised that "I think we will be feature complete — full self-driving — this year," in a podcast interview. "Meaning the car will be able to find you in a parking lot, pick you up and take you all the way to your destination without an intervention, this year."

He went even further at the time.

"My guess as to when we would think it is safe for somebody to essentially fall asleep and wake up at their destination?" he mused. "Probably towards the end of next year."

Needless to say, that hasn't happened. But by 2020, when people were supposed to be dozing off in the driver's seat, he was back to his old tricks again.

"I remain confident that we will have the basic functionality for level 5 autonomy complete this year," he reiterated in a video message recorded for the opening of Shanghai’s annual World Artificial Intelligence Conference (WAIC) in July 2020.

To be fair, nobody could have seen foreseen a seemingly endless pandemic forcing global supply lines to their knees. How much the COVID-19 crisis set back Tesla's efforts to roll out its full self-driving software, however, is unclear.

Credit where credit is due, the car company has made strides in developing its self-driving technologies, releasing an early Beta version of its controversial Full Self-Driving (FSD) software last year.

FSD is an opt-in feature Tesla offers its customers for an additional $10,000, which expands on the company's flagship feature called Autopilot.

But the feature does not in fact allow Tesla vehicles to fully drive themselves, despite its misleading moniker — or at least not yet.

Autopilot has also been embroiled in a number of controversies, and is currently under investigation by US regulators following several incidents involving vehicles that had the feature turned on before colliding with stationary emergency response vehicles.

In fact, just this week, the Associated Press reported that California prosecutors charged a Tesla driver with two counts of vehicular manslaughter after he ran a red light while on Autopilot and crashed into another car, killing two people back in 2019.

Are we really getting a taste of the future of actual self-driving? Is fully autonomous driving really going to materialize this year? Given Musk's track record, that's far from certain.

"Generalized self-driving is a hard problem, as it requires solving a large part of real-world AI," Musk admitted in a July tweet. "Didn’t expect it to be so hard, but the difficulty is obvious in retrospect."

Read This Next
Netflix and Drive
Mercedes Claims to Have Achieved Level 3 Automation, Beating Tesla
Absent CEO
Tesla Investors Furious at Elon Musk for Vanishing During Crisis to Play With Shiny New Twitter
Stay Away
Tesla Is Having Extreme Trouble Hiring, for Some Reason
It Was the Tesla
Manslaughter Case Has a Strange Twist: Tesla That Killed Couple Was on Autopilot
Full Self-Delusion
Survey: 42% of Tesla Autopilot Drivers Think Their Cars Can Entirely Drive Themselves
More on Advanced Transport
Battery Trouble
Yesterday on the byte
Tesla "Spontaneously" Bursts Into Flames While Driving Down Freeway
High Tide
Jan 27 on the byte
We’re in Awe of Amsterdam’s Huge Underwater Bike Parking Garage
Quelle Surprise!
Jan 26 on the byte
Of Course Elon Musk Is Pushing The Cybertruck Back Again, What Did You Expect?
READ MORE STORIES ABOUT / Advanced Transport
Keep up.
Subscribe to our daily newsletter to keep in touch with the subjects shaping our future.
+Social+Newsletter
TopicsAbout UsContact Us
Copyright ©, Camden Media Inc All Rights Reserved. See our User Agreement, Privacy Policy and Data Use Policy. The material on this site may not be reproduced, distributed, transmitted, cached or otherwise used, except with prior written permission of Futurism. Articles may contain affiliate links which enable us to share in the revenue of any purchases made.
Fonts by Typekit and Monotype.