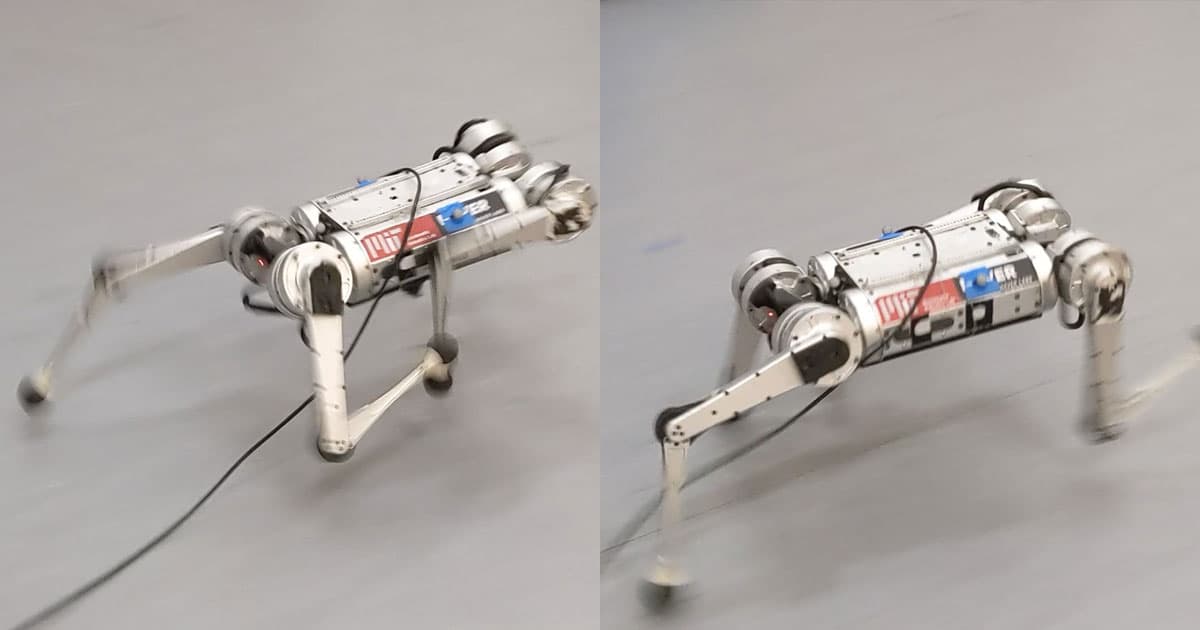 It did manage to break its own speed record, though.

It did manage to break its own speed record, though.

MIT’s long-jumping, back-flipping mini cheetah is at it again — and this time, it’s taught itself how to run.

The engineers behind the robot released a video showcasing its new skills on Thursday. In it, the cheetah is shown bandying about on a variety of terrain including grass, ice, and gravel.

The video adds that the cheetah learned how to run on its own, using AI simulations. This is an update to the robot’s previous human-designed controller that has allowed it to better navigate tougher terrain and even break its own speed record at a whopping 8.7 mph, according to its project page.

"This new learning-based approach lets the robot learn to run in a simulator, using a simple neural network as the controller," the video explained.

The results are… well, hilarious, to be honest. The robot runs more like a newborn toddler on the playground than an agile cheetah in the wild. Still, it’s pretty awesome that it learned to do it on its own.

Check out the results below for yourself:

The AI simulations offer numerous benefits over human-designed controllers. For one, it drastically cuts down training time. In fact, it takes just three hours for the robot cheetah to experience 100 days worth of virtual simulations, Gizmodo reports.

It’s a lot like how Neo learned combat skills in "The Matrix." But instead of kung fu, the robot figures out how to walk a little bit less awkwardly over gravel. Baby steps, right?

This new learning method will allow the robot to quickly and efficiently adapt to any new surroundings it might encounter, the researchers say. For example, if humans need to explore an unknown environment that’s potentially hostile to our weak fleshy bodies, we can simply send in the cheetah and be confident that it’ll be able to take on any terrain challenges ahead.

So MIT’s cheetah is becoming more sophisticated than ever before. Soon, we’ll all be at its mercy when Skynet comes alive.

READ MORE: MIT's Robotic Cheetah Taught Itself How to Run and Set a New Speed Record in the Process [Gizmodo]

More on the robot cheetah: Oh Great, MIT Has Taught Its Cheetah to Leap