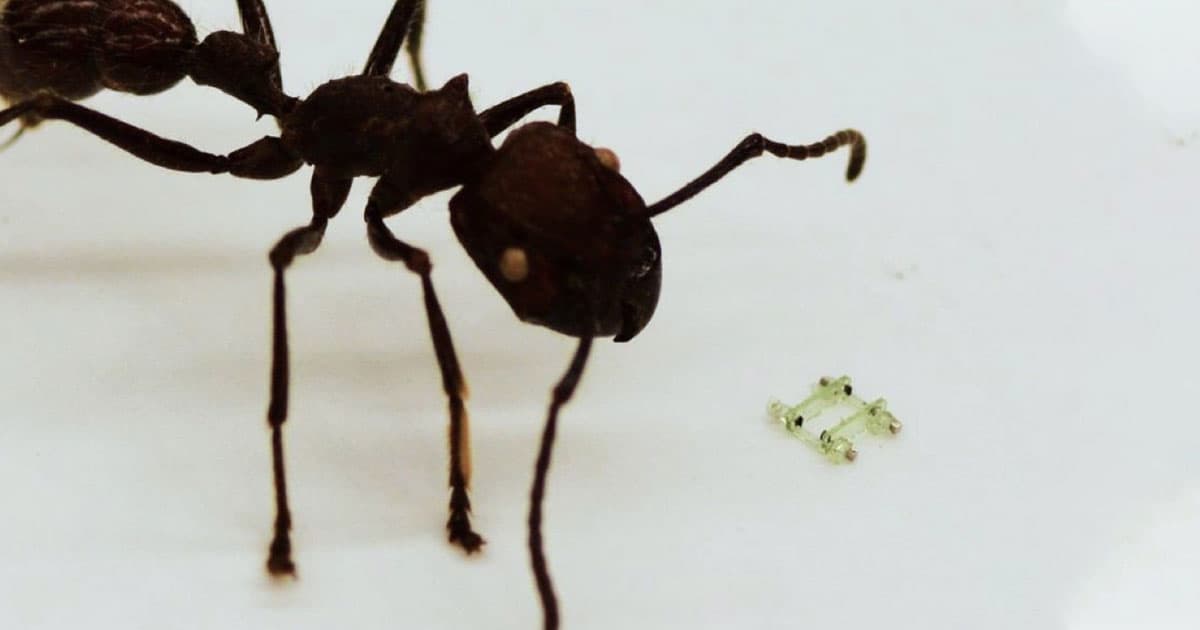 Watch an Adorably Tiny Robot Go for a Teeny Run

The whole robot is only as big as an ant's face.

The whole robot is only as big as an ant's face.

If robots are going to surf through our bloodstreams by 2030, as futurist Ray Kurzweil predicts they will, we're going to need to find a way to make the bots both tiny and mobile.

And if a video released by IEEE Spectrum on Thursday is any indication, we're on the right track.

The clip features a microbot created by Ryan St. Pierre from the University of Maryland running surprisingly fast for its size — which is about the same as that of an ant's face.

According to IEEE Spectrum, the robot is 2.5 millimeters long and weighs just one milligram — vastly smaller than a grain of rice. That's too small to support traditional motors, so St. Pierre embedded magnets in the bot's hips. He then created a rotating magnetic field around the robot to force the embedded magnets to rotate and move the bot's legs.

Other researchers are already exploring the use of magnets to control microbots designed to navigate the human body, so the insights gleaned from St. Pierre's research could put us one step to having armies of robots keeping us healthy from the inside.

More on microbots: Magnetically-Controlled Organic Microbots Could Change Medicine in the Next Decade

Thanks, but No Thanks
Oakland Police Want to Arm Robots With Shotguns, Because We Live in a Dystopian Nightmare
10. 17. 22
Read More
Unholy Diver
Terrifying Humanoid Diving Robot With "Human" Sense of Touch Explores Shipwreck
8. 1. 22
Read More
Butthole Surfers
Scientists Drive Tiny Robot Around Inside Living Butthole
10. 21. 20
Read More
+Social+Newsletter
TopicsAbout UsContact Us
Copyright ©, Camden Media Inc All Rights Reserved. See our User Agreement, Privacy Policy and Data Use Policy. The material on this site may not be reproduced, distributed, transmitted, cached or otherwise used, except with prior written permission of Futurism. Articles may contain affiliate links which enable us to share in the revenue of any purchases made.
Fonts by Typekit and Monotype.