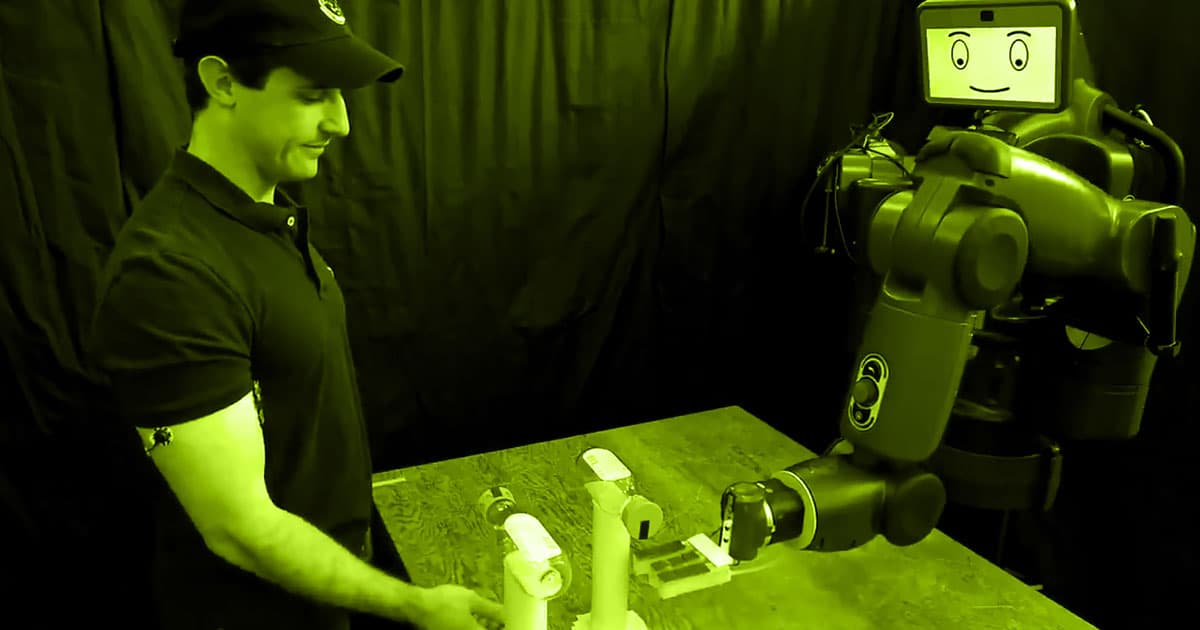 It’s kinda hard to kick anything when you don’t have legs.

It’s kinda hard to kick anything when you don’t have legs.

In the world of robotics, Baxter is something of a celebrity, and now, the bot is starting to act like one — by putting its own twist on the latest viral trend.

In a newly published video, Baxter uses this talent to follow in the footsteps of Ryan Reynolds, Mariah Carey, and other celebs by tackling the viral #BottleCapChallenge.

If you've spent any time at all on the internet in the past few weeks, you're likely already familiar with the #BottleCapChallenge — essentially, a person just films themselves unscrewing a bottle cap in an inventive way that typically involves a badass 360-degree kick.

Baxter doesn't have legs, so the standard unscrewing method wasn't an option for the MIT team. Instead, they tweaked the bot's "hand," adding a soft, flexible gripper that could bend around the bottle cap, CSAIL grad student Joseph DelPreto told Digital Trends.

After that, they had Baxter watch as DelPreto knocked a cap off one bottle, and sure enough, the robot mirrored his motions — perhaps earning the honor of delivering the most high-tech #BottleCapChallenge to hit the 'net yet.

READ MORE: MIT whiz kids got a robot to take on the viral #BottleCapChallenge [Digital Trends]

More on Baxter: Robots and Humans Need to Learn How To “Talk” to One Another

Robots and Humans Need to Learn How To "Talk" to One Another
10. 22. 17
Read More
Watch Santa Fly in Style With This Custom-Designed Drone
12. 22. 16
Read More
Monkey Business
Yuga Labs Files Furious Lawsuit Against Guy Minting Copies of Bored Apes
3:44 PM
Read More
+Social+Newsletter
TopicsAbout UsContact Us
Copyright ©, Camden Media Inc All Rights Reserved. See our User Agreement, Privacy Policy and Data Use Policy. The material on this site may not be reproduced, distributed, transmitted, cached or otherwise used, except with prior written permission of Futurism. Fonts by Typekit and Monotype.