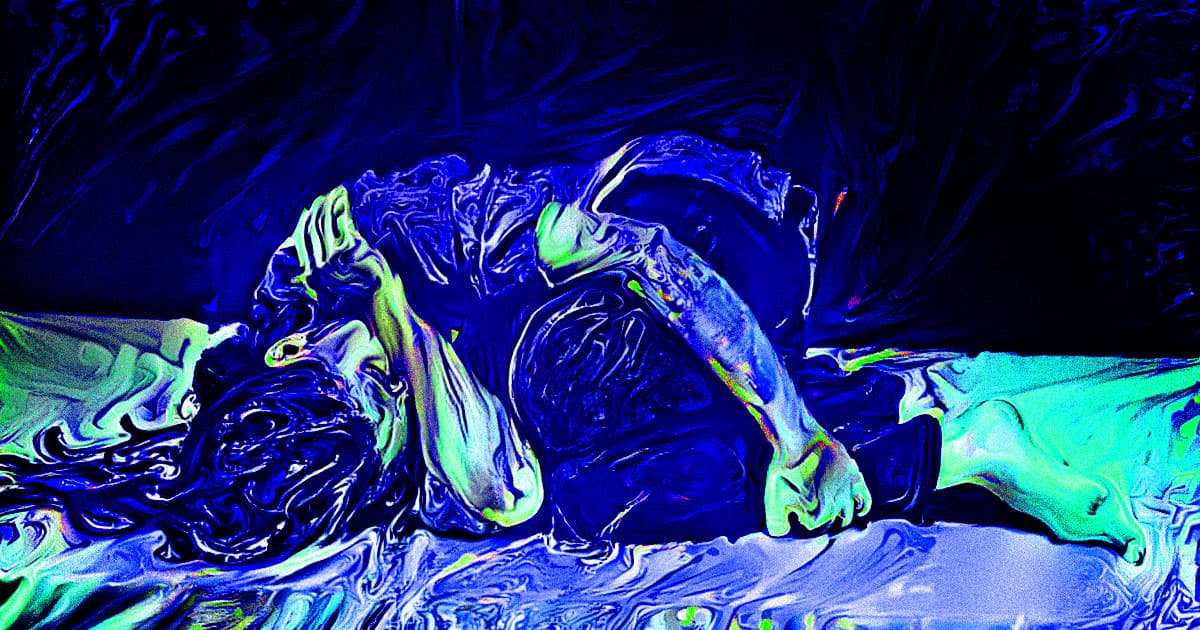 The hallucinogen has been known to create intense and deeply metaphysical trips akin to near-death experiences. It can bring on profound spiritual awakenings, and can even result in “ego death” that shreds your sense of space, time, and self.

While DMT has attracted a community of loyal devotees who turn to it for spiritual enlightenment and fun trips, now it’s starting to get the attention of a vastly different group: pharmaceutical investors. The business of psychedelics is currently undergoing a boom, as scientists learn more about the mind bending substances’ potential for treating mental health issues including post-traumatic stress disorder (PTSD) and depression.

While many pharmaceutical companies have been investigating the potential health benefits of party drugs including LSD, MDMA, ketamine and psilocybin mushrooms, a few players are now exploring DMT as well. Advocates say the drug offers some of the most promising results, especially for patients with treatment-resistant depression. Perhaps most intriguingly, some even suggest that the "entities" that trippers frequently encounter on DMT could play a unique role in the therapeutic process.

"There’s a significant unmet medical need," Dr. Carol Routledge, the chief medical and scientific officer at Canadian pharmaceuticals company Small Pharma, told Futurism. "Of course, there are treatments for major depressive disorder, like SSRIs, but there's a huge underserved population because these treatments don't work for everybody and they have side effects too."

The primary focus of Small Pharma’s work is combining DMT along with regular therapy sessions, with the goal of helping people with serious depression.

The process won’t require patients to travel out into a remote desert or the wilds of the Amazon to take ayahuasca from a shaman, either. Instead, patients will be taken to a comfortable dosing room complete with salt lamps and low lighting to create a relaxing ambience. The patients also undergo initial therapy to prepare for the experience.

Then, they’re given an intravenous dose of DMT, and the therapist sits quietly with them throughout the duration of their trip for about "20 to 25 minutes," according to Routledge. After the trip, the patient undergoes an integration therapy session that’s part aftercare and part debrief, where they’ll answer questions and detail their psychedelic experiences.

"It helps the subject to make sense of the experience they've just gone through," Routledge explained. "We think that's useful and helpful for the patient, and it’s also important for the therapeutic aspects of the treatment."

Whether or not it’ll actually work is still a major question mark. In September, the company completed phase one clinical trials — the first company to do so, Routledge says — in which it dosed psychedelically-naïve volunteers without major depression, just to demonstrate that the process is physically safe. Now, it’s moving into phase two trials that’ll dose patients with major depressive disorder, in a more serious test of its thesis.

However, there are some indicators that it could not only work, but perhaps even have a profound and positive impact on patients’ psyche.

"DMT can really blow your mind," Rick Strassman, adjunct associate professor of psychiatry at the University of New Mexico School of Medicine and author of "DMT: The Spirit Molecule," told Futurism. "You can attain insights or remember things that you previously weren’t aware of, which could be influencing or causing your depression."

For more than 20 years, Strassman has devoted his career to the study of DMT and other psychedelics. His book "DMT: The Spirit Molecule" was later adapted into a documentary narrated by controversial podcast host Joe Rogan in 2010. Strassman believes that there’s already at least some evidence that DMT-assisted therapy could be beneficial to those with treatment-resistant depression.

In fact, he says that one surprising element of DMT trips that could help those with major depressive disorder are the aforementioned entities often known as "elves," which are beings that many DMT users say they encounter during trips.

"When you’re in the DMT world, they just appear," Strassman explained. "They can coalesce or merge out of the swirling geometric forms going on. They can also look like anything: aliens, bees, a cactus, a machine, a robot, or an African warrior princess."

He says that if you "subscribe to the notion" that the entities are there to help you, then there’s a good chance they help you through specific psychological issues like major depression or PTSD.

This isn’t just anecdotal. A 2020 study published in The Journal of Psychopharmacology, for instance, surveyed 2,500 individuals who encountered entities after taking an intravenous or inhaled dose of DMT. The researchers discovered the majority of respondents attributed emotions like "love, kindness, and joy" to the entities.

The participants also tended to attribute positive, growth-associated labels to the entities, such as "being, guide, spirit, alien, and helper." In fact, most respondents said that their encounters with the beings were "among the most meaningful, spiritual, and psychologically insightful" experiences of their lives.

Perhaps most striking, though, was yet another data point that highlights the power of the substance: more than half of participants who identified as atheists before the experience no longer identified as such after their encounter with the entities.

In other words, the study’s findings are in line with Strassman's belief that since the entity contact occurs relatively often and intensely with DMT when compared to more common psychedelics like LSD or psilocybin, it could offer a "unique beneficial feature" to patients who believe the beings are helping them. It may even be especially powerful when an individual takes these entities and couples them with their own personal spiritual frameworks.

For example, if you’re a Catholic, you might believe these beings are angels sent by God to help you. Or Buddhists might believe that they’re a part of an enlightenment experience. These spiritual models can help people deal with the beings in a "safe and effective" way, according to Strassman.

The entities are also on Small Pharma's radar as well. Routledge told Futurism that the phenomena is "likely beneficial not just for the treatment of depression but also other internalizing disorders."

There’s also physiological evidence of how DMT might help treat depression. Research has shown that the drug seems to encourage neurogenesis, meaning the growth of new neurons in the brain, and neuroplasticity, meaning the way neurons establish new networks and connections. These factors may be correlated with the "antidepressant effects of DMT," Strassman said.

The connections Small Pharma is looking at specifically are known as the "default mode network." This is a neural system that becomes engaged when a person daydreams or lets their mind wander, and researchers believe it becomes overactive in depression, leading to cycling negative thoughts.

DMT "suppresses that overactivity by making those inflexible neural connections more flexible," Routledge said. "Psychedelics also stimulate a number of serotonin receptors in the brain and cause brain plasticity. That can also have an effect on those neural connections."

"We think the therapy following the DMT dosage helps lay down the new connections that are being made in the patient’s brain during the psychedelic experience," Routledge explained. "It helps to move the patient out of the experience into a more positive setting and helps cement those networks."

DMT also offers relatively shorter psychedelic experiences, typically around just 20 to 30 minutes, compared to other drugs like psilocybin and LSD, which can drag on for many hours. That’s appealing for companies like Small Pharma, because if you can treat depression in a shorter duration, that’s less time and money spent caring for the patient.

"The short psychedelic experience means that even with wrap-around therapy, the total treatment duration is approximately two hours," Routledge explained. "So this is very clinically flexible and easy to administer."

She also said that research suggests that even a short-duration psychedelic experience from DMT "should provide at least the same efficacy as psilocybin."

And if you’ve ever heard rumors that DMT can cause psychological problems, experts say the risk is slim.

"Based on the mechanism and the receptors that DMT stimulates, there’s no evidence — even in academic trials — that DMT causes psychosis on its own," Routledge said.

Strassman offered a similar explanation, saying that DMT can act as a trigger to psychosis — especially if you or your family has a history of mental health problems. Some past research backs up those claims, finding that those with existing mental health issues have a higher risk of psychosis after using psychedelics. But beyond those risk categories, according to Strassman, your chances of losing your mind are "slim to none."

There are stories out there, though, that might cause some to reconsider this as a treatment. For example, a 2017 case study revealed that one physician’s attempt to self-medicate his bipolar disorder with DMT resulted in a psychotic episode that landed him in the hospital.

Granted, he was taking one gram of DMT a day, which is an astonishingly high dose. He was also bipolar. Mania — a symptom of bipolar disorder — puts you at a much higher risk of experiencing psychosis after using DMT.

But still, that remote chance is enough to give anyone pause before dealing with a psychedelic — especially if you’re dealing with mental health issues already. The question of how psychedelic therapy will address those with major depression and a history with psychosis will remain to be seen as well.

There’s also the fact that the biotechnology companies behind these potential treatments are, at the end of the day, fueled by profit. Ultimately, investors will expect them to make money. Sure, DMT could really help a lot of people, but it'd be doing so at the behest of corporations focused on the bottom line — and we’ve seen the dangers of that problem plenty of times before.

And regardless, we’re still in the nascent stages of medical DMT study. More research and experiments need to be conducted before you can start tripping on the spirit molecule with the go-ahead from your doctors.

However, Strassman is hopeful of the drug’s future as a treatment for depression, if somewhat cautious. While he’s wary of over glorifying the potential benefits of DMT, he believes that it can ultimately be a bold — and trippy — way of dealing with the pain and trauma we humans regularly encounter in the real, non-spirit world.

"We need to be just, and righteous, and kind, and compassionate," he said, "and keep our eyes open about what's around the corner."