There's an invisible party on your tongue. 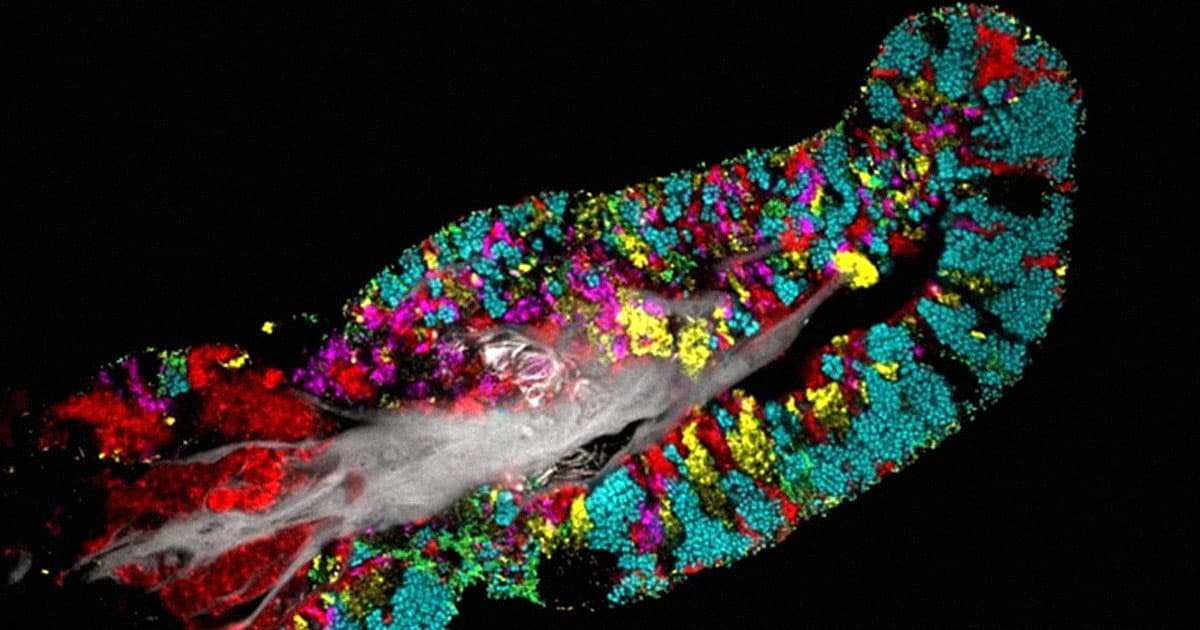 Your mouth is a zoo of bacteria. And in a new series of astonishing (ly disturbing) images assembled by a team of researchers, we get to experience this diverse biome in all its psychedelic, multicolored glory — with each funky color representing a different species of bacteria, as Science Alert reports.

"The tongue is particularly important because it harbors a large reservoir of microbes and is a traditional reference point in medicine," said Jessica Mark Welch, co-author of the study published in the journal Cell Reports and microbial ecologist at the Marine Biological Laboratory in Massachusetts, in a statement. "'Stick out your tongue' is one of the first things a doctor says."

"We think that learning who is next to who will help us understand how these communities work," Welch added.

The species range from Streptococcigreen around the edges of the tongue where they can gobble up oxygen, shown in green, to actinomyces, which thrive in an anaerobic environment away from the edges, in red. Rothia, shown in cyan, keeps away from either of those border regions.

In total, there are more than 700 species of bacteria that call our mouths their home. however, the three genera of bacteria identified above were found in 80 percent of the 21 healthy tongues the researchers collected samples from.

To separate these oxygen-rich and -poor environments, the bacteria form layers of protective slime referred to as "biofilm."

"Bacteria behave differently in a biofilm," co-author Mark Welch said. "There are parts of their metabolism they only turn on in a biofilm, and they tend to be more resistant to antibiotics and changes in the environment."

The scientists' research also suggests that small bumps on the surface of the human tongue exist to allow certain kinds of bacteria to create nitric oxide, an important chemical for controlling blood pressure — a process that the human body isn't capable of taking care of by itself.

Read This Next
What Lies Beneath
Researchers Say "Conan the Bacterium" Could Be Hidden Beneath Mars’ Surface
Brands We Love
Microbes Are Making Merry on Your Mattress. But These Bed Sheets Can Put a Stop to It.
Brands We Love
This Health Intelligence Test Examines Your Health on a Cellular Level
Brands We Love
Research Shows Link Between Gut Health And Healthy Immune Systems
Brands We Love
There's a Biohazard in Your Bedroom. But These Bacteria-Resistant Bed Sheets Can Help.
More on Hard Science
It From Bit
Nov 22 on the byte
A Scientist Is Crowdfunding an Experiment to Check if We Live in a Simulation
Water Carrying
Nov 20 on the byte
Evidence Grows That Soggy Meteorites Gave Earth Its Oceans
Shroom News
Nov 20 on the byte
Scientists Build Circuit Boards Based on Mushrooms
READ MORE STORIES ABOUT / Hard Science
Keep up.
Subscribe to our daily newsletter to keep in touch with the subjects shaping our future.
+Social+Newsletter
TopicsAbout UsContact Us
Copyright ©, Camden Media Inc All Rights Reserved. See our User Agreement, Privacy Policy and Data Use Policy. The material on this site may not be reproduced, distributed, transmitted, cached or otherwise used, except with prior written permission of Futurism. Articles may contain affiliate links which enable us to share in the revenue of any purchases made.
Fonts by Typekit and Monotype.