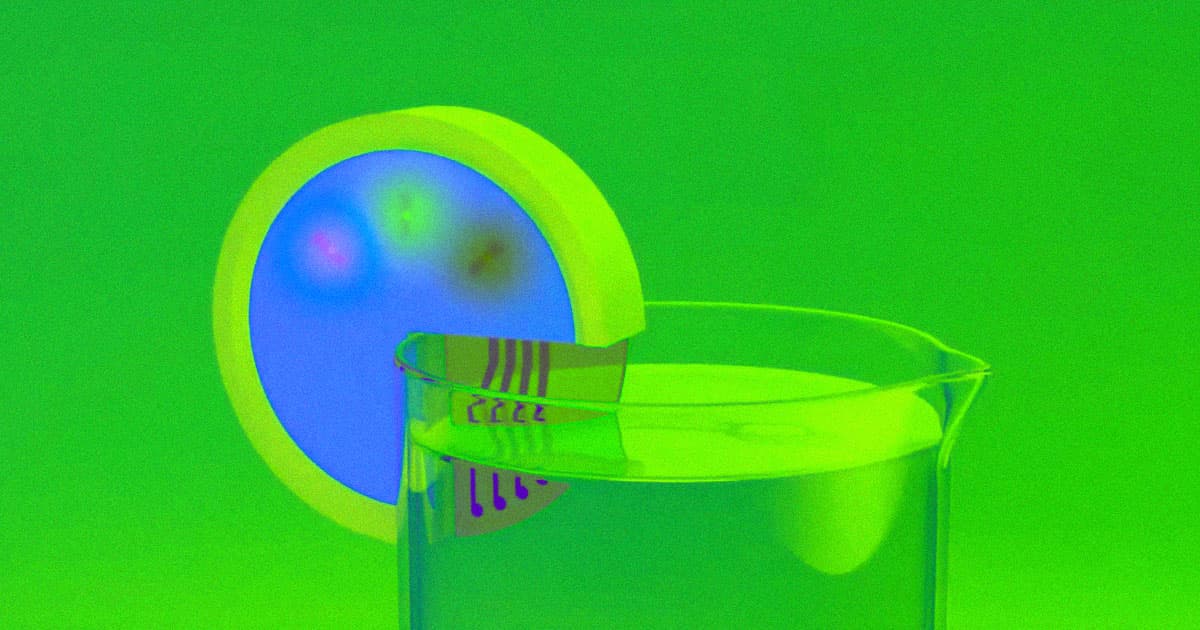 It can detect and match a liquid's "fingerprint" in less than a minute.

It can detect and match a liquid's "fingerprint" in less than a minute.

"Electronic tongues" are devices that can analyze materials just by coming in contact with them — and they have near-infinite applications, from testing water quality to ensuring an expensive wine isn't a counterfeit.

The problem is most fall into one of two categories: portable and specialized for only certain materials, or stationary and versatile. But now, IBM researchers have unveiled a new electronic tongue capable of bridging gap, making it easier to identify a range of liquids on the fly.

The IBM team calls its electronic tongue Hypertaste, and it looks a bit like a drink coaster with a slit in its side.

This slit allows the device to rest on the edge of a glass of liquid, not unlike a circle of lime in a margarita. Once in this position, an array of electrochemical sensors in the now-submerged part of Hypertaste can sense the presence of molecule combinations in the liquid.

The sensors then react to those molecules by producing measurable electrical signals that, when consider together, "give you something like a fingerprint of the particular liquid," researcher Patrick Ruch recently told Engadget.

Once Hypertaste has this fingerprint, it transmits it to a mobile device, which in turn, sends it to a cloud server. There, an AI compares that fingerprint to the fingerprints of known liquids, and sends the closest match back to the mobile device.

The whole process from submersion to match takes less than a minute, according to an IBM blog post, and the device can identify any liquid whose fingerprint is added to the database — setting it apart from most of today's electronic tongues.

More on tasting tech: Robot Arm Uses Bacteria in Its Fingers to "Taste" Its Environment

Just Log Off
New AI Is Designed to Debate People, and It Could Ruin Social Media
3. 25. 21
Read More
Checkmate
Chess Grandmaster Kasparov: I've Made "Peace" With Robot That Beat My Ass
2. 21. 20
Read More
Human-like Learning
IBM's New AI Does Something Amazing: It Learns From "Memories"
4. 5. 19
Read More
+Social+Newsletter
TopicsAbout UsContact Us
Copyright ©, Camden Media Inc All Rights Reserved. See our User Agreement, Privacy Policy and Data Use Policy. The material on this site may not be reproduced, distributed, transmitted, cached or otherwise used, except with prior written permission of Futurism. Articles may contain affiliate links which enable us to share in the revenue of any purchases made.
Fonts by Typekit and Monotype.