NASA is at the forefront of groundbreaking space exploration — but when it comes to diversity, it's falling seriously short. 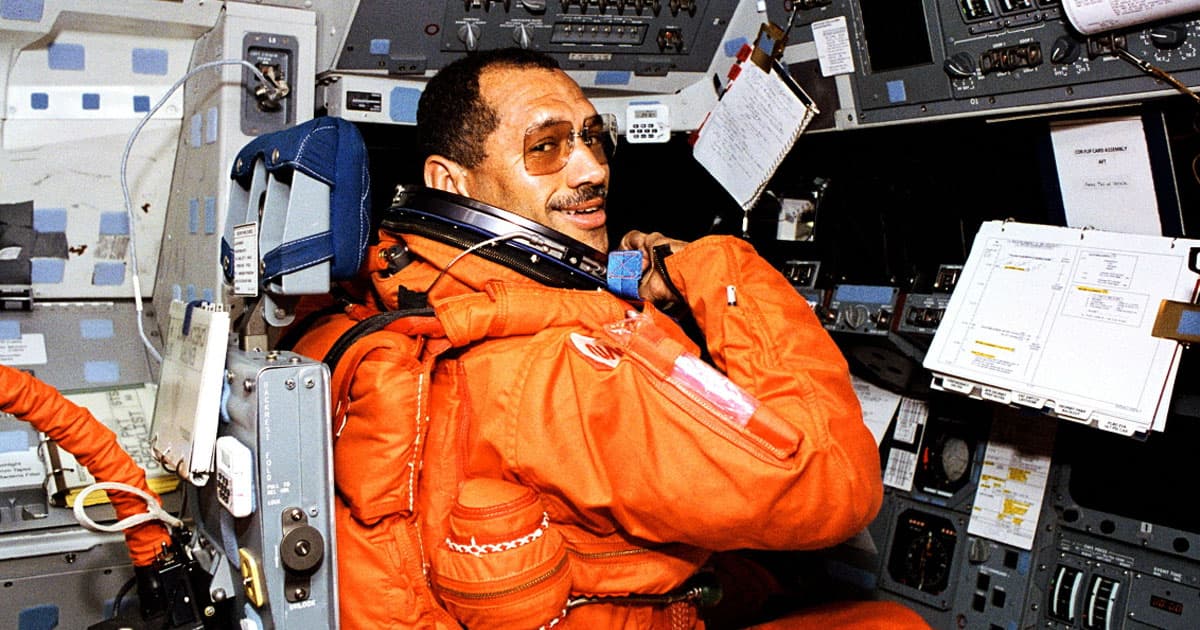 Charles Bolden recalls that he and his wife were driving on a road outside of Pasadena, Texas when they saw a giant billboard emblazoned with a menacing message: "Welcome to Pasadena, Heart of the Ku Klux Klan."

The year was 1980. Bolden had just been selected by NASA to become an astronaut, so his family moved to the Houston area to be near the Johnson Space Center. While he and his wife had both grown up Black in the segregated south, he had spent years away from the area after joining the military and serving in the Vietnam War. So the billboard’s message — accompanied, he remembers, by the image of a hooded Klansman riding a white horse — shook him.

"We had been away from it for so long — for decades even — only to find that we now had to pass that sign just to go get our lights turned on in the house, to connect our phone, and stuff like that," Bolden, shown on board the Space Shuttle above, told Futurism.

After a stint at the agency that included four flights to orbit and more than 680 hours on board the Space Shuttle, Bolden would go on to be appointed by President Barack Obama to become the first Black NASA administrator in 2008.

But despite that landmark appointment, NASA's most visible employees — the astronauts who actually go to space — have remained overwhelmingly white.

To date, more than 360 people have participated in NASA’s astronaut program. Of all of them, just 15 have been Black — only about four percent of all astronauts, despite the fact that African Americans make up 14 percent of the US population.

Similarly, NASA has launched or has enrolled 17 Asian and 16 Hispanic astronauts, including partnerships with international programs such as Japan's JAXA. That's just roughly four percent of astronauts for each group, despite Asian people making up seven percent of the US population and Hispanic people making up about 18 percent. On top of all that, just one astronaut has been of Native American descent — a fraction of one percent of the total.

The inescapable conclusion: NASA continues to struggle, in a serious way, with diversity in its astronaut corps. And for a part of the government with unparalleled power in shaping the practice and narrative of scientific research and space exploration, that's a major problem.

"It's systemic," Bolden told Futurism. "People don't like that word, but it's the way the system has developed and was built."

There have been recent attempts by NASA to highlight its history of inclusion, but the fact is that the famed Mercury, Gemini and Apollo missions were 100 percent crewed by white astronauts. In fact, the world's first Black astronaut, Arnaldo Tamayo Méndez, was launched in 1980 not by the United States but by the USSR.

After the debut of the Space Shuttle in 1981, NASA seemed to be heading in the right direction.

However, those figures started to slide backward during the 2010s.

The Shuttle was retired in 2011, and NASA saw a massive drop in the overall number of astronauts it was sending to space, launching just 18 total throughout the 2010s, all on Russian-operated Soyuz spacecraft. Even in that smaller pool, though, the share of non-white astronauts slid to just 16 percent. In fact, between the years 2012 and 2019, NASA didn't send a single Black astronaut into orbit.

In light of that less-than-stellar trajectory, how the agency's diversity efforts will fare during the 2020s remains an open question.

With SpaceX now successfully shuttling NASA astronauts to the ISS — not to mention private space tourists — we've seen a hopeful uptick in astronauts across the board. NASA's SpaceX-contracted Crew-1 and Crew-2 missions saw five American astronauts get launched into space, with Victor Glover being the only person of color among them. While that's a small sample size, it's still 20 percent, which means that so far, the 2020s are pacing the 2000s for NASA's most diverse diverse decade for its astronaut crews.

Still, even 20 percent is a long shot from the approximately 38 percent of Americans who aren't white. Until NASA can close that gap, its astronauts won't reflect its population.

Bolden is quick to clarify that none of this is just a NASA problem, which is true. Black and brown folks are underrepresented both in the world of business, scientific and engineering industries, and many other areas of public life.

Those inequities and more compound in ways that are both invisible and insidious. Minority students at every level are discouraged by the perception that science and technology doesn't have room for them. There's also a persistent racial wealth gap in the United States, and families with fewer financial resources are less able to fund the kinds of advanced education and internships that can lead to a position in the competitive aerospace industry.

All that and more contributes to a vicious cycle, with people from poor and minority communities less likely to meet and connect with scientists or engineers, nevermind astronauts, meaning that those career trajectories continue to feel abstract and unachievable.

At the end of the day, it adds up to an apparatus that — even though countless individual players at NASA and beyond want to change it — perpetuates an unjust status quo. And the result is that minority kids look at NASA's astronaut corps and see faces that don't reflect them, or even reflect America.

"The system isn’t broken," Bolden said. "This is the system."

A non-diverse workforce also presents a certain kind of danger too, Bolden added. It’s something that the military is aware of — and one that NASA should be aware of too.

"If we are to compete with global adversaries like China or Russia, we’re not going to be able to beat them with the same old thinking," he said. "If we don’t start changing the way we think with some diversity and new perspectives, they will rapidly catch up and get ahead of us."

Reached for comment, NASA said that not many people of color apply to the astronaut program in the first place.

"The bottom line is that the percentage of Black and brown people that apply to be NASA astronauts is very small," a spokesperson for the agency told Futurism.

For example, of the 6,113 people who applied to be a part of the 2013 astronaut class, just 3.8 percent were Black, according to data provided by the agency. Just one of the eight astronauts selected — Glover — is Black.

More recently, the 2017 application allowed people to choose not to disclose their race. Roughly 25 percent of the 18,300 applicants chose not to, according to NASA. Of the applicants who did, though, just 2.6 percent were Black. And in the end, just one of the 12 who were chosen for the class — Jessica Watkins, scheduled to depart for the ISS in a SpaceX Crew Dragon this spring — is Black.

One radical but potentially effective action NASA could take? Move. The agency’s geographic locations almost unquestionably play a significant reason in why it's lagged in attracting minority talent.

NASA's locations in the Deep South "without a doubt" play a role in the problem, Bolden said. From Houston to Cape Canaveral, these locations have historically been inhospitable to people of color and other marginalized groups. And while the agency has itself been relatively welcoming to its workers of color, the same can’t be said for its surrounding communities.

"There weren't many Black engineers and scientists by the time I got to Houston in 1980, but there was a healthy number," Bolden recalled. "And almost every single family had started out living up in Houston about 25 miles up the road from NASA's facilities, because they couldn't buy or rent houses in the Clear Lake area near what became the Johnson Space Center. "

Of course, POC have lived in these places throughout much of American history, and they still live there to this day. But while some of the most flagrantly discriminatory practices have faded with time, there's no doubt that a racist legacy is still very much embedded in the fabric of the region.

It also doesn't help that NASA often turns to the same talent pools at Ivy League schools like Harvard, Yale, and Princeton, along with prestigious institutions like MIT. The result is a homogenized workforce of mostly white, male workers who come from privileged backgrounds.

The agency has increasingly conducted targeted outreach to historically black colleges and universities (HBCUs) and other more diverse educational institutions, the NASA spokesperson and Bolden both emphasized.

"What's happened now is that NASA is now looking into HBCUs, and other minority serving institutions like tribal colleges that serve indigenous and pacific islanders for talent," Bolden said. "When you go to those places to look, you find that there are people who are just as talented as people who come out of Harvard."

The agency has a long way to go. But with the upcoming Artemis missions, which are slated to include the first person of color and the first woman on the Moon, there's also a lot to be hopeful about.

Another glimmer of hope is the upcoming launch of NASA astronaut Watkins, who in April is set to become the first female Black astronaut to spend months aboard the International Space Station. The previous record by a Black woman astronaut was Stephanie Wilson, who spent 43 days in space. It won't solve the agency's galling astronaut diversity gap, but it's an overdue step in the right direction.

"Color and gender and race and stuff like that, we find, doesn't really make a difference when it comes to talent," Bolden said, speaking of astronauts. "It's just that they're really highly motivated people. I think Jessica's going to be the exact same way."

More on NASA: NASA Plans to Land First Person of Color on the Moon in Artemis Program