Everything you need to upgrade your home office or gaming rig, at a major discount. 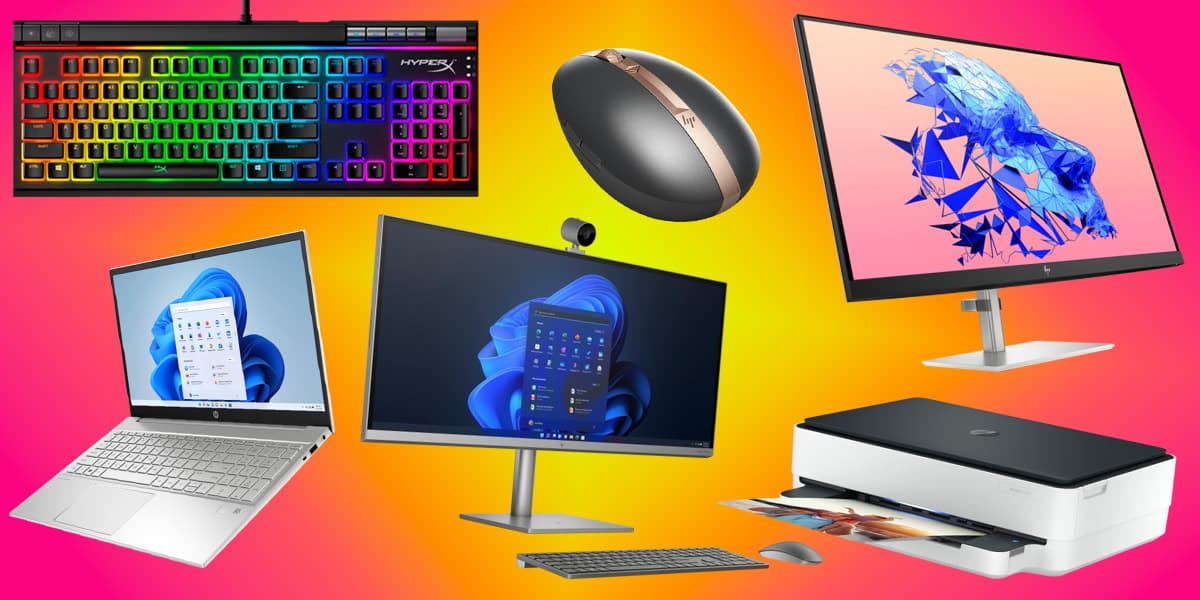 As the summer draws to a close, soak up the last bits of sun, break out the barbecue for a couple more cookouts, and of course, save tons of money with Labor Day weekend’s biggest sales. If you’ve been waiting to update your old gaming tech or bring your home office gear up to date, now is the best time to cash out on some great deals.

With every angle of your desk covered, from laptops to headsets, and webcams to printers, HP’s Labor Day deals can save you hundreds on everything you need. Whether you’re a PC-gaming champ, an occasional online shopper, or a full time YouTuber, save your cash and complete your set up with the best HP deals this Labor Day weekend.

A laptop is one of the most essential staples on your desk, at a cafe, or on the go. The HP Laptop 17-cn0097nr is designed for home use, portable workstations, or entertainment any time. With its 17-inch anti-glare, 1920 x 1080 resolution screen and precision touchpad, this laptop accommodates every setting. Running the latest Windows 11, you can be sure that this powerful, little laptop will keep up with you as you jump from task to task. This laptop charges fast, so you can work away from your first cup of coffee of the day to quitting time.  The Pavilion could become your favorite everyday tool, and for $300 less than the usual price, there couldn’t be a better time to buy.

For business and pleasure alike, look no further than the HP ENVY All-in-One desktop. With every aspect of your setup incorporated into one sleek, little package, you’ll save desk space, as well as time and money spent searching for compatible add-ons. For less than $1,800, get your computer, monitor, speakers, webcam, keyboard, mouse, and even wireless phone charger — a deal that truly needs to be seen to be believed.

The All-in-One features a 34-inch, 21:9 display, so you can see your work in a high resolution, perfect for photo and video editing, art, games, and shows. The magnetic, detachable camera can be used for the usual video call, or move it around to show off different angles of your work or room. Enjoy audio from Bang & Olufsen through two built-in speakers while you work wirelessly with your Bluetooth-compatible mouse and keyboard — or plug in your preferred, wired accessories with one of its many ports. As if all of this wasn’t enough, you can charge up your phone with the base of your monitor, which doubles as a wireless charger. Deals like these aren’t common, so be sure to grab it while it’s $270 off.

Just in time for the new school year, print, copy, and scan, all from one affordable piece of tech. The ENVY All-in-One Printer is a versatile, sleek tool that sits on any tabletop comfortably, and supports all of your household’s document or photo needs. Made from recycled electronics, and ink cartridges made from recycled plastic, this is a great choice for the sustainably minded buyer.

The ENVY makes printing from anywhere a breeze with the HP Smart app, so you can print, scan or copy photos, emails, and anything else, right from your phone, tablet, or laptop. With WiFi, Bluetooth capabilities, and a smart control panel, this printer is highly innovative, yet affordably priced. With this purchase, you’ll also receive two years of ink delivered straight to your door. When your ink levels are low, new cartridges are sent out automatically, and at a discounted price, so you’ll never have to worry. Buying now will save you $30 on an already fantastic price, but these deals won’t last long, so be sure to grab it while you can.

A perfect addition to your tricked-out gaming setup, streaming base, or editing studio, the HyperX Alloy Elite 2 Keyboard is equipped for customization, to bring control to your fingertips. The solid steel frame and mechanical keys create a weighted, sturdy feeling to avoid slipping or fumbling when typing or gaming away. Easily adjust your audio with a large volume wheel, swap between media, profiles, and Game Mode with dedicated keys, and customize your per-key lighting and effects.

For a more unique, bright aesthetic, the HyperX Alloy Elite 2 incorporates translucent ABS pudding keycaps and a light bar with RGB effects, so you can switch between work mode and gaming mode, or keep the party going all day long. This keyboard features multi-platform compatibility, so you don’t have to change out your gear when swapping between PC or console gaming. For such a multi-functional piece of equipment, this incredible price really sweetens the deal. And, with $40 off, you can even grab yourself a game with the money saved to test out your snazzy, new keyboard.

Get the accuracy and reliability you need with the Spectre Rechargeable Mouse 700, and for $24 off. With 1,200 Dots Per Inch (DPI), this sleek mouse boasts of exceptional accuracy and response on nearly any surface. Completely wireless and weighing in at .2 pounds, its lightweight build makes gaming, working, or casual browsing effortless, without unnecessary wires interrupting your flow.

This rechargeable mouse will last you months; HP says one charge can get you up to 11 weeks of use. Setting up the Spectre mouse is a seamless process, and it can be paired with up to four compatible devices, making it super easy to alternate between your laptop, desktop, tablet, and back. This great deal makes the Spectre 700 an easy choice, but if you’re unsure if it’s up to snuff, it also comes with a one-year warranty for your peace of mind. At just over $40 and with such universal use, this mouse is easily one of the best Labor Day deals on mice from HP.