For the First Time, Scientists Have Measured the Earth's Ability to Absorb Neutrinos

They used 5,160 sensors buried in ice for their calculations. 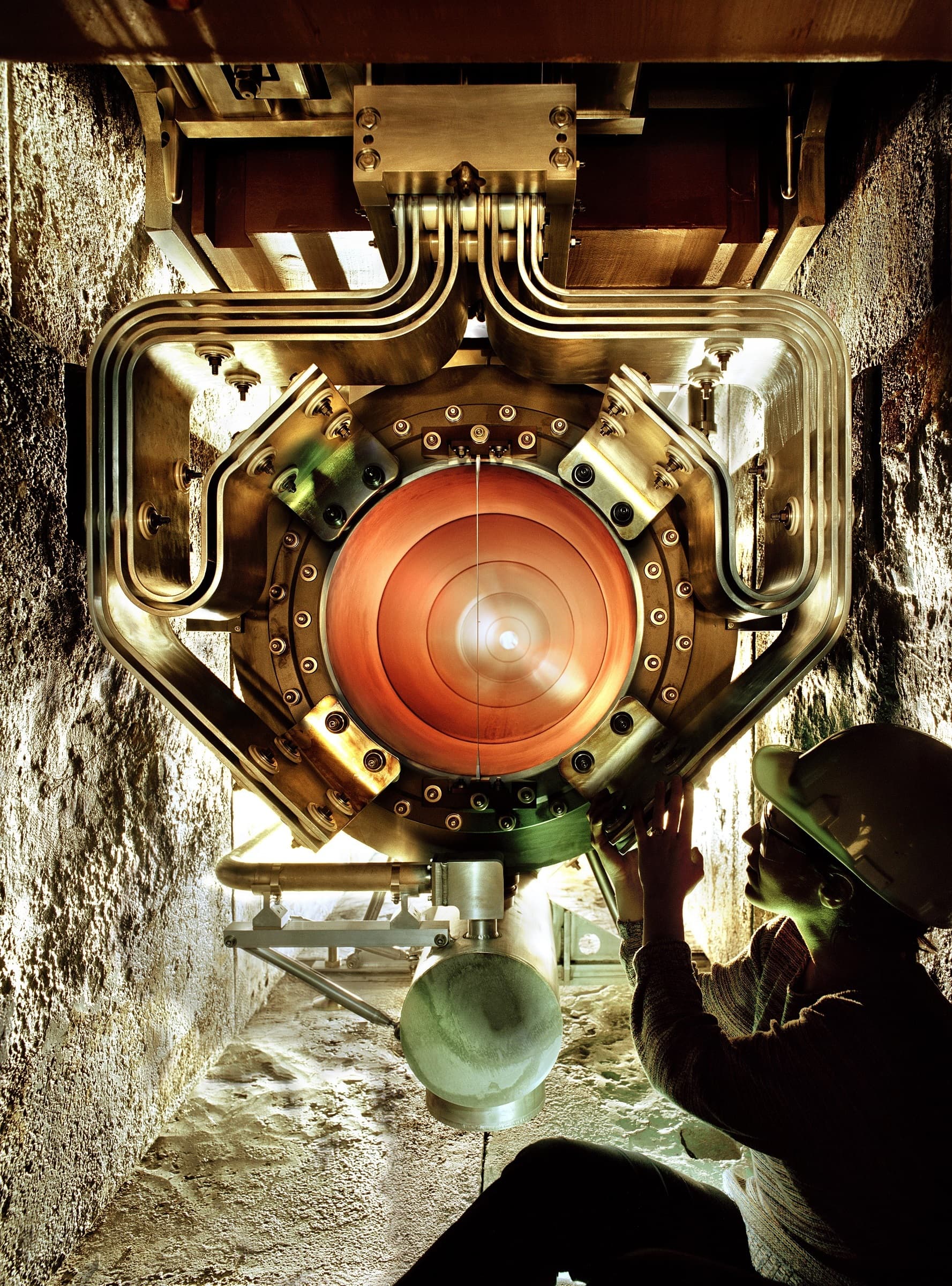 Neutrinos are infinitesimally small and nearly massless particles that are all around us at any given moment. Roughly one trillion neutrinos from the Sun pass through a human's eyes every second, but since they interact so rarely with anything, observing them is extremely difficult despite their pervasiveness. Now, scientists from the Department of Energy's Lawrence Berkeley National Laboratory (Berkeley Lab) and UC Berkeley have used data collected from the IceCube array in Antarctica to show that the Earth itself can absorb neutrinos.

Their study has been published in the journal Nature.

The IceCube array consists of 5,160 basketball-sized optical sensors buried 1.6 kilometers (1 mile) deep in a cubic kilometer (.23 cubic miles) of exceptionally clear ice near the South Pole. The array is buried deep in the Antarctic so that the optical sensors don't accidentally pick up radio or cell phone transmissions, which figuratively pollute much of the Earth's surface with unwanted noise.

When hydrogen or heavier nuclei stemming from high-energy cosmic rays from beyond the solar system interact with oxygen nuclei in our planet's atmosphere, the interaction creates a plethora of particles. Some of these particles decay into neutrinos, which rain down onto the Earth's surface from every direction. These neutrinos can be indirectly detected as they pass through the Earth and "light up" the IceCube detectors on their way back into outer space.

Using the data from these detectors, the researchers were able to conclude that fewer energetic neutrinos made it to the detectors from directions more obstructed by the Earth's mass than from less obstructed angles. That meant the Earth itself could absorb neutrinos in a way that was measurable.

"Absorption of neutrinos have been seen, but never measured before," Sandy Miarecki, an assistant professor of physics at the U.S. Air Force Academy in Colorado who conducted much of the data analysis for the study, told Futurism. "We measured neutrinos via cross section with energies beyond what can currently be found with an accelerator [like CERN]."

Indeed, this study provided measurements for neutrinos with energies up to 1,000 times higher than those of human-made particle accelerators. The neutrino interactions analyzed have energies in the trillion-electron-volt, or TeV, range. A mosquito puts out about one TeV. The detected neutrinos' energy ranged from 6.3 TeV to 980 TeV.

As Miarecki noted in a news release, this study of the Earth's ability to absorb neutrinos was multidisciplinary. In order to understand if the cross section of neutrinos detected matched Standard Model predictions, the analysts used input from geologists who supplied models of the Earth's interior from seismic studies. With this, they were able to compare their data with a simulation of neutrinos passing through the Earth.

"We created some of the data from seismic data bouncing off of various parts of the Earth," Miarecki told Futurism. "Put together all the constraints, including the gravitational constriction of the Earth, and you have a good model."

While this study was enough to confirm Standard Model simulations of the Earth interacting with high-energy neutrinos, the team is anxious to take their research further.

"The problem when searching for higher-energy neutrinos is that you need something strong enough to accelerate these things to the incredible speed they're going, for example, supermassive black holes or colliding quasars," Miarecki said. "The traditional supernova can't explain the super-high energies we see in these particles."

Although no evidence was found to suggest the existence of exotic particles that would confirm a realm of quantum physics beyond the Standard Model, this study has opened up new possibilities for the nascent science of neutrino astronomy — the study of neutrinos born of extra-solar phenomena like merging black holes or supermassive black holes.

"IceCube was initially built to try enough exotic particles to form a new model, but it's a puzzle because we've not yet seen enough in a consistent position," Miarecki said. "One day we see an exotic [ultra-high energy neutrino] particle over there, the next day over here — so we're looking for an originating phenomenon in space that provides an 'a-ha,' a cause for the pattern we see." But so far, no luck.

Miarecki noted that the team's limited allotted time with the supercomputers needed for their research of how the Earth could absorb neutrinos was a factor, as well.

"We're limited by the amount of computer time available in order to carry out our simulations," she said. "We make every use we can while we have the time because of the many different needs for computer time.

That could change relatively soon, though.

"I believe quantum computing would speed up calculations considerably — any speed increase in computational speed would allow us to have more simulations, because more calculations means less uncertainty in what we expect from the model we compare our real-world findings with," said Miarecki.

While the findings of this study are remarkable, they may prove to be simply the beginning.

The IceCube-Gen2 is currently awaiting final approval for funding from the National Science Foundation, according to Miarecki. That array would have a superior energy range that researchers could use to gather even more data on how the Earth can absorb neutrinos. Additionally, an entirely new form of detection based on radio waves could prove even more effective than IceCube's optical system.

"We could use metal antennae buried in the thin ice on top of the last ice shelf to look for radio waves bouncing or reflecting between ice and water layers and then back up to antennae," said Miarecki. "Then we could triangulate the direction and speed of neutrino interaction. The amount of radio-waves detected would tell you what kind of neutrinos are detected."

It's truly an exciting time for astrophysics and astronomy. Nearly every new discovery has implications across a multitude of disciplines, and together, they are pushing us toward a fundamental breakthrough in our understanding of the physical universe.

Read This Next
Turn Back Time
Scientists Say There May Be a Mirror Universe in Which Time Runs Backwards
I Must Axion A Question
Physicists Say They've Found Evidence of Elusive Axion Particle
Atom Smash!
Vast New Particle Accelerator Would Dwarf Large Hadron Collider
Nap Time
The Large Hadron Collider Just Shut Down
Futurism
CERN Researchers Are Planning to Trap and Truck Antimatter From One Facility to Another
More on Hard Science
Tractor Beam
Jan 26 on the byte
Scientists Build Working Tractor Beam, Although It's Comically Tiny
Having a Blast
Jan 18 on the byte
New Study Shows Where You Should Hide to Survive a Nuclear Attack
Offworld Amino
Jan 15 on the byte
Scientists Find Building Blocks of Life in Meteor That Smashed Into Family's Driveway
READ MORE STORIES ABOUT / Hard Science
Keep up.
Subscribe to our daily newsletter to keep in touch with the subjects shaping our future.
+Social+Newsletter
TopicsAbout UsContact Us
Copyright ©, Camden Media Inc All Rights Reserved. See our User Agreement, Privacy Policy and Data Use Policy. The material on this site may not be reproduced, distributed, transmitted, cached or otherwise used, except with prior written permission of Futurism. Articles may contain affiliate links which enable us to share in the revenue of any purchases made.
Fonts by Typekit and Monotype.