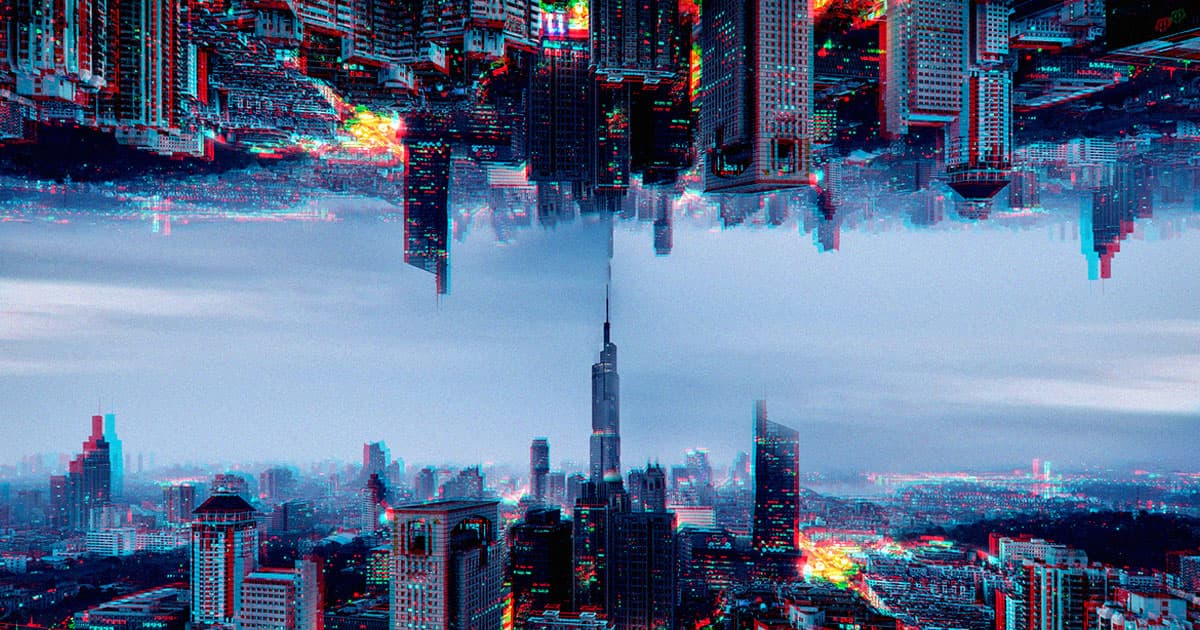 Think Daylight Savings Time is bad? At least you don't live in what scientists are calling the "anti-universe," a hypothetical mirror to the one we know and loathe — where time runs freakin' backwards, starting at the Big Bang.

As Live Science reports, a recently published paper by an international team of theoretical physicists is lending credibility to the concept of such an "anti-universe" — a theory which could also help explain the existence of dark matter, a mysterious yet abundant substance filling our universe.

The theory behind the study, set to be published in the journal Annals of Physics, relies on what physicists call the three fundamental symmetries in nature. In the Standard Model of Particle Physics, they are: charge, because flipping the charge of a particle in a given interaction results in an equal and opposite charge; parity, because the mirror image of a particle interaction will look the same as the original; and time, because interactions that run backwards in time look the same as their original.

These three fundamental symmetries, the scientists say, suggest the existence of a mirror universe that would be the exact opposite of ours, meaning it would be filled with oppositely charged and mirrored particles that are going backwards in time.

The theory could also shed light on the ambiguity of dark matter — which is said to make up 95 percent of our Universe, yet is completely invisible to us.

In this anti-universe, dark matter would be primarily made up of a new kind of neutrino, the extremely high-energy and low-density subatomic particles that carry neither a positive nor negative charge.

As Live Science notes, there are three known types of neutrinos that are all left-handed, meaning they spin to the left, while all other known particles have both left- and right-handed variations.

That could mean there are right-handed neutrinos somewhere out there that we can't detect, as scientists have suggested in the past.

These right-handed neutrinos, the researchers add, would likely be invisible but would nonetheless influence the rest of the universe when interacting with gravity.

That's essentially how we understand dark matter as well, the physicists argue, which we cannot see but are aware of because it, too, only interacts with the rest of the universe via gravity.

If symmetry exists everywhere else, the paper explains, it would necessitate right-handed neutrinos in as great an abundance as their left-handed counterparts — which would in turn be enough to account for dark matter.

We're a long way from figuring out what dark matter is. But when we do, it may be as shocking as the discovery of a flipped universe that runs backwards in time.

READ MORE: Our universe may have a twin that runs backward in time [Live Science]

More on dark matter: Inside NASA’s Bold Proposal to Probe the Mysteries of Dark Matter

Read This Next
Dark Secrets
Scientists Just Detected the Oldest Dark Matter Ever Observed
Walled Up
Scientists Say Space Is Filled With Invisible Walls
Into Darkness
Inside NASA's Bold Proposal to Probe the Mysteries of Dark Matter
Was Al Wrong?
New Evidence About the Universe Suggests Einstein Was Wrong
Big Sky
Scientists Say New Experiment Will Determine "Fate of the Universe"
More on Hard Science
Warped Tour
Thursday on futurism
Professor Believes Door to Warp Drive May Lie With Ethylene Glycol
Sky Bursts
Thursday on the byte
Astronomers Intrigued by 25 Mysterious Repeating Radio Signals From Deep Space
Tractor Beam
Jan 26 on the byte
Scientists Build Working Tractor Beam, Although It's Comically Tiny
READ MORE STORIES ABOUT / Hard Science
Keep up.
Subscribe to our daily newsletter to keep in touch with the subjects shaping our future.
+Social+Newsletter
TopicsAbout UsContact Us
Copyright ©, Camden Media Inc All Rights Reserved. See our User Agreement, Privacy Policy and Data Use Policy. The material on this site may not be reproduced, distributed, transmitted, cached or otherwise used, except with prior written permission of Futurism. Articles may contain affiliate links which enable us to share in the revenue of any purchases made.
Fonts by Typekit and Monotype.