It's just an upgrade, not something coming through the portal. 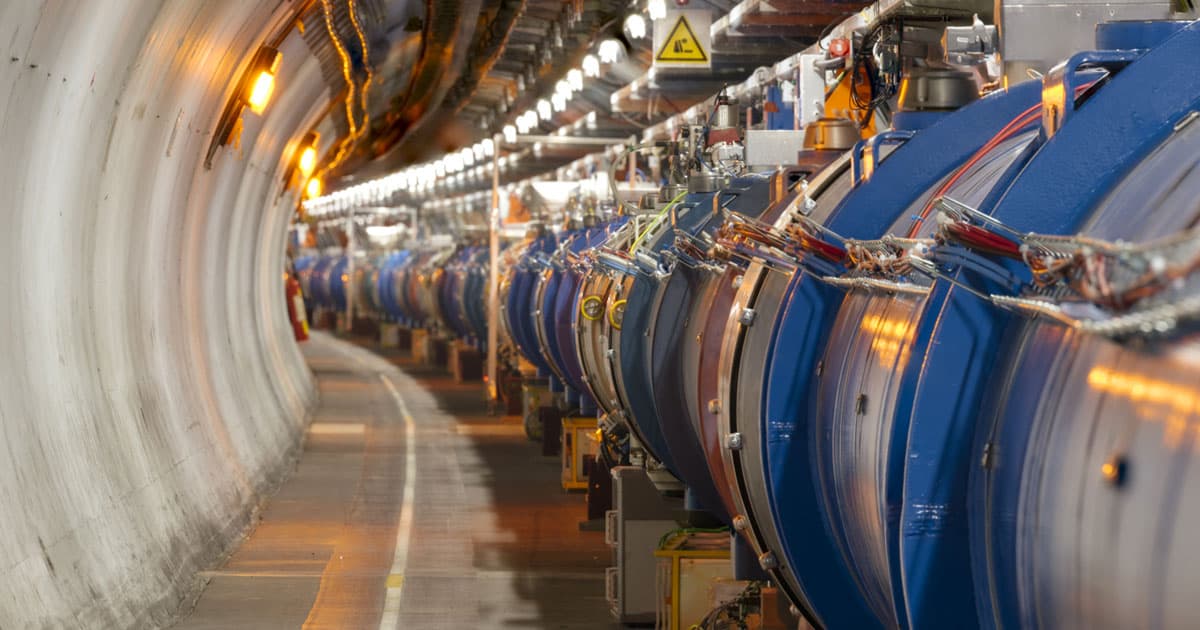 The Large Hadron Collider (LHC), the particle accelerator famous for producing evidence of the elusive Higgs Boson, is taking a well-deserved break — all experimentation temporarily shut down on Monday. But unlike the time the LHC shut down in 2016 after a weasel chewed through some wires, this pause in operations was deliberate.

Scientists at the European Organization for Nuclear Research, better known as CERN, will spend the next two years performing routine maintenance and upgrading the LHC's capabilities. If all goes according to plan, they'll switch it back on in early 2021, according to a CERN press release.

The next run of experiments will involve collisions at higher energy levels than ever before, which CERN scientists hope will yield more and higher quality data than ever before. To make that possible, scientists will replace the two accelerators in the LHC — which contains two particle accelerators facing each other — with new and improved models that can generate more intense beams of hydrogen ions.

Better accelerators and more intense beams will allow CERN scientists to smash particles together harder than ever before, which they say unlocks new experiments that are currently beyond the LHC's capacity.

While the LHC's operators won't conduct any new experiments for over two years, there's a good chance that we'll hear about new discoveries in particle physics in that time. Right now, CERN is sitting on a massive backlog of LHC data. The recently-completed run of experiments, which began back in 2015, yielded 300 petabytes of data, which CERN compared to a millennium of nonstop video footage.

While some CERN scientists will be preparing the LHC for the future of particle physics experimentation, others will spend that time poring through the existing data, looking for any findings that they may have missed — stay tuned.

READ MORE: The Large Hadron Collider is shutting down for 2 years [Science News]

More on the Large Hadron Collider: An Acceleration Breakthrough Could Fundamentally Change how we Study Particles

Read This Next
Quacks Like a Duck
Those Headlines About Scientists Building a Wormhole Are Total Nonsense, People
Good Samaritan
Physics Dept Gets Random Box Full of $180K in Untraceable $50s and $100s
Primordial Tap Water
The Early Universe Was a Vast Liquid Ocean, Scientists Say
Brands We Love
Go Beyond The Science Headlines With The Fundamentals Of Physics Course
Quantum Teleportation
Scientists Are Building a Quantum Teleporter Based on Black Holes
More on Hard Science
Warped Tour
Feb 2 on futurism
Professor Believes Door to Warp Drive May Lie With Ethylene Glycol
Sky Bursts
Feb 2 on the byte
Astronomers Intrigued by 25 Mysterious Repeating Radio Signals From Deep Space
Tractor Beam
Jan 26 on the byte
Scientists Build Working Tractor Beam, Although It's Comically Tiny
READ MORE STORIES ABOUT / Hard Science
Keep up.
Subscribe to our daily newsletter to keep in touch with the subjects shaping our future.
+Social+Newsletter
TopicsAbout UsContact Us
Copyright ©, Camden Media Inc All Rights Reserved. See our User Agreement, Privacy Policy and Data Use Policy. The material on this site may not be reproduced, distributed, transmitted, cached or otherwise used, except with prior written permission of Futurism. Articles may contain affiliate links which enable us to share in the revenue of any purchases made.
Fonts by Typekit and Monotype.