Those Headlines About Scientists Building a Wormhole Are Total Nonsense, People 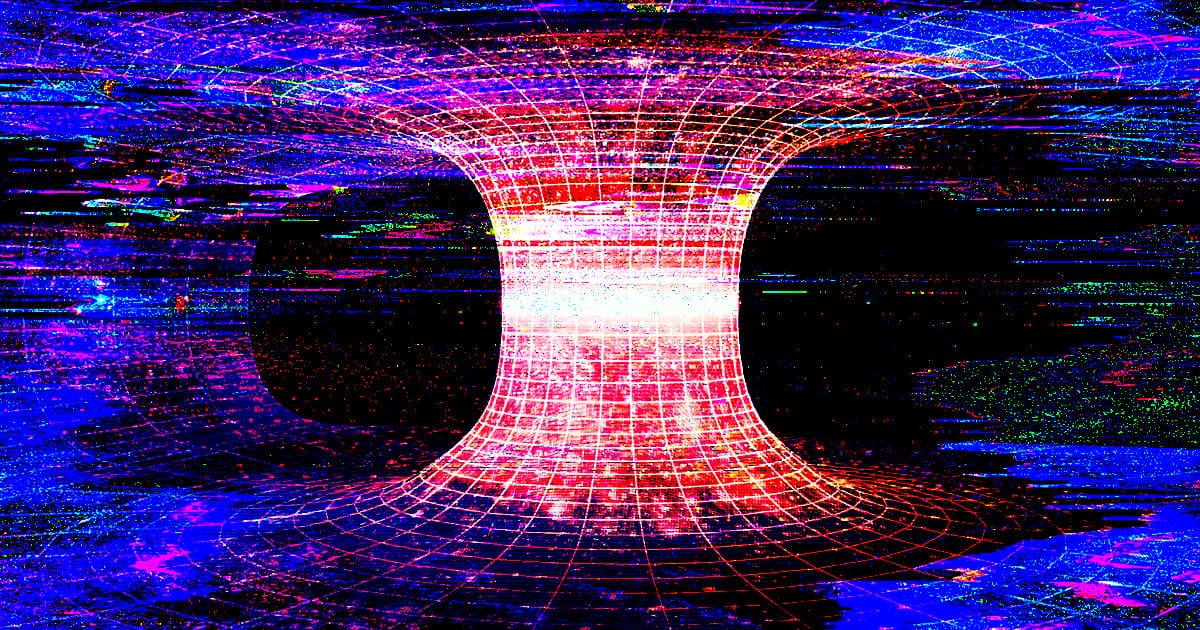 Some fun but esoteric physics news broke this week: that researchers had simulated two black holes using a quantum computer, and managed to send a message between them, as if the virtual system was a tiny wormhole.

The research, as detailed in a new paper published in the journal Nature on Wednesday, was picked up by major new outlets — but in a serious failing of science literacy, they jumped to some outrageous conclusions in their headlines.

In reality, those headlines couldn't be further from the truth. The researchers weren't actually able to create a wormhole of any kind — or at least one that exists in the real world, "baby" or not. Suggesting otherwise is like claiming that playing the videogame "Portal" involves creating an actual wormhole because it depicts something akin to the theoretical concept onscreen.

Worse yet, experts were quick to point out that headlines like these only serve to warp the truth and mislead the public. After all, many people see the headline and move on without reading further.

"No, they didn't create a wormhole," German physicist and science writer Sabine Hossenfelder argued, responding to a tweet by Quanta Magazine claiming that physicists had "built a wormhole and successfully sent information from one end to the other."

"It's a bullshit headline that deliberately misinforms the reader and I think you should unfollow and unsubscribe from every outlet that promotes this nonsense," she added.

The researchers themselves were careful not to jump to conclusions in what they were able to achieve in their research — quotes that were published right below those misleading headlines.

"There's a difference between something being possible in principle and possible in reality," physicist and study co-author Joseph Lykken of Fermilab, told Reuters. "So don't hold your breath about sending your dog through the wormhole. But you have to start somewhere."

"We are just using the quantum computer to find out what it would look and feel like if you were in this gravitational situation," Daniel Jafferis, a physics professor at Harvard and lead author of the new research, told The New York Times.

Hossenfelder, however, was left unimpressed by their work.

"This 'wormhole' talk is a fancy word for a piece of math," she argued. "Using the same mathematics, anything at constant temperature is a 'black hole.' Pouring water into your sink? Yeah, that's a black hole, congrats."

Other experts would tend to agree.

"The most important thing I’d want New York Times readers to understand is this," quantum computing expert Scott Aaronson, who was not involved in the research, told the newspaper. "If this experiment has brought a wormhole into actual physical existence, then a strong case could be made that you, too, bring a wormhole into actual physical existence every time you sketch one with pen and paper."

More on wormholes: Objects We Thought Were Black Holes May Actually Be Wormholes, Scientists Say

Read This Next
Falling In
Objects We Thought Were Black Holes May Actually Be Wormholes, Scientists Say
Good Samaritan
Physics Dept Gets Random Box Full of $180K in Untraceable $50s and $100s
Wooosh
Physicists Propose New Idea for "Human-Safe" Wormholes
Confirmation Bias
Microsoft Retracts Paper Claiming Quantum Computing Breakthrough
Beam Me Up Qubit
Researchers Achieve First "Sustained" Long Distance Quantum Teleportation
More on Hard Science
Tractor Beam
Jan 26 on the byte
Scientists Build Working Tractor Beam, Although It's Comically Tiny
Having a Blast
Jan 18 on the byte
New Study Shows Where You Should Hide to Survive a Nuclear Attack
Offworld Amino
Jan 15 on the byte
Scientists Find Building Blocks of Life in Meteor That Smashed Into Family's Driveway
READ MORE STORIES ABOUT / Hard Science
Keep up.
Subscribe to our daily newsletter to keep in touch with the subjects shaping our future.
+Social+Newsletter
TopicsAbout UsContact Us
Copyright ©, Camden Media Inc All Rights Reserved. See our User Agreement, Privacy Policy and Data Use Policy. The material on this site may not be reproduced, distributed, transmitted, cached or otherwise used, except with prior written permission of Futurism. Articles may contain affiliate links which enable us to share in the revenue of any purchases made.
Fonts by Typekit and Monotype.