The Early Universe Was a Vast Liquid Ocean, Scientists Say

The primordial goo created by the Big Bang may have flowed like water. 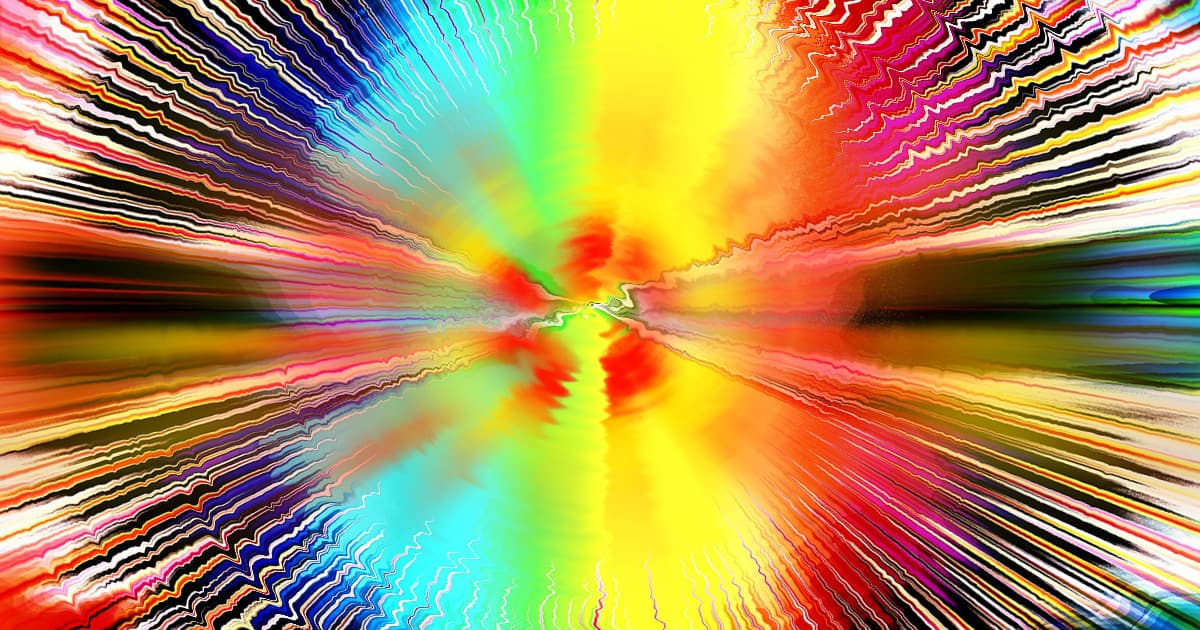 Physicists used the world's largest atom accelerator, the Large Hadron Collider (LHC) in Switzerland, to smash lead particles together at just shy of the speed of light in a bid to recreate the first matter created by the creation of the universe.

This primordial goo, called "quark-gluon plasma" (QGP), only appeared for a tiny fraction of a second — 10 to the minus 23 seconds, to be precise — but the scientists managed to get an unprecedented look.

What they found was surprising: the viscosity of the primordial fluid turned out to be astonishingly close to water, leading the researchers to conclude that elementary particles formed fractions of a second after the Big Bang may have flowed like water, as detailed in a new study published in the journal SciPost Physics last week.

The results could redefine the way we understand the period of time after the Big Bang.

Just microseconds after the beginning of the universe, according to the new research, extremely hot QGP cooled quickly to form the elements that now fill the known universe.

We've been able to recreate QPG since the early 2000s, but only now have been able to observe how it behaves, according to a statement by the researchers.

QGP's viscosity and density are both technically 16 orders of magnitude larger than in water, but the ratio between the two are essentially the same, according to the study. That means the two fluids will flow in the same way despite their significant differences.

"We do not fully understand the origin of this striking similarity yet but we think it could be related to the fundamental physical constants which set both the universal lower limit of viscosity for both ordinary liquids and quark-gluon plasma," Kostya Trachenko, a physics professor at Queen Mary University of London and author of the recent paper, said in the statement.

The results could change the way we understand the primordial goo that was created by the Big Bang.

"It is conceivable that the current result can provide us with a better understanding of the quark-gluon plasma," said Vadim Brazhkin, professor at the Russian Academy of Sciences, who was not involved in the research, in the statement.

"The reason is that viscosity in liquids at their minimum corresponds to a very particular regime of liquid dynamics which we understood only recently," he added. "The similarity with the QGP suggests that particles in this exotic system move in the same way as in tap water."

Next, scientists are hoping to turn back the clock even further using particle accelerators like the LHC to get an even earlier look at the development of the universe.

READ MORE: Our Universe's Earliest State of Matter Was Like an Ocean of Perfect Liquid [Science Alert]

More on the Big Bang: Scientists Say New Experiment Will Determine “Fate of the Universe”

Read This Next
Bangs and Bounces
Scientists Say Stuff Might Have Been Happening Before the Big Bang
Big Sky
Scientists Say New Experiment Will Determine "Fate of the Universe"
Really Really Really Old
Astronomers Puzzled By Ancient Milky Way-Like Galaxy 12 Billion Light-Years Away
Little Bang
Scientists Accidentally Recreate Big Bang Detonation in the Lab
Absolute Units
These Bizarre Objects May Have "Seeded" Supermassive Black Holes
More on Hard Science
Reel Big Dish
5:33 PM on the byte
Brilliant Scientists Decide to Name the World's Largest Telescope "SKA"
Horrible Geese
Dec 4 on futurism
Furious Geese Are Defeating Humans, Scientists Find
Quacks Like a Duck
Dec 1 on futurism
Those Headlines About Scientists Building a Wormhole Are Total Nonsense, People
READ MORE STORIES ABOUT / Hard Science
Keep up.
Subscribe to our daily newsletter to keep in touch with the subjects shaping our future.
+Social+Newsletter
TopicsAbout UsContact Us
Copyright ©, Camden Media Inc All Rights Reserved. See our User Agreement, Privacy Policy and Data Use Policy. The material on this site may not be reproduced, distributed, transmitted, cached or otherwise used, except with prior written permission of Futurism. Articles may contain affiliate links which enable us to share in the revenue of any purchases made.
Fonts by Typekit and Monotype.