These Bizarre Objects May Have "Seeded" Supermassive Black Holes 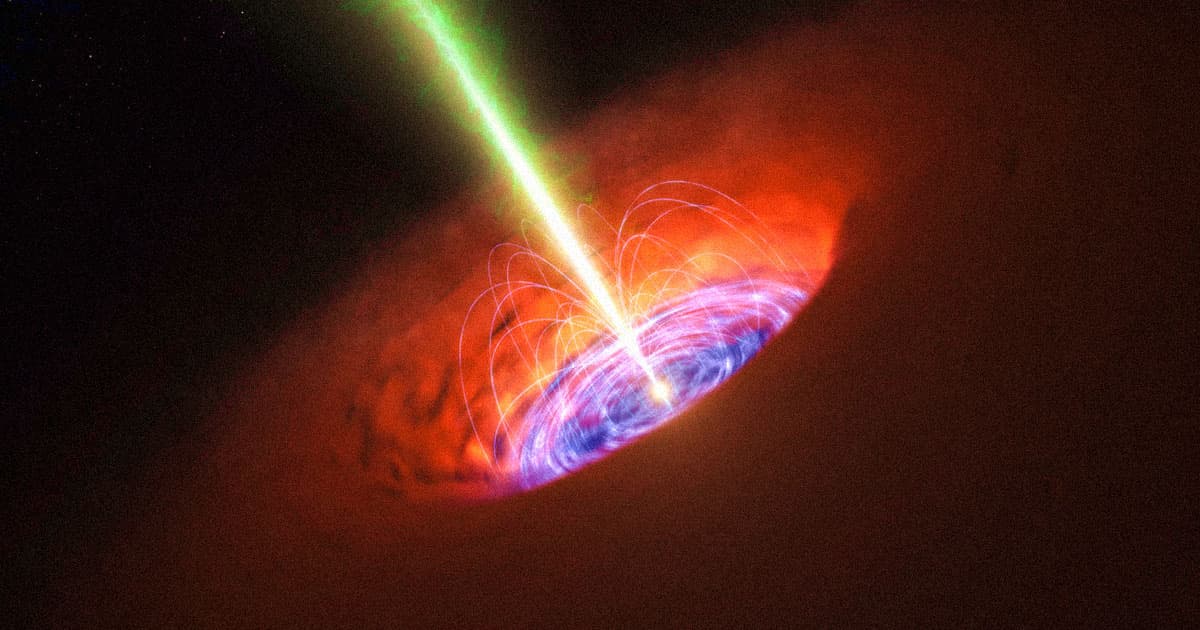 Astronomers have a new theory about the formation of supermassive black holes.

Extremely bright objects that first appeared close to the birth of the universe — theoretical objects called "dark stars" — could have seeded supermassive black holes over millions of years, according to a new Astronomy story about University of Michigan physicist Katherine Freese.

Dark stars wouldn't have been much like the stars we're used to: rather than balancing out gravitational forces with heat dissipated by nuclear fusion reactions, dark stars would have been far less dense, mostly made up of hydrogen and helium. That means they could have swelled up to outrageous sizes compared to today's stars.

The energy that stopped them from collapsing in on themselves is thought to have come from dark matter particles — which have still never been observed directly — that annihilate each other, releasing energy in the process.

"They can keep growing as long as there is dark matter fuel," Freese told Astronomy. "We've assumed they can get up to 10 million times the mass of the Sun and 10 billion times as bright as the Sun, but we don't really know. There is no cutoff in principle."

In 2016, for instance, the Atacama Large Millimeter Array in northern Chile spotted a supermassive black hole that was 660 million times as massive as the Sun.

Dark stars would have been anything but "dark." In fact, they are thought to have been much brighter than the Sun.

So why haven't astronomers spotted a dark star yet? Astrophysicists' best guess is that they existed in the era after the Big Bang — and we have yet to find a way to glimpse such ancient stellar history.

But luckily, scientists at NASA are building a telescope sensitive enough to one day spot dark stars — the James Webb Space Telescope (JWST).

In a 2012 study, scientists from the Royal Astronomical Society at Oxford University proposed using the telescope to detect supermassive dark stars from the early stages of the universe. Astronomers at NASA also believe that the JWST could allow us to catch glimpses of the early cosmos.

"Looking for the first stars and black holes has long been a goal of astronomy," said Rogier Windhorst of Arizona State University, Tempe in a 2018 NASA statement.

And Reese is hopeful as well.

"If a dark star of a million solar masses were found [by James Webb] from very early on, it's pretty clear that such an object would end up as a big black hole," Freese told Astronomy. "Then these could merge together to make supermassive black holes. A very reasonable scenario!"

While astronomers have been excited to start studying data from the JWST, the project has unfortunately been in development hell for over two decades. In June 2018, the project was rescheduled for March 2021.

But if the JWST does ever make its way into space, it could provide tantalizing new data on dark stars and supermassive black holes — and we'd also be one step closer to understanding the early days of the universe.

Read This Next
Falling In
Objects We Thought Were Black Holes May Actually Be Wormholes, Scientists Say
Bangs and Bounces
Scientists Say Stuff Might Have Been Happening Before the Big Bang
Dark Secrets
Scientists Just Detected the Oldest Dark Matter Ever Observed
Walled Up
Scientists Say Space Is Filled With Invisible Walls
Black Hole Snapshot
Scientists Release Image of Black Hole at Center of Our Galaxy
More on Hard Science
Warped Tour
Thursday on futurism
Professor Believes Door to Warp Drive May Lie With Ethylene Glycol
Sky Bursts
Thursday on the byte
Astronomers Intrigued by 25 Mysterious Repeating Radio Signals From Deep Space
Tractor Beam
Jan 26 on the byte
Scientists Build Working Tractor Beam, Although It's Comically Tiny
READ MORE STORIES ABOUT / Hard Science
Keep up.
Subscribe to our daily newsletter to keep in touch with the subjects shaping our future.
+Social+Newsletter
TopicsAbout UsContact Us
Copyright ©, Camden Media Inc All Rights Reserved. See our User Agreement, Privacy Policy and Data Use Policy. The material on this site may not be reproduced, distributed, transmitted, cached or otherwise used, except with prior written permission of Futurism. Articles may contain affiliate links which enable us to share in the revenue of any purchases made.
Fonts by Typekit and Monotype.