The new technique gives astronomers the most accurate dark matter measurements to date. 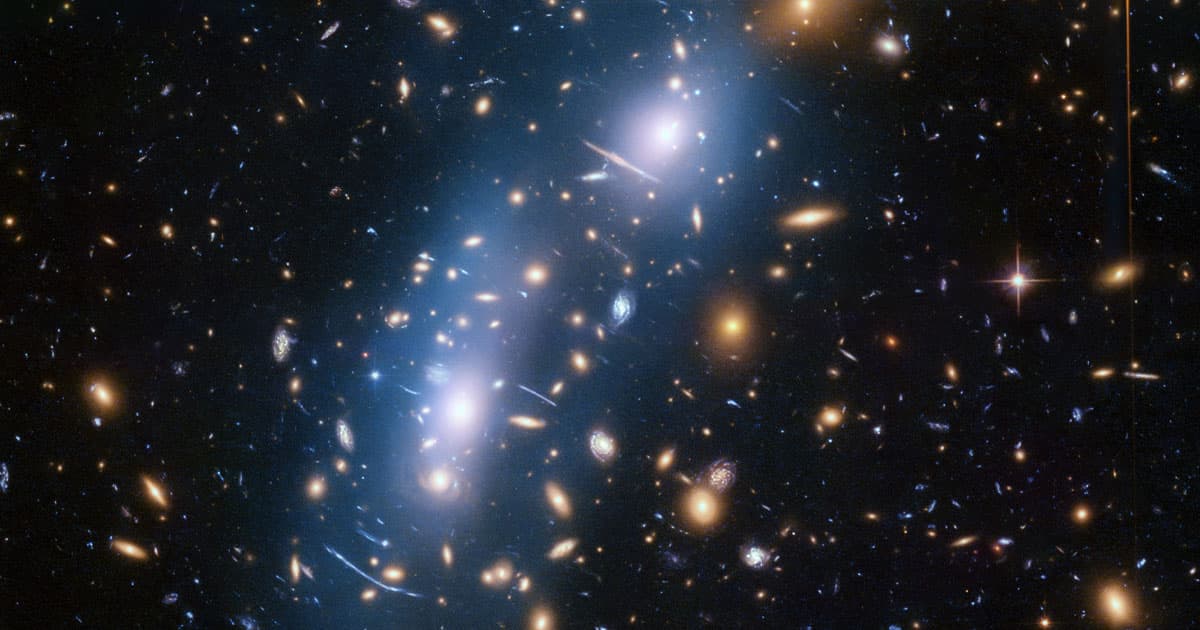 For decades, astronomers have been trying to spot dark matter, an invisible substance that makes up about 85 percent of the matter in the universe and lends much of the gravitational force holding galaxies together. Figuring out how to find and study dark matter would give scientists a better understanding of how the universe formed and how it works today.

But in spite of its prevalence, much of what we know about dark matter comes from indirect measurements, collected by expensive equipment, that require serious mathematical gymnastics to interpret. Scientists use gravitational lensing, for example, to track dark matter by looking at the gravitational pull it exerts on nearby stars or planets.

Now, new research suggests there's a simpler and cheaper way to measure dark matter. The new astronomical trick tracks the light given off by stars that have been ripped from their home galaxies — and NASA scientists say it gives them more accurate readings on the distribution of dark matter than ever before.

It turns out that scientists can get precise measurements on dark matter distribution by recording something called intracluster light, according to NASA research published to the preprint server ArXiv in October, that looked at intracluster light in images taken by the Hubble Telescope.

Intracluster light is the light given off by stars that are flung away when galaxies merge or travel near another. Rather than orbiting a galaxy's core, these stars careen through the universe alone. But it turns out that the stars take some dark matter with them.

And it turns out that measurements of intracluster light directly correlate to the amount of dark matter present in the area, according to the research. Studying these stars — which exist in a vacuum with their corresponding pockets of dark matter — is much simpler and more straightforward than analyzing all the dark matter that's clumped together in a galaxy's core.

"We have found a way to 'see' dark matter," University of New South Wales astronomer Mireia Montes, the lead author of the study, said in a press release. "We have found that very faint light in galaxy clusters, the intracluster light, maps how dark matter is distributed."

More on dark matter: This Ancient Galaxy Was Loaded With Dark Matter

Read This Next
Dark Secrets
Scientists Just Detected the Oldest Dark Matter Ever Observed
Walled Up
Scientists Say Space Is Filled With Invisible Walls
Space Lumps
Scientists Say We May Be Extremely Wrong About the Universe
Turn Back Time
Scientists Say There May Be a Mirror Universe in Which Time Runs Backwards
Into Darkness
Inside NASA's Bold Proposal to Probe the Mysteries of Dark Matter
More on Hard Science
Tractor Beam
2:13 PM on the byte
Scientists Build Working Tractor Beam, Although It's Comically Tiny
Having a Blast
Jan 18 on the byte
New Study Shows Where You Should Hide to Survive a Nuclear Attack
Offworld Amino
Jan 15 on the byte
Scientists Find Building Blocks of Life in Meteor That Smashed Into Family's Driveway
READ MORE STORIES ABOUT / Hard Science
Keep up.
Subscribe to our daily newsletter to keep in touch with the subjects shaping our future.
+Social+Newsletter
TopicsAbout UsContact Us
Copyright ©, Camden Media Inc All Rights Reserved. See our User Agreement, Privacy Policy and Data Use Policy. The material on this site may not be reproduced, distributed, transmitted, cached or otherwise used, except with prior written permission of Futurism. Articles may contain affiliate links which enable us to share in the revenue of any purchases made.
Fonts by Typekit and Monotype.