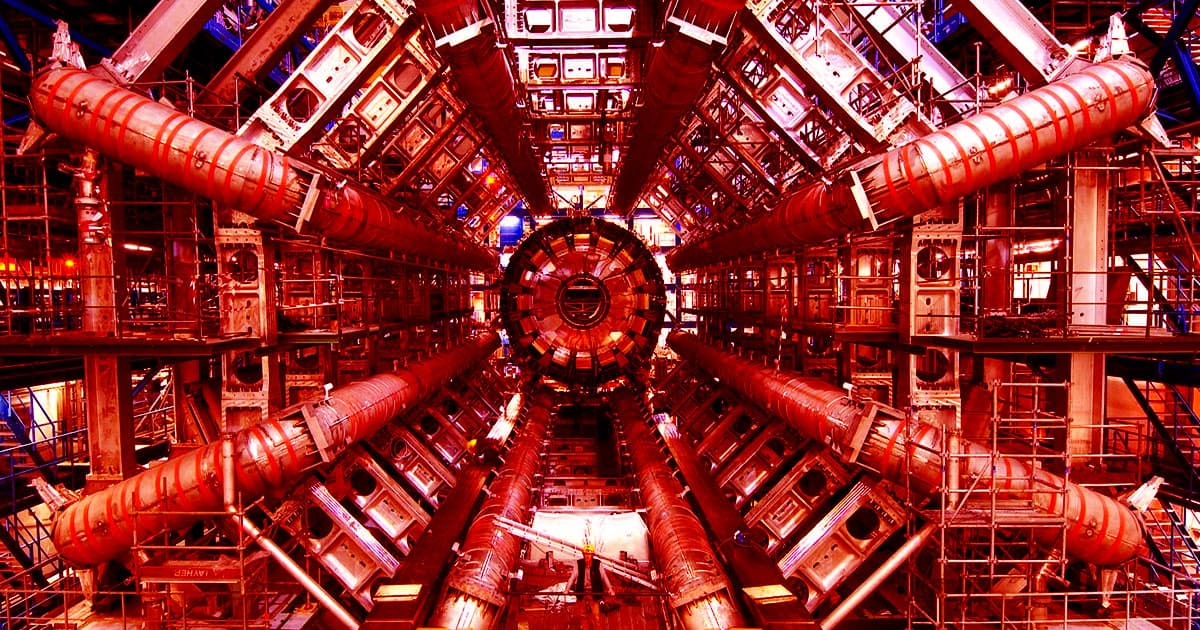 But its potential successor, the Future Circular Collider (FCC), described in a new study by the European Organization for Nuclear Research (CERN), would dwarf it — both physically, with a circumference of 62 miles (100 kilometers), and in terms of raw power, with 10 times the atom-smashing power.

"It shows the community the principles and feasibility of the post-LHC Future Circular Collider," CERN accelerator physicist and study leader Michael Benedikt told Gizmodo. "It shows that there is a credible, coherent physical scenario for implementing a larger-scale project that could seamlessly continue high-energy physics."

FCC Won't Let Me Be

Like the LHC, the new particle accelerator's purpose would be to probe the mysteries of exotic particles like the Higgs boson, which CERN scientists using the LHC first observed in 2012 after physicists had speculated about its existence for decades.

The FCC would use powerful rings of magnets to accelerate matter to mind-boggling speeds, then smash them into each other so that scientists could observe the collision. The goal, according to Gizmodo, would be to study poorly understood phenomena such as dark matter.

Lord of the Rings

Not everybody is on board with the idea of building a huge new particle accelerator.

"We have to draw a line somewhere otherwise we end up with a collider that is so large that it goes around the equator," former U.K. chief scientific advisor David King told the BBC of the plans for the FCC. "And if it doesn't end there perhaps there will be a request for one that goes to the Moon and back."

Read This Next
Nap Time
The Large Hadron Collider Just Shut Down
Futurism
CERN Researchers Are Planning to Trap and Truck Antimatter From One Facility to Another
Futurism
"Holy Grail" Particle: New Physics Research Shows Tetraquarks Must Exist
Futurism
For the First Time, Scientists Have Measured the Earth's Ability to Absorb Neutrinos
Futurism
Physicists Made the Most Precise Measurement of Protons' "Magic Moment"
More on Hard Science
Moved to Tears
Thursday on the byte
Scientists Say New James Webb Images Are So Powerful That It Was Emotional Just Looking at Them
Good God
Tuesday on the byte
Huge Cloud of Toxic Yellow Gas Kills 13
zombie star
Tuesday on futurism
Scientists Puzzled by Star That Exploded in Supernova But Somehow Survived
READ MORE STORIES ABOUT / Hard Science
Keep up.
Subscribe to our daily newsletter to keep in touch with the subjects shaping our future.
+Social+Newsletter
TopicsAbout UsContact Us
Copyright ©, Camden Media Inc All Rights Reserved. See our User Agreement, Privacy Policy and Data Use Policy. The material on this site may not be reproduced, distributed, transmitted, cached or otherwise used, except with prior written permission of Futurism. Fonts by Typekit and Monotype.