FedEx Apologies for Losing Human Skeleton Shipped Via Its Service

Talk about adding insult to injury! 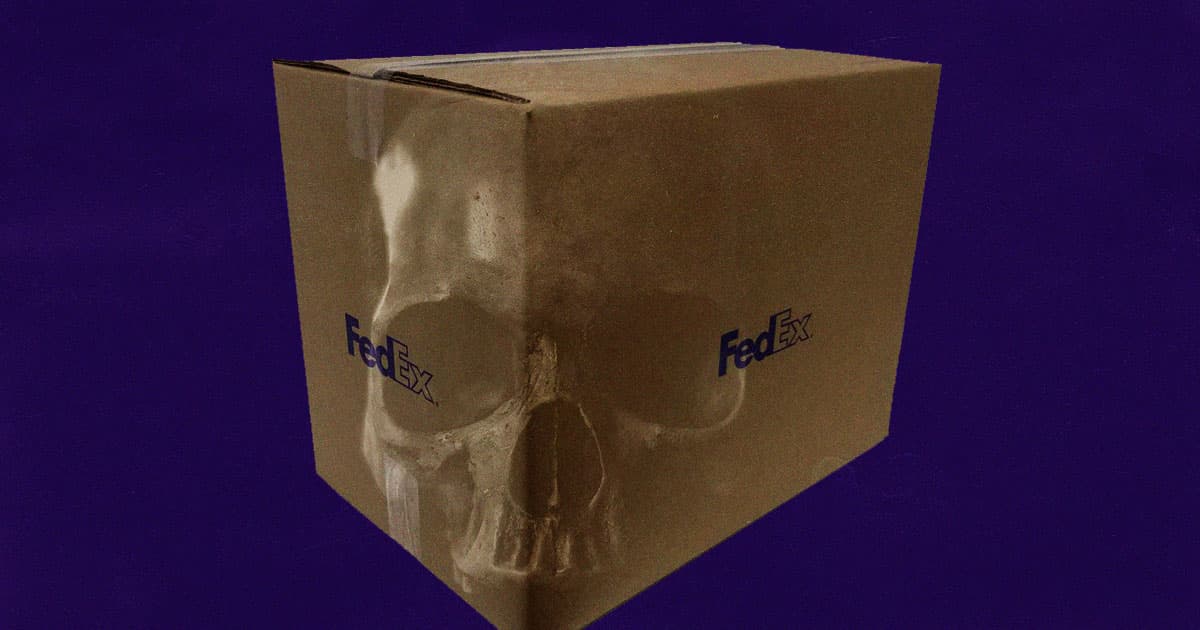 After somehow losing a human skeleton in transit, FedEx used perhaps the milquetoast possible way to apologize for the loss — a generic Twitter reply.

This bizarre story begins three year ago, when per an Atlanta Journal-Constitution investigation a Georgia medical examiner attempted to send the remains of one Jeffrey Merriweather to a lab in St. Louis to try to determine how he went from full-bodied shooting victim to skeleton in the span of two weeks.

The Fulton County Medical Examiner's Office attempted to send a box containing the 18.6-pound skeletal remains via FedEx, but it never arrived. According to Merriweather's mother, the debacle is "a nightmare you can’t wake up from."

The AJC wasn't quite able to figure out what exactly happened to the 32-year-old shooting victim's remains, and the only thing they were able to determine concretely was that a receipt was made out in a Georgia FedEx for $32 to send the roughly 18-pound package to Missouri before it disappeared in transit.

While FedEx did give a response to the Atlanta newspaper offering "thoughts and concerns" about the remains and a statement about why its service should not be used for human remains, it's unclear whether or not the company apologized directly to the Merriweather family — who, for their part, blame the medical examiner's office for the loss.

When the AJC tweeted the story out this past week, however, a FedEx employee who clearly monitors the company's feeds for mentions of the issue gave a jarringly stilted response.

"I am truly sorry you went through this experience," read the tweet from @FedExHelp. "Please send a direct message so I can continue assisting you."

Lots and lots of questions remain about this bizarre tale — including, chief of which, why the ME decided to send the skeletal remains via FedEx in the first place, which is reportedly not customary for these sorts of specimen transfers.

But for now, we at least know that whoever monitors FedEx's Twitter feed knows that the company lost a skeleton. And, heck, that's something.

More medical mysteries: Lawyers and Doctors Struggle to Figure Out Who's Actually Dead

Read This Next
Health Revelation
Chris Hemsworth Reveals Grim Genetic Test Results, Will Take Break From Acting
PDA
Elon Musk Is Faving Posts on Twitter That Are Making Our Skin Crawl With Embarrassment
Baited
That "Research" About How Smartphones Are Causing Deformed Human Bodies Is SEO Spam, You Idiots
FROM THE DEPT. OF THINGS TO BUY
Breville Joule Oven Air-Fryer Pro Review: It Made Me Ditch My Oven
FROM THE DEPT. OF THINGS TO BUY
Review: Masterbuilt Gravity Series 800 Outsmokes Every Pricey Pellet Grill
More on Sci-Fi Visions
Cybersecurity Dis...
Nov 13 on the byte
Insurance Company Refuses to Pay Ransom, So Hackers Start Releasing Health Records of Up To 10 Million People
Telescope Takedown
Nov 3 on the byte
Hackers Just Took Down One of the World's Most Advanced Telescopes
Naked and Afraid
Nov 2 on the byte
Scientists Spot "Stripped, Pulsating Core" of Star Caused By Horrific Accident
READ MORE STORIES ABOUT / Sci-Fi Visions
Keep up.
Subscribe to our daily newsletter to keep in touch with the subjects shaping our future.
+Social+Newsletter
TopicsAbout UsContact Us
Copyright ©, Camden Media Inc All Rights Reserved. See our User Agreement, Privacy Policy and Data Use Policy. The material on this site may not be reproduced, distributed, transmitted, cached or otherwise used, except with prior written permission of Futurism. Articles may contain affiliate links which enable us to share in the revenue of any purchases made.
Fonts by Typekit and Monotype.