Soft Robotics Allows Scientists to Reach Out and "Touch" Sealife

Soft robotics could allow robots in the future to grasp specimens from the seabed without harming marine ecosystems in the process. 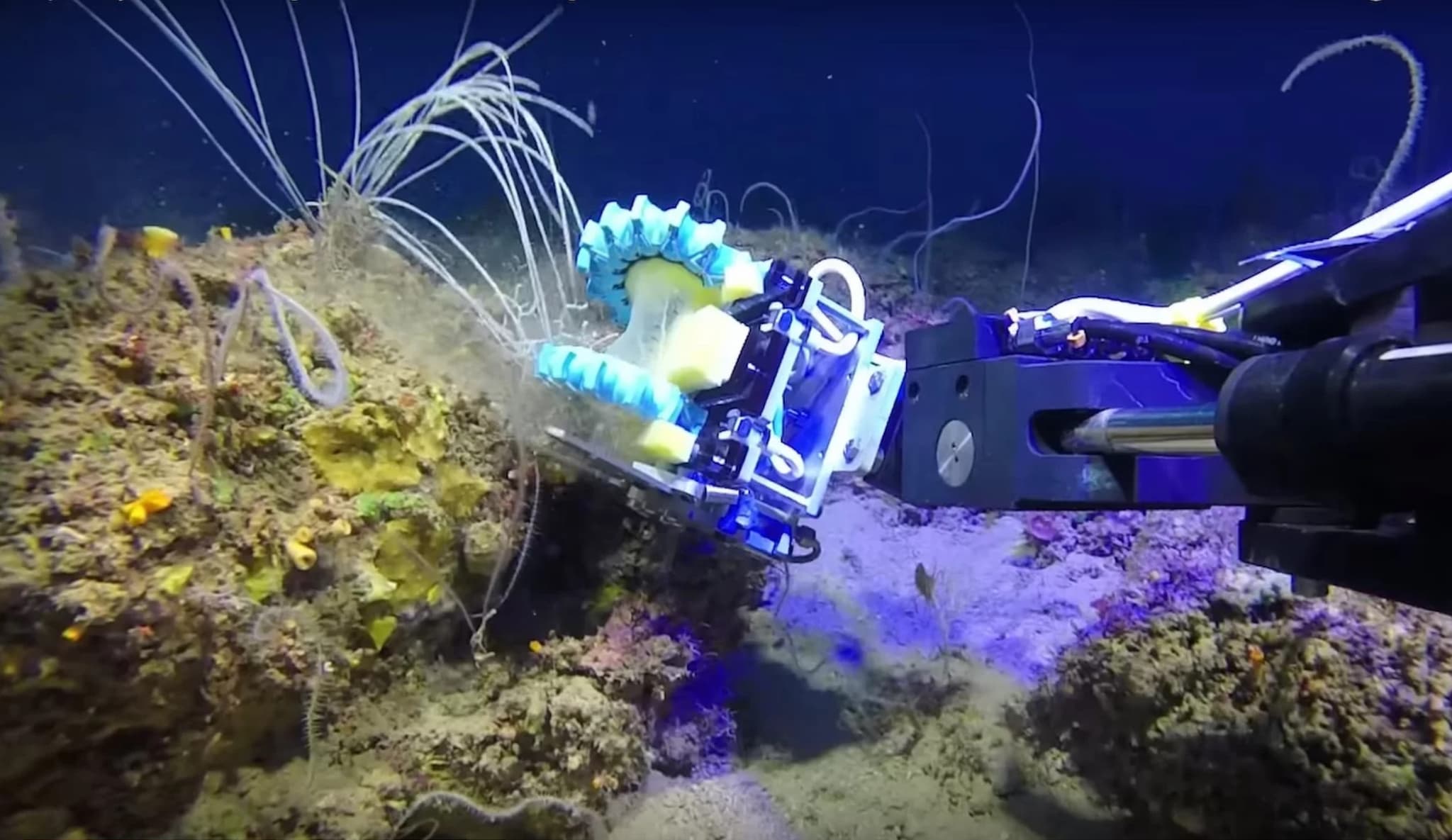 When marine researchers want to visit a coral reef at a depth which human divers can't tolerate, they have to rely on a remotely operated vehicle (ROV)—a robot probe for the deep ocean.

Problem is, most of the standard-issue robotic “hands” on underwater ROVs were designed for undersea construction and pipeline installation, rather than the delicate business of collecting coral, sponge, and other fragile biological samples.

As a result, these clumsy hands often end up destroying and disturbing valuable organisms in the deep-sea marine ecosystem. Manipulating and holding fragile organisms from the sea floor requires the dexterity and soft touch of a human diver's hand, and recreating that in robotic hands poses a real problem.

A new paper published in the journal Soft Robotics may provide a solution. The researchers were able to produce two types of grippers that could be used to handle marine life, and in the process demonstrated a new fabrication technique that allows for the rapid creation of soft actuators. These grippers involve minimal construction and inexpensive materials. They're also modular in design, which allows them to be configured for any situation. This enables users to conduct in-field modification and repair.

“[ROVs use] Jaws of Life-type grippers deigned for the oil and gas industry that were totally overpowered and were destroying things,” Robert Wood, who led the study, describes. “It immediately clicked that there was a soft robotics solution that may be viable.”

The new technology could allow marine researchers to collect samples from largely unexplored habitats thousands of feet beneath the ocean surface. Knowledge gleamed from these areas would prove important in developing our understanding of marine biodiversity. It could also be used in underwater archaeology in handling artifacts that have been weakened by long exposure to water.

A Soft Yet Firm Grasp

The team developed two types of grippers to replace that of the ROV’s factory-furnished metal gripper. One gripper was inspired by the coiling action of a boa constrictor, and its design allows it to gain access to tight spaces and clutch small and irregularly shaped objects. The other is modeled after a bellows, and features opposing pairs of bending actuators. To develop the specifications needed, the researchers tested prototype grippers in a test tank on an assortment of vegetables.

After exhaustive tank tests, the researchers tested their grippers at depths greater than 800 meters (2625 feet) off the Rhode Island coast. They also conducted field testing at Israel’s Gulf of Eilat, in the northern Red Sea, with more than a dozen dives ranging from 100 to 170 meters (558 feet). These dives involved “catch and release” maneuvers which tested system performance.

The researchers hope to develop the technology further to allow in-field measurements of organisms and other complex activities, such as genomic and transcriptomic analysis. This would permit researchers to perform experiments on samples that aren't exposed to stress from changes in temperature, pressure, and light, and would also prevent further damage to the ecosystem.

On the robotics side, they hope to add haptic feedback to allow operators to "feel" what the gripper is touching and improve upon the maximum depth that the grippers can function—on the order of 6,000 meters (over 19,000 feet) or more, in the remotest, and most mysterious, ocean realms.

Their success would go a long way to allowing researchers to improve our understanding of marine ecosystems on the seabed without disturbing them.

Read This Next
Robot Uprising
How Killer Robots Will Know They've Been Blasted With a Shotgun
Futurism
We Now Have Soft Robots With a Sense of Touch. But Why?
Futurism
New Artificial Muscles Lift 1000 Times Their Own Weight
Futurism
Researchers Made a Robotic Hand That Mimics Human Touch
Futurism
Scientists Just Made A Tiny Robotic Caterpillar That's Powered By Light
More on Robots & Machines
FROM THE DEPT. OF...
3:00 PM on futurism
Best Cordless Phones of 2022
FROM THE DEPT. OF...
1:15 PM on futurism
Get Deals on Yeti, Solo, Cuisinart, Samsung, JBL, and Apple Products During These Memorial Day Sales
FROM THE DEPT. OF...
1:00 PM on futurism
Keep Calm and Save Big During These Memorial Day Mattress Sales
READ MORE STORIES ABOUT / Robots & Machines
Keep up.
Subscribe to our daily newsletter to keep in touch with the subjects shaping our future.
+Social+Newsletter
TopicsAbout UsContact Us
Copyright ©, Camden Media Inc All Rights Reserved. See our User Agreement, Privacy Policy and Data Use Policy. The material on this site may not be reproduced, distributed, transmitted, cached or otherwise used, except with prior written permission of Futurism. Fonts by Typekit and Monotype.