We still have no idea what's in the majority of Earth's oceans. 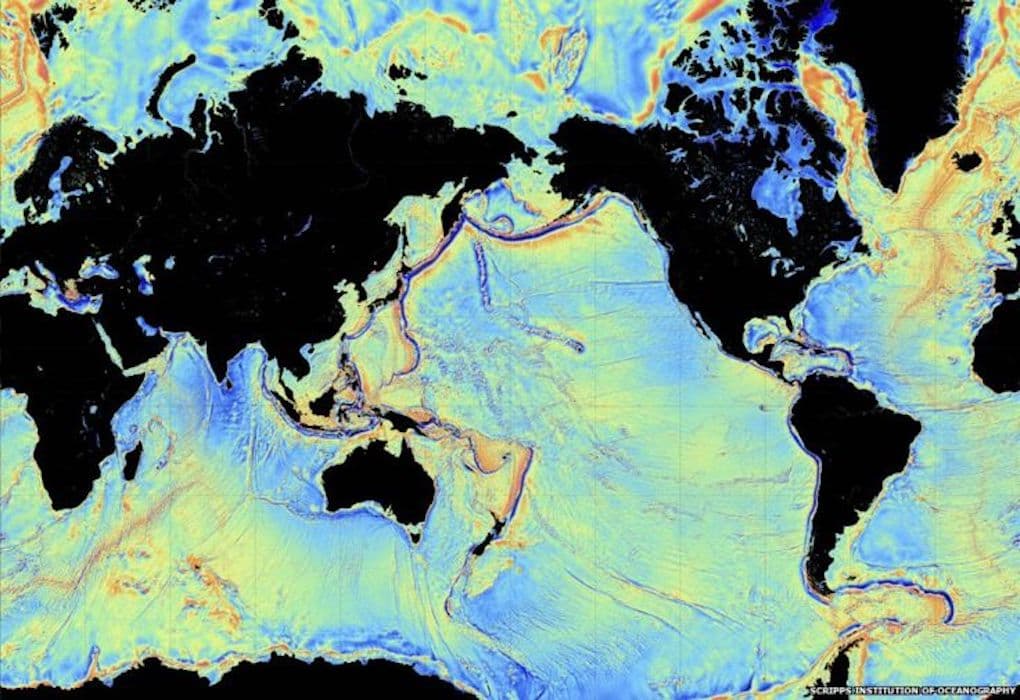 Image by Scripps Institution of Oceanography

If Planet Earth were the back of our hand, we'd disprove the truism about knowing it well pretty quickly. The problem: 71 percent of our planet is covered by ocean, and only about 15 percent of the features under the deep sea have been accurately mapped. These unknowns pose a problem for creating safe navigational charts for boats and underwater vehicles, inhibit scientists from identifying habitats that could host unknown or endangered biodiversity, and even affect our estimates of how the oceans are influencing climate change.

Leaders in science and industry are rallying to remedy this imbalance. In June 2017, Japan's grant-making Nippon Foundation and the General Bathymetric Chart of the Oceans (GEBCO) announced a joint project to map the deep sea, and gave the scientific community a deadline: 100 percent of the ocean floor mapped by 2030.

To that end, Shell is holding the Ocean Discovery XPRIZE, a $7 million competition that challenges participants to create new technologies that allow fast, autonomous, and high-resolution ocean exploration and mapping. Presently, 19 semifinalist teams — hailing from Germany, Ghana, India, Portugal, France, the United States, Canada, the United Kingdom, Switzerland, and Japan — are in the process of Round 1 Testing for their products in the waters of their choice.

Earlier this month, the UK entrants, called Team Tao, demonstrated their entry in Lake Windermere: a group of torpedo-shaped robots called Bathypelagic Excursion Modules, or BEMs, which move together in a grid to rapidly map an area. The team likens them to "cubesats for the ocean."

Several teams in the Shell competition have drawn inspiration from hive minds in nature, modeling small groups of robots after creatures like ants, which work together to accomplish a goal. The French team, Eauligo, plans to utilize hundreds of "marine bees" for mapping, controlled from an autonomous "hive" ship that launches the vehicles and recalls any bees that aren't functioning properly. Germany's team, ARGGONAUTS, plans to utilize multiple pairs of robots that collaborate: one at the surface (the "water strider") and one in the depths (the "great diver").

Send in the Swarm

Such designs mark a departure from previous methods of deep sea mapping, which often relied on bulky and expensive vehicles working solo. Yet as technology becomes ever more miniaturized, these robot "swarms" are likely the future of science and exploration in the ocean — and beyond.

Groups of ocean-exploring robots have been developed by researchers at the University of Lisbon, in Portugal; the Scripps Oceanographic Institution also has their own version made for studying ocean currents.

Collections of nanobots also hold great promise for medicine, where they can be used to deliver drugs from within the body, combat antibiotic-resistant bacteria, and destroy cancerous tumor cells. Ingenious robo-hives have been created to manufacture objects like a cooperative 3D printer and repair broken electronic circuitry. À la Netflix's Black Mirror, swarms of robotic bees might even be recruited to help pollinate flowers amongst an insect extinction crisis.

Even within the field of ocean robotics, these automated swarms could take us well beyond learning more about our own world. With the discovery that multiple planets within our solar system — and likely millions more in the universe — are host to extraterrestrial oceans, these robo-schools could potentially help us learn more about other planets. Given that these oceans are one of the foremost places experts believe we may find alien life, efforts like that of the Nippon Foundation and Shell could end up discovering more about life on multiple worlds.

Read This Next
Diner Drama
People Furious at Robot Serving Pancakes at Denny's
Robot Violence
YouTube Accidentally Removed Robot Battle Videos for "Animal Cruelty"
Buzz Off
Tiny Spies: This Insect-Like Flying Robot is Smaller Than a Penny
Automating Gym Class
Toyota's Basketball Robot Can Nail Three-Pointers
Guardian Exoskeleton
The U.S. Military is Buying a Brutal-Looking Powered Exoskeleton
More on Robots & Machines
From the Dept. of...
12:00 AM on futurism
The Best Wireless Mouse of 2023
Balloon Boy
Yesterday on the byte
Other Chinese Balloons Apparently Flew Over America, But Nobody Noticed Them
From the Dept. of...
Yesterday on futurism
The Best Earbuds Under $50 in 2023
READ MORE STORIES ABOUT / Robots & Machines
Keep up.
Subscribe to our daily newsletter to keep in touch with the subjects shaping our future.
+Social+Newsletter
TopicsAbout UsContact Us
Copyright ©, Camden Media Inc All Rights Reserved. See our User Agreement, Privacy Policy and Data Use Policy. The material on this site may not be reproduced, distributed, transmitted, cached or otherwise used, except with prior written permission of Futurism. Articles may contain affiliate links which enable us to share in the revenue of any purchases made.
Fonts by Typekit and Monotype.