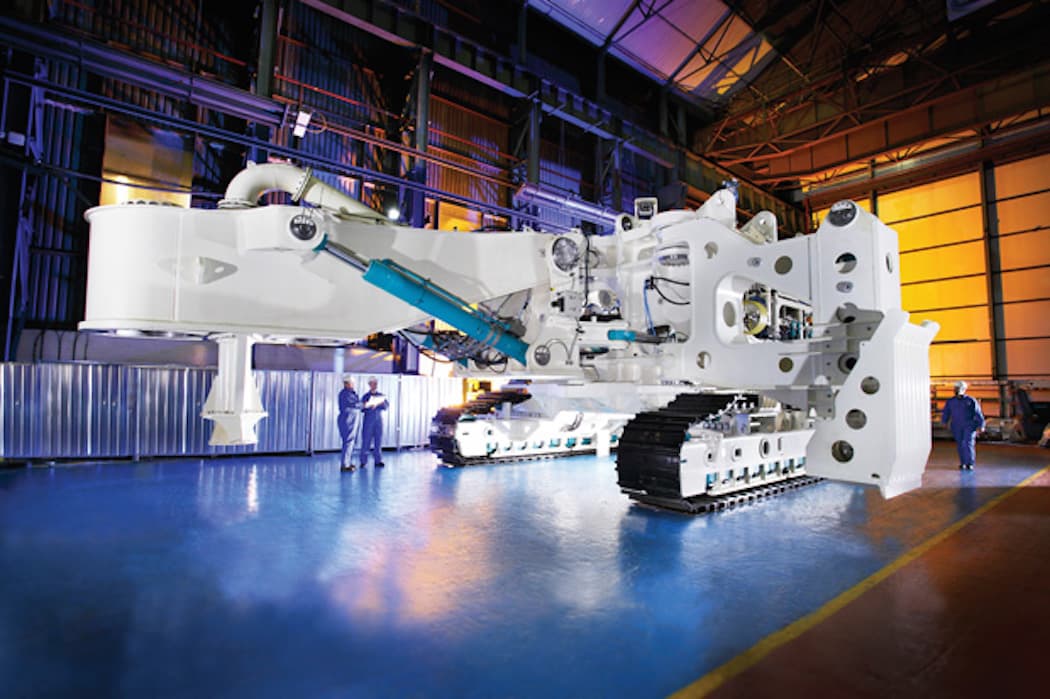 For decades, the mineral wealth that can be found on Earth's ocean floor remained unattainable. Now, the world’s first deep-sea mining robots are set to deploy and mine through the rich deposits of gold, copper, and silver that are found 1600 meters (almost a mile) into the Bismarck Sea (in the vicinity of Papua New Guinea).

The massive machines are a project of Nautilus Minerals, a Toronto based mining company. Originally set to operate as early as 2012, its deployment was put on hold due to a dispute between the Papua New Guinean government and the mining firm. In 2014, Nautilus Minerals offered to provide the country with intellectual property rights for the mining project, which then spurred its operations forward.

The mining robots commissioned by the company were built by Soil Machine Dynamics—a firm known for providing construction equipment for laying undersea cables, servicing offshore oil platforms, and other heavy duty, deep sea jobs. The tractor-sized machines are due to be tested this year ,as the creation of a 227 meter production vessel designed to deploy the mining robots, currently being constructed on a Chinese shipyard, is underway.

“The main robots are a pair of tractor-trailer-size excavators. One uses 4-meter-wide counterrotating heads studded with tungsten carbide picks to chew through the metal-rich chimneys that form around super-hot water spewing from sulfurous vents in the seafloor. Its partner adds brute strength, using a studded drum that is 2.5 meters in diameter and 4 meters wide to pulverize rock walls,” an article regarding the technology explains on IEEE explains. “Dredge pumps built into these machines will push the smashed ore back to a central pile on the seafloor, where a third Nautilus robot will feed a slurry of crushed rock and water up a pipe dangling from the production vessel. There the water will be wrung out from the ore, which will be loaded on another ship and carried to China for processing.”

Towards the end of 2015, Nautilus was undergoing negotiations for shallow-water subsea testing of the machines. The test will involve some rock cutting and, if time permits, undergo a deep sea trial before the mining robots are integrated with the main production vessel.

Should everything go according to plan, the machines are set to spend 30 months in the Solwara 1 site, mining 2.5 million metric tons of ore with metals approximately worth $1.5 billion at current prices.

That said, marine biologists are also warning deep sea mining companies that their technology and interests are outpacing the capacity of scientists and governments to assess its environmental impact.

However, Nautilus asserts that they are taking time to carefully study the ecosystems of their mining sites and protect it as much as possible. You can see an image of the basic idea below.

Read This Next
Futurism
Mining Companies Turning to Automation to Boost Efficiency
Futurism
Rio Tinto becomes the first to use driverless trucks in its mining operations
More on Robots & Machines
FROM THE DEPT. OF...
Tuesday on futurism
The Best Smart TVs in 2022
FROM THE DEPT. OF...
Dec 1 on futurism
The Best Wired Earbuds in 2022
FROM THE DEPT. OF...
Dec 1 on futurism
The Best Gifts For Gamers in 2022
READ MORE STORIES ABOUT / Robots & Machines
Keep up.
Subscribe to our daily newsletter to keep in touch with the subjects shaping our future.
+Social+Newsletter
TopicsAbout UsContact Us
Copyright ©, Camden Media Inc All Rights Reserved. See our User Agreement, Privacy Policy and Data Use Policy. The material on this site may not be reproduced, distributed, transmitted, cached or otherwise used, except with prior written permission of Futurism. Articles may contain affiliate links which enable us to share in the revenue of any purchases made.
Fonts by Typekit and Monotype.