Here's what they think. 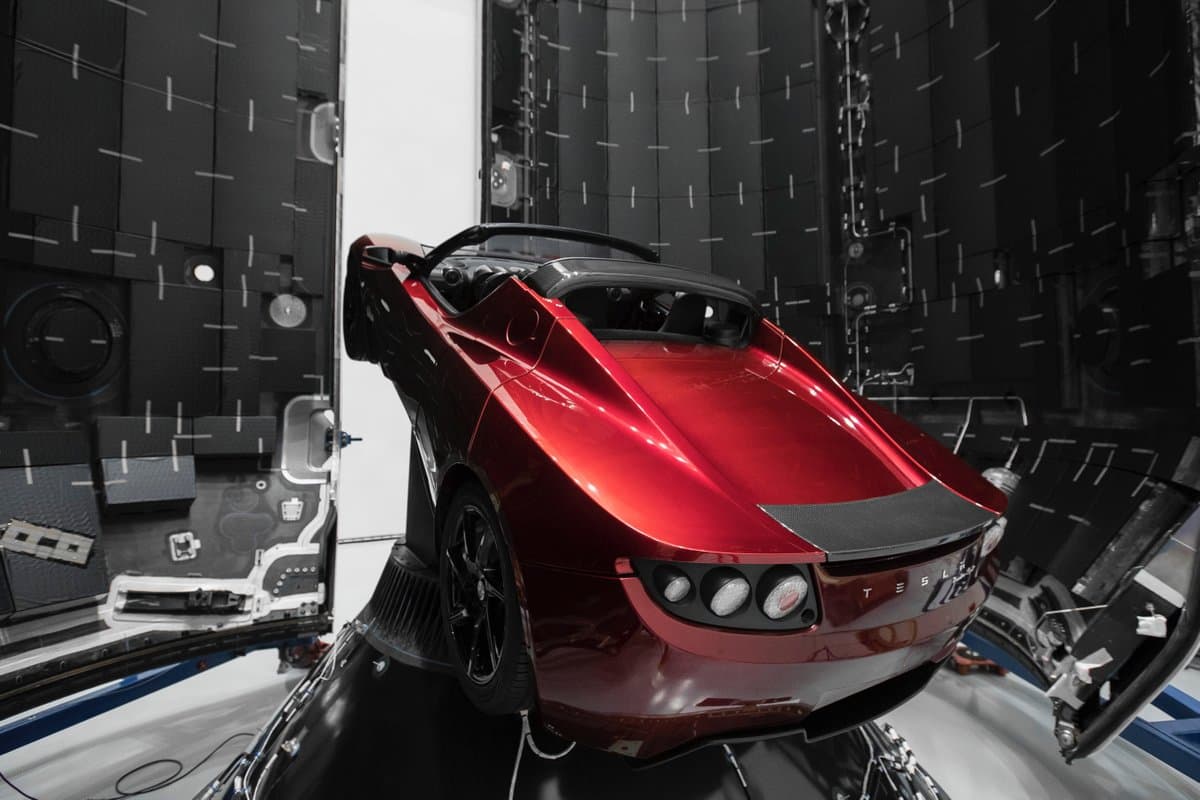 The First Car in Space

On December 21, SpaceX and Tesla founder Elon Musk posted seven photos to Instagram of his red Tesla roadster being encased within a Falcon Heavy rocket, seemingly confirming rumors (that he had himself started via Twitter) that he plans to make the vehicle the payload for the rocket's first test. The Falcon Heavy is slated to carry supplies into Mars orbit for future manned missions — but it has to get off the ground first.

After months of delays, the test mission is planned for sometime in January, and will utilize the Roadster as a dummy payload to be delivered into a "billion year elliptic Mars orbit.”

Musk has been very open about the fact that the first Falcon Heavy flight could very likely fail; this test flight will allow the rocket to demonstrate that it can carry real supplies into orbit, but without risking the loss of expensive equipment packed into the first-ever launch.

"There's a lot of risk associated with Falcon Heavy, a real good chance that that vehicle does not make it to orbit," he said at a discussion during the International Space Station Research and Development conference. "I want to make sure to set expectations accordingly. I hope it makes it far enough beyond the pad so that it does not cause pad damage. I would consider even that a win, to be honest."

Whether the launch is successful or not, there are still lots of questions remaining about the specifics of the unusual payload: is it legal to launch a car in the Falcon Heavy? Is it safe? Does it pose the threat of creating space debris? And, since Musk has stated that he loves the idea of "a car drifting apparently endlessly through space and perhaps being discovered by an alien race millions of years in the future," is a Tesla Roadster really the best legacy we can leave for aliens to discover?

We asked experts about the legal, technical, and extraterrestrial issues that arise from Musk's planned Roadster launch — and what might happen if that launch fails.

Whether Musk’s plans are feasible and/or advisable is, of course, not a legal question as such — so I’ll limit myself to the legal sides indeed. The short answer is yes. There is law both on the international plane and on the U.S. plane dealing with that.

The 1967 Outer Space Treaty (OST) imputes state responsibility and state liability on relevant states (in this case the U.S.) for private launches into, and activities in, space, such as Musk’s; SpaceX being both a U.S. company and launching from U.S. territory or facilities. It also offers the U.S. the possibility to exercise jurisdiction and control over SpaceX vehicles, so as to effectively make them into vehicles carrying the U.S. flag just like U.S.-registered ships or aircraft. The U.S. is one of the parties to the OST, together with all other important spacefaring nations, including Russia and China.

Other than that, the OST only imposes some rather general limitations to the legitimate use of space, such as the orbiting of weapons of mass destruction or (to some extent only) the wanton harmful interference with other states’ legitimate space activities. But in principle, outer space is a kind of global commons, an area free for exploration and use by all states and their private entities as long as properly authorized and supervised.

The 1972 Liability Convention (LC) has further detailed the liability regime for damage caused by space objects — including anything sent into outer space by Musk — again imputing that liability to the U.S.

Following on from these international obligations resting upon the U.S. (as well as from its own varied interests in a relatively orderly conduct of mankind’s activities in outer space) the U.S. has enunciated a set of laws over the last decades to implement these obligations, notably of authorization and supervision through a complicated licensing system, imposing the obligation to ensure upon licensees.

SpaceX needs to have a license prior to being allowed to launch, whereby the relevant office within the Federal Aviation Administration (FAA) scrutinizes the safety, security and other relevant public interest aspects of the launch, including a payload review addressing, in this case, the Tesla Roadster. In the license will include an obligation to repay the U.S. government the first tier of any international liability claim that the U.S. government would be required to pay out following its OST and LC obligations, a first tier likely amounting to a seven or eight figure dollar amount, against which SpaceX has to then insure itself.

As for the payload itself, the FAA does not have authority to license activities of payloads on-orbit or on celestial bodies. It has issued one favorable payload review for a lunar activity. A favorable payload review determination means that a payload does not present any issues affecting public health and safety, the safety of property, U.S. national security or foreign policy interests, or international obligations of the United States. It is not an authorization to operate. Congress would have to pass a law that grants jurisdiction to a federal agency, or agencies, to authorize on-orbit operations.

The FAA has said that any future payload reviews would have to be done on a case-by-case basis. Therefore, the FAA would have to conduct a review to determine if a payload consisting of a Tesla Roadster presents any issues affecting public health and safety, the safety of property, U.S. national security or foreign policy interests, or international obligations of the United States. And if a favorable review were made, there would still have to be a law in place that allows a federal agency to authorize on-orbit activities. In short, the legal environment is currently ambiguous for non-traditional space missions.

The issue as to whether Mr. Musk creates a debris hazard depends more on where in Mars orbit he puts the Roadster, rather than what material is in the required payload. However, the international debris community has yet to define the “safe limits" of debris in various regions of Earth orbit, much less in orbit around Mars or in any other planetary orbit.

The international community still needs to address the need for an international long-term management plan, starting with all of Earth orbit and then expanding to a plan for other planets. So far, the only plan that exists is a set of unenforceable guidelines to minimize the accumulation of debris in all Earth orbits below geosynchronous orbit.

Most of space is large enough that any mass we introduce could not cause a significant debris hazard. That is not true of the space around planets. Obviously, the closer an orbit is to a planet, the less available space there is, making collisions between orbiting objects more probable, and any mass in lower orbits becomes more dangerous due to the increase in velocity necessary to stay in orbit.

At this point, the safe option for Musk is to leave the payload in an orbit around the sun rather than in an orbit around Mars. However, we have already introduced artificial objects into Mars orbits and so Musk would not be the first to contribute to a future debris hazard there. By ignoring these issues in Mars orbit, we are beginning a process that created debris issues in Earth orbit that we have not yet adequately explored. We should not make the same mistake again.

Compare this payload to the Voyager pioneer probe, which was created to send messages to aliens. There are two aspects of considering both: one, would aliens understand any of it, would they be appropriate messages? And two, would they ever find it?

Regarding that second thing, the chances that they'll find the Voyager probe strike me as somewhat less than minuscule. To find this thing, it will have to get by chance maybe within one light year to someone else's star system. It takes a hundred thousand years for the fastest rockets to go to Alpha Centauri. And that doesn't matter because it will survive that journey, but in between - it's very small. It's the size of a compact car, and space is really big. I did a calculation a few weeks ago, and it would kind of be like locating a bacterium on the Pacific ocean without knowing it's there! And that's only a two-dimensional calculation; it's actually much worse than that because it's a 3D problem.

Now, if a payload is going into Mars orbit, that changes things. Theoretically, aliens might go into our solar system, look around Mars, [and] might eventually find it.

The first question, of: will they understand it, or be ticked off by the message, send battle wagons to earth to destroy the planet out of pique? [When it comes to the Voyager message], that's a question about alien sociology more than anything. But I think that probably the most informative thing would be any craft they find. You could think of it as if we had found one of the ships from the great age of exploration from the 1500's. There might be a Bible or two on board, but the interesting thing would be the ship itself. [We would know], so they steered with this big wooden paddle on the back, they had sails and ropes, and that would tell you something about the technical sophistication of that society. So aliens could probably learn more from the craft itself.

I think, if I’m going to construct a message for the aliens, I would just give them the internet. They could pick up a lot from that. There's a lot of redundancy there. If you look up "cat," you don't just see symbols. Their computers could look through the whole thing, referenced many times, and between images and funny videos they could get an idea of what that meant. I wouldn't go for a very carefully crafted, specific message: we’re humans and this is what we looked like. I'd just give them lots and lots of stuff.

Responses have been edited for brevity and clarity.

Read This Next
Shot Well
Head of NASA Relieved to Hear Elon Musk Isn't REALLY Running SpaceX
Makeover Scene
Space Tourist Says He's Thinking About Flying SpaceX Craft Up to Fix Hubble
Grain of Salt
There's a Huge Problem With Elon Musk's Promise to Bring Starlink to Iran
Sluggo Mode
SpaceX Has a Major Problem With Its Starlink Internet Connections
Dumpster Fire
SpaceX Tested Starship's Engines and Accidentally Caused a Large Fire
More on Off World
Trashing Orbit
7:17 PM on the byte
Elon Musk Says SpaceX May Build Starship That Dies on Purpose
Cat and Mouse
3:38 PM on the byte
SpaceX to Launch "Hunter" Satellites for Targeting Rival Spacecraft
Space In Space
1:44 PM on the byte
NASA Official Admits There's a Bit of an Issue on the Space Station
READ MORE STORIES ABOUT / Off World
Keep up.
Subscribe to our daily newsletter to keep in touch with the subjects shaping our future.
+Social+Newsletter
TopicsAbout UsContact Us
Copyright ©, Camden Media Inc All Rights Reserved. See our User Agreement, Privacy Policy and Data Use Policy. The material on this site may not be reproduced, distributed, transmitted, cached or otherwise used, except with prior written permission of Futurism. Articles may contain affiliate links which enable us to share in the revenue of any purchases made.
Fonts by Typekit and Monotype.