A recent Twitter exchange highlights the ongoing rivalry between Blue Origin and SpaceX. 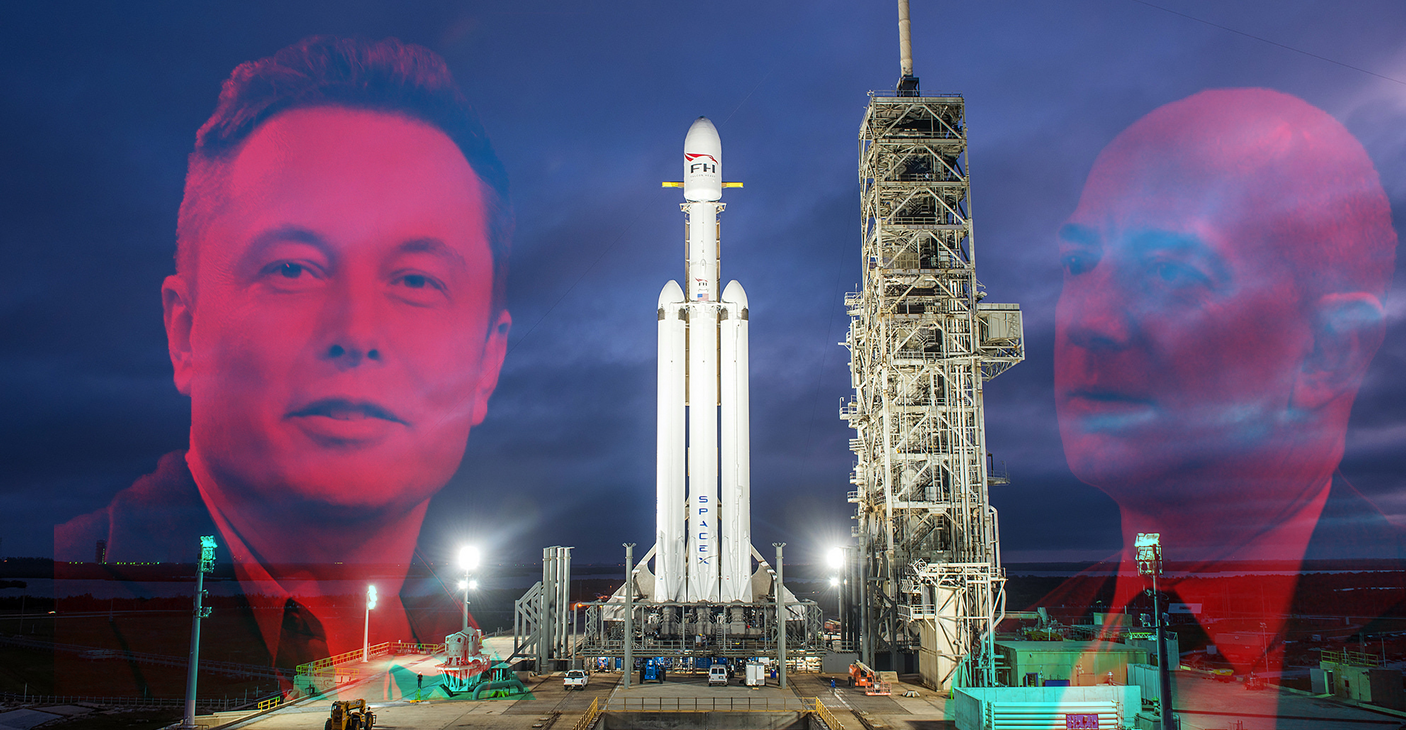 SpaceX obsessives have spent weeks anticipating the launch of the Falcon Heavy, Elon Musk's massive rocket designed to shuttle humans to Mars. Finally, Musk tweeted that February 6 was the day everyone should steel themselves for the Falcon to take flight.

Jeff Bezos, Amazon CEO and founder of competing private spaceflight company Blue Origin made it clear that he'll be watching, too. Bezos tweeted a good-luck message to SpaceX in anticipation of the launch:

You might be tempted to read these tweets as a sincere gesture of camaraderie. After all, the two companies aren't in direct competition — SpaceX plans to send people to Mars, while Blue Origin wants to dominate the emerging space tourism industry, which will launch paying astronauts into orbit around the Earth.

Bezos' hashtag — Gradatim ferociter, Latin for "step by step, ferociously" — could be read as a diplomatic acknowledgment that a successful launch for any private spaceflight company is a victory for the industry overall.

But that reading's pretty Pollyanna, as far as these things go. That hashtag Bezos used? It happens to be Blue Origin's motto. So: Bezos is effectively trolling SpaceX by tweeting his own company's motto at them, the day before the Falcon Heavy's launch. "Go for it, don't forget, we're coming for you," is the basic insinuation here. And Musk's "kissy face emoji" response?

Musk and Bezos have had openly aggressive words before. When Bezos tweeted that one of Blue Origin's launches was "rare," Musk was ready with the clap-back:

@JeffBezos Not quite "rarest". SpaceX Grasshopper rocket did 6 suborbital flights 3 years ago & is still around. pic.twitter.com/6j9ERKCNZl

A failed Falcon Heavy launch could be a huge setback for SpaceX, which up until this point has been blasting past the competition (like Blue Origin) with the sheer pace and boldness of its launches. That kind of failure could open up an opportunity for Blue Origin's reusable New Glenn rocket to take center stage.

Of course, maybe we're just projecting, here. There's no way to know what Bezos is thinking. Maybe one titan of industry is actually, genuinely hoping his rival titan of industry has a rocket launch that goes off without a hitch. But also? If you genuinely believe that, we've got a bridge to sell you, and it goes all the way to Mars.

Read This Next
Shot Well
Head of NASA Relieved to Hear Elon Musk Isn't REALLY Running SpaceX
Overview Effect
William Shatner Says His Space Trip Left Him With a Feeling of Terrible Grief
Makeover Scene
Space Tourist Says He's Thinking About Flying SpaceX Craft Up to Fix Hubble
Grain of Salt
There's a Huge Problem With Elon Musk's Promise to Bring Starlink to Iran
Sluggo Mode
SpaceX Has a Major Problem With Its Starlink Internet Connections
More on Off World
Space Junk News
5:06 PM on the byte
Two Large Chunks of Space Debris Just Almost Collided in an Epic Disaster
Mars Drop
2:16 PM on the byte
NASA's Mars Rover Perseverance Just Dropped Off Its Last Sample
Final Selection
Yesterday on the byte
NASA Finalizing Secretive Decision on First Astronauts for the Artemis Moon Mission
READ MORE STORIES ABOUT / Off World
Keep up.
Subscribe to our daily newsletter to keep in touch with the subjects shaping our future.
+Social+Newsletter
TopicsAbout UsContact Us
Copyright ©, Camden Media Inc All Rights Reserved. See our User Agreement, Privacy Policy and Data Use Policy. The material on this site may not be reproduced, distributed, transmitted, cached or otherwise used, except with prior written permission of Futurism. Articles may contain affiliate links which enable us to share in the revenue of any purchases made.
Fonts by Typekit and Monotype.