"I'm going to be frank, civilization is feeling a little bit fragile these days." 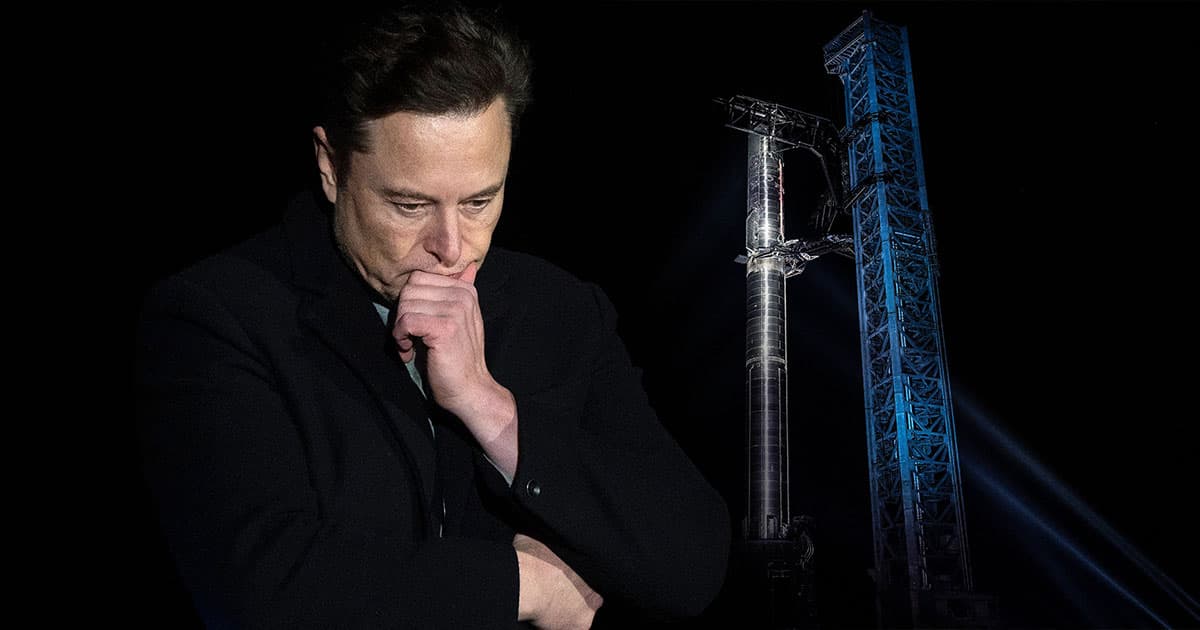 SpaceX CEO Elon Musk has once again expressed one of his favorite talking points: the demise of civilization.

It's a theme he's touched upon countless times before. It's a convenient narrative, after all, to justify taking humanity to Mars and establishing a self-sustaining city there — while Earth crumbles to dust.

"I'm going to be frank, civilization is feeling a little bit fragile these days," Musk said at the event, adding that we need to "build that city on Mars as soon as possible and secure the future of life."

It's a perhaps-overdramatic vision of our impending doom, but given Musk's continued obsession with settling space, also just par for the course.

And as usual, he could be selling the vision a bit harder.

"The sales pitch for going to Mars is that it's gonna be cramped, dangerous, difficult, very hard work, you might die," he added.

Rather than the Red Planet acting as a simple "escape hatch," Musk said it will be "extremely dangerous." He went as far as to call Mars a "fixer-upper of a planet."

Musk has repeatedly voiced his concerns over humanity collapsing due to natural disasters, comet strikes, and fewer people having children.

"I think one of the biggest risks to civilization is the low birthrate and the rapidly declining birthrate," he said at The Wall Street Journal’s CEO Council in December. "Please look at the numbers — if people don’t have more children, civilization is going to crumble, mark my words."

His profitable solution: 1,000 heavy lift Starships, made by SpaceX, that could hoist as many as 100 passengers to the Red Planet per trip — once they have a new home base to survive there, of course.

Apart from his characteristically alarmist remarks, Musk didn't reveal all too much during this week's presentation. For instance, we still don't know when Starship will embark on its first voyage into orbit.

He did, however, suggest that the company could be flying a Starship every six to eight hours. It's a wildly ambitious plan that would rely on the company's "launch and catch" tower, which was looming impressively behind the billionaire CEO during the presentation.

But most of all, Musk took to the time this week to keep the dream of Starship keeping humanity alive.

"This is some really wild stuff," he promised the crowd. "It's hard to believe it's real, but there it is."

More on the presentation: Elon Musk: Each Starship Launch Could Cost Just $1 Million

Read This Next
A Sip of Opal
NASA Discovers Precious Gemstones on Mars
Shot Well
Head of NASA Relieved to Hear Elon Musk Isn't REALLY Running SpaceX
Martian Oases
Scientist Proposes Growing a Forest Inside a Bubble on Mars
Big Impact
Meteorite Hit Mars So Hard NASA Thought It Was a Quake
Makeover Scene
Space Tourist Says He's Thinking About Flying SpaceX Craft Up to Fix Hubble
More on Off World
Killernova
Yesterday on the byte
Scientists Find "One in Ten Billion" Star System Primed to Explode in Titanic Kilonova
Lonely Planet
Feb 5 on futurism
Scientists Find Nearby Planet the Same Size of Earth, Plan to Search It for Life
Take Cover
Feb 4 on the byte
Space Startup Blows Up Another Giant Inflatable Space Station Module
READ MORE STORIES ABOUT / Off World
Keep up.
Subscribe to our daily newsletter to keep in touch with the subjects shaping our future.
+Social+Newsletter
TopicsAbout UsContact Us
Copyright ©, Camden Media Inc All Rights Reserved. See our User Agreement, Privacy Policy and Data Use Policy. The material on this site may not be reproduced, distributed, transmitted, cached or otherwise used, except with prior written permission of Futurism. Articles may contain affiliate links which enable us to share in the revenue of any purchases made.
Fonts by Typekit and Monotype.