Elon Musk Says He Wants to Use Wealth to Get Humans to Mars, Not Pay Taxes

"My plan is to use the money to get humanity to Mars and preserve the light of consciousness." 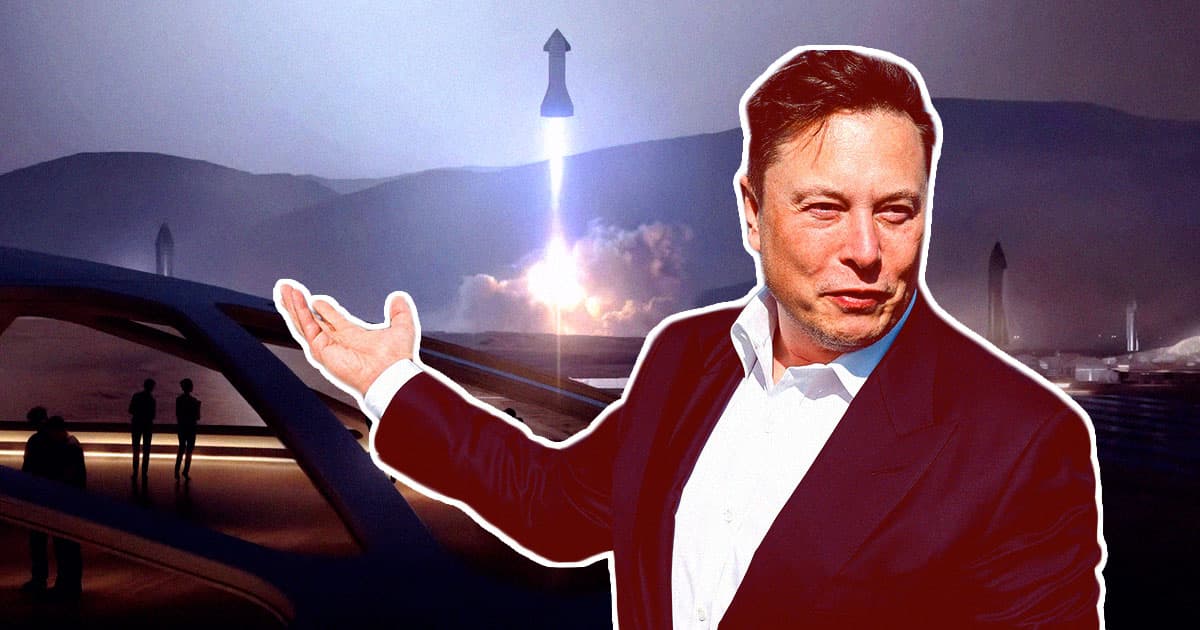 The billionaire — who also happens to be the richest person in the world — has other goals in mind for his tremendous wealth: making humanity interplanetary.

"My plan is to use the money to get humanity to Mars and preserve the light of consciousness," he tweeted today.

Thanks to Tesla closing a massive deal with rental car company Hertz this week, Musk's personal net worth is closing in on $300 billion — which, just to be clear, is an absolutely obscene amount of money, despite the majority being tied up in shares.

Musk also resorted to a common conservative talking point: that the ultra-wealthy can only pay so much.

"US national debt is ~$28,900 billion or ~$229k per taxpayer," Musk argued in a tweet on Wednesday. "Even taxing all 'billionaires' at 100 percent would only make a small dent in that number, so obviously the rest must come from the general public. This is basic math."

Ironically, Musk has often relied on government spending to grow his businesses, including a $465 million loan from the US Energy Department in 2010, as Fortune points out.

And NASA's Human Landing System contract to develop a lunar lander also netted SpaceX a $2.9 billion contract, paid out over a number of years.

Musk may have the last laugh — but not because of his tweets. The billionaire taxation plan is facing criticism from within the Democratic party, putting it on shaky ground.

The SpaceX CEO has long been of the opinion that the best thing humanity can accomplish is to establish bases on other planets, especially Mars.

But has Musk forgotten about Earth? His tremendous wealth could have a tremendously positive impact back on our home planet.

Musk's net worth increased by over $36 billion this week. Just $6 billion of that could help "42 million people that are literally going to die if we don't reach them," the UN's World Food Program chief David Beasley told CNN. "It's not complicated."

READ MORE: Elon Musk to Congress: Drop the billionaire tax. It will only mess with ‘my plan to get humanity to Mars’ [Fortune]

Read This Next
Shot Well
Head of NASA Relieved to Hear Elon Musk Isn't REALLY Running SpaceX
Martian Oases
Scientist Proposes Growing a Forest Inside a Bubble on Mars
Makeover Scene
Space Tourist Says He's Thinking About Flying SpaceX Craft Up to Fix Hubble
Grain of Salt
There's a Huge Problem With Elon Musk's Promise to Bring Starlink to Iran
Sluggo Mode
SpaceX Has a Major Problem With Its Starlink Internet Connections
More on Off World
Light Me Up
Yesterday on the byte
Wall of Lasers Cuts Across Hawaii's Night Sky
Water Sign
Yesterday on the byte
Scientists Find New Evidence of Hidden Ocean World in Our Solar System
Trashing Orbit
Thursday on the byte
Elon Musk Says SpaceX May Build Starship That Dies on Purpose
READ MORE STORIES ABOUT / Off World
Keep up.
Subscribe to our daily newsletter to keep in touch with the subjects shaping our future.
+Social+Newsletter
TopicsAbout UsContact Us
Copyright ©, Camden Media Inc All Rights Reserved. See our User Agreement, Privacy Policy and Data Use Policy. The material on this site may not be reproduced, distributed, transmitted, cached or otherwise used, except with prior written permission of Futurism. Articles may contain affiliate links which enable us to share in the revenue of any purchases made.
Fonts by Typekit and Monotype.