Is it a gigantic planet five times the size of Earth — or an apple-sized black hole? 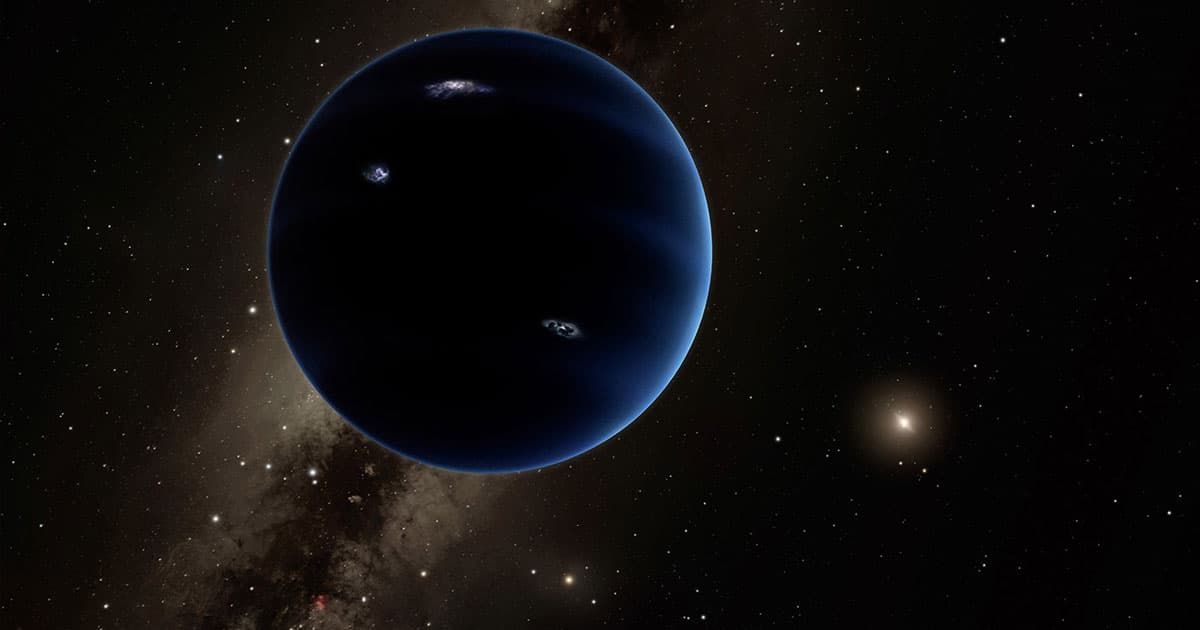 Is there a ninth planet lurking beyond the orbit of Neptune?

Astronomers have been observing strange gravitational patterns of a cluster of bodies known as "trans-Neptunian objects," or TNOs, that could be explained by the presence of  massive ninth planet in our solar system. The hypothetical planet, dubbed "Planet Nine," would orbit our star at hundreds of times the distance between the Earth and the Sun.

It's been a contentious topic, with some writing off the odd behavior of TNOs as being caused by a cluster of much smaller space rocks. Others predict that such a planet would be five times the mass of the Earth, orbiting our star at about 400 times the Earth's distance from the Sun.

Finally, there's the possibility that Planet Nine is actually a teeny-tiny black hole left over from the Big Bang. So tiny, in fact, that it'd only measure about five centimeters across — basically impossible to see with any kind of telescope.

"There has been a great deal of speculation concerning alternative explanations for the anomalous orbits observed in the outer solar system," explained Amir Siraj, a Harvard undergraduate student, in a statement. "One of the ideas put forth was the possibility that Planet Nine could be a grapefruit-sized black hole with a mass of five to 10 times that of the Earth."

So which is it then? In a new paper accepted into the The Astrophysical Journal Letters, Siraj, alongside a team of astronomers from Harvard University and the Black Hole Initiative outlined a newly developed method that could hopefully answer that question once and or all.

Their plan is to look for accretion flares given off as the tiny black hole gobbles up matter surrounding it. If they find some, it'd mean that Planet Nine is actually a black hole. "In the vicinity of a black hole, small bodies that approach it will melt as a result of heating from the background accretion of gas from the interstellar medium onto the black hole," Siraj said.

"Because black holes are intrinsically dark, the radiation that matter emits on its way to the mouth of the black hole is our only way to illuminate this dark environment," added Avi Loeb, professor of science at Harvard who was also involved in the research.

The team is placing their bets on the upcoming Legacy Survey of Space and Time (LSST) mission taking place at the Vera C. Rubin Observatory in Chile. Astronomers involved in the mission are hoping to answer questions about the nature of dark energy and dark matter as well as the formation and properties of planets in our solar system.

"LSST has a wide field of view, covering the entire sky again and again, and searching for transient flares," Loeb said. "Other telescopes are good at pointing at a known target, but we do not know exactly where to look for Planet Nine. We only know the broad region in which it may reside."

According to Loeb, the LSST's "unprecedented depth" will be able to spot even the smallest of flares.

It's not the only attempt to uncover the mysteries behind Planet Nine. Most recently, a different team of astronomers announced it's hoping to launch a fleet of thousands of "nanospacecraft" to search for the mysterious object.

Unfortunately, that vision is still a moonshot, with cost estimates breaking the $1 billion mark — that is, if it's even feasible from a technological standpoint in the first place.

More on Planet Nine: A Black Hole May Be Orbiting Our Sun. This Guy Wants to Find It.

Read This Next
Falling In
Objects We Thought Were Black Holes May Actually Be Wormholes, Scientists Say
Black Hole Snapshot
Scientists Release Image of Black Hole at Center of Our Galaxy
Sucking Atmospheres
Scientists Spot Ravenous "Vampire" Star Devouring Its Neighbor
Yuge
Scientists Discover Enormous Black Hole Right Near Our Galaxy
Planet XP
Scientists May Have Accidentally Spotted an Extra Planet in Our Solar System
More on Hard Science
Tractor Beam
Jan 26 on the byte
Scientists Build Working Tractor Beam, Although It's Comically Tiny
Having a Blast
Jan 18 on the byte
New Study Shows Where You Should Hide to Survive a Nuclear Attack
Offworld Amino
Jan 15 on the byte
Scientists Find Building Blocks of Life in Meteor That Smashed Into Family's Driveway
READ MORE STORIES ABOUT / Hard Science
Keep up.
Subscribe to our daily newsletter to keep in touch with the subjects shaping our future.
+Social+Newsletter
TopicsAbout UsContact Us
Copyright ©, Camden Media Inc All Rights Reserved. See our User Agreement, Privacy Policy and Data Use Policy. The material on this site may not be reproduced, distributed, transmitted, cached or otherwise used, except with prior written permission of Futurism. Articles may contain affiliate links which enable us to share in the revenue of any purchases made.
Fonts by Typekit and Monotype.