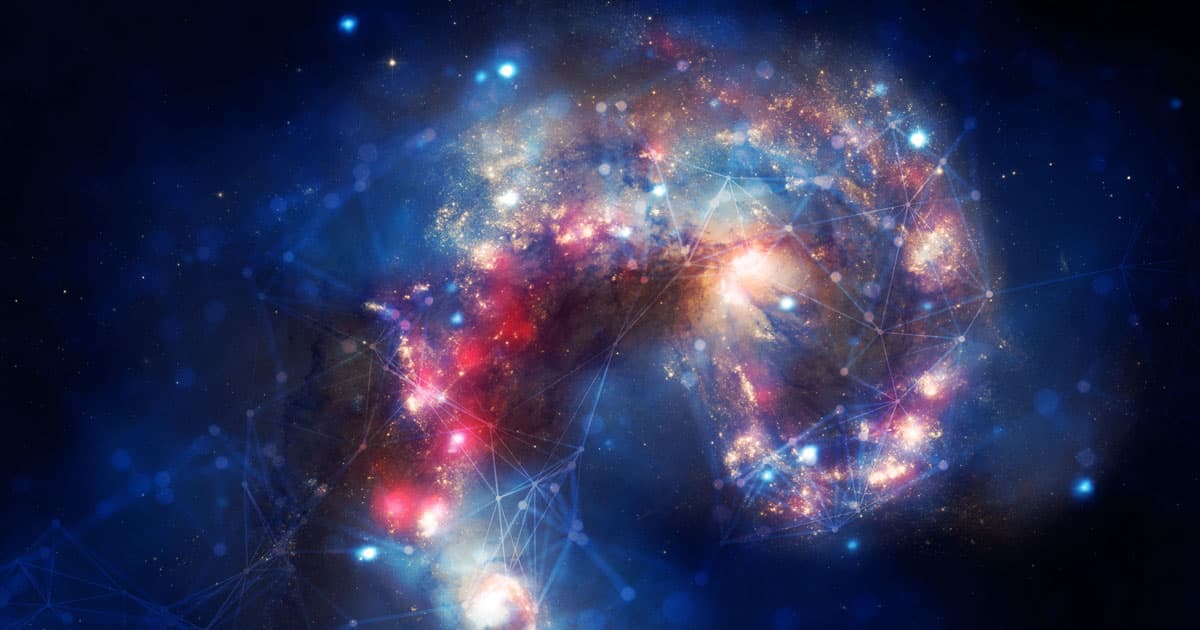 Since we can't travel billions of years back in time — not yet, anyways — one of the best ways to understand how our universe evolved is to create computer simulations of the process using what we do know about it.

Most of those simulations fall into one of two categories: slow and more accurate, or fast and less accurate. But now, an international team of researchers has built an AI that can quickly generate highly-accurate, three-dimensional simulations of the universe — even when they tweak parameters the system wasn't trained on.

"It’s like teaching image recognition software with lots of pictures of cats and dogs, but then it’s able to recognize elephants," researcher Shirley Ho said in a press release. "Nobody knows how it does this, and it’s a great mystery to be solved."

The scientists detail how they created this universe simulator, which they've named the Deep Density Displacement Model (D3M), in a study published in the journal Proceedings of the National Academy of Sciences.

That system needed 300 computation hours to create just one of its simulations, but after training on the data, D3M was able to produce its own simulations of a cube universe 600 million light-years across in just 30 milliseconds. Those simulations were more accurate than those of the existing "fast" systems, which need a couple of minutes to create a simulation.

But speed isn't the most remarkable thing about D3M.

That would be its ability to accurately simulate what the universe would look like even if the researchers changed parameters that weren't included in its training data. For example, they could tweak the percent of dark matter in their universe, and D3M could accurately simulate that universe's evolution.

"We can be an interesting playground for a machine learner to use to see why this model extrapolates so well, why it extrapolates to elephants instead of just recognizing cats and dogs," Ho said in the press release. "It’s a two-way street between science and deep learning."

Read This Next
Bangs and Bounces
Scientists Say Stuff Might Have Been Happening Before the Big Bang
Hubble Tension
Most Precise Measurements of the Universe Suggest That Something Is Very Wrong
Space Lumps
Scientists Say We May Be Extremely Wrong About the Universe
I Know Kung Fu
Columbia Professor: There's a 50% Chance We're Living in a Simulation
Massive Gravity
New Theory Could Solve Universe’s Biggest Paradox
More on Hard Science
Horrible Geese
Yesterday on futurism
Furious Geese Are Defeating Humans, Scientists Find
Quacks Like a Duck
Dec 1 on futurism
Those Headlines About Scientists Building a Wormhole Are Total Nonsense, People
It From Bit
Nov 22 on the byte
A Scientist Is Crowdfunding an Experiment to Check if We Live in a Simulation
READ MORE STORIES ABOUT / Hard Science
Keep up.
Subscribe to our daily newsletter to keep in touch with the subjects shaping our future.
+Social+Newsletter
TopicsAbout UsContact Us
Copyright ©, Camden Media Inc All Rights Reserved. See our User Agreement, Privacy Policy and Data Use Policy. The material on this site may not be reproduced, distributed, transmitted, cached or otherwise used, except with prior written permission of Futurism. Articles may contain affiliate links which enable us to share in the revenue of any purchases made.
Fonts by Typekit and Monotype.