What Are Planck Stars? How Do They Differ From Black Holes? 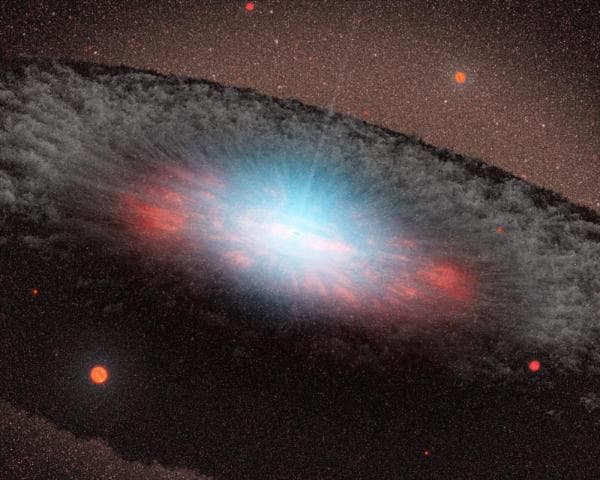 No matter how much evidence there is supporting their existence, black holes remain firmly in the realm of theoretical physics. Because of their properties—their structure, the fact that they emit no light naturally, where they are found and how they work—they lurk in the shadows.

However, not all scientists, including world-renowned physicist Stephen Hawking, assert that traditional black holes are necessary to the framework of modern physics (they are, however, perfectly viable mathematical solutions, no matter how you shake it)—in fact, some go a step further and say that we should replace them with one of many different alternatives..

Some of these alternatives include gravastars, wormhole hybrids and quark stars. Last year, two astrophysicists—Carlo Rovelli (University of Toulon, France) and Francesca Vidotto (Radboud University in The Netherlands)—introduced another: a theoretical object called a Planck star. It isn't a replacement for the standardized black hole model per se, more like a reimagining.

A black hole of the traditional variety has two main components: an event horizon and the singularity itself. The event horizon is pretty straightforward; It's the point from which nothing that enters can escape. The singularity (the "heart" of a black hole), on the other hand, is where things get tricky.

The curvature of spacetime within this infinitely dense point also becomes infinite. As a result, we cannot deduce what actually happens inside of a singularity. Even worse, what we have come up with appears to contradict more than one universal rule or law.

The biggest issue pertains to the manner in which black holes handle information—information that describes the quantum properties of all the matter black holes swallow. Physics says that information can not, should not, be destroyed, yet it effectively is if it gets sucked into the inescapable singularity. This conundrum, called the black hole information paradox, is important in more ways than one, but we'll get to that in a moment.

The Workings Of a Planck Star:

The Planck star relies on something called the big bounce hypothesis; It suggests that the universe is geared toward an infinite cycle of death and rebirth. In other words, the big bang wasn't necessarily the beginning of everything—just this version of the universe. Before ours, a different universe existed: one that expanded dramatically in size, contracted, collapsed and began anew (sort of like reincarnation on a cosmic scale).

If you would prefer, imagine having that one line from "Closing Time"—"Every new beginning comes from some other beginning's end"—on an eternal loop...

It's believed that this bounce would be preceded by a crunch, which, as the polar opposite of the Big Bang, hinges on the expansion of the universe stopping at some point—particularly when the average density of spacetime becomes critical. After triggering the collapse, all of the matter in existence would be drawn back together, existing in a super-dense state once more (perhaps coalescing into a black hole-like singularity, similar to how the universe started out).

The bounce would be enacted once the matter is compressed to planckian size proportions, at least, that's the working theory. They believe that, by reexamining what the big crunch would entail, we can possibly glean insight on the behavior of black holes.

What if, instead of core-collapse supernovae—how we believe all stellar mass black holes form—collapsing into infinitely dense points ("singularities"), the collapse is halted by a "quantum pressure", they explain, that is similar to the one that "prevents an electron from falling into the nucleus of an atom."

The idea, in and of itself, isn't completely absurd. After all, a pressure called neutron degeneracy can halt the collapse of stars within a certain mass threshold (leaving neutron stars or pulsars behind), whereas electron degeneracy serves the same purpose for stars that weigh as much as the Sun (to be fair, white dwarfs and neutron stars are very different beasts).

In addition to this quantum effect preventing collapsing matter from reaching infinite density, they suggest it would, on a grander scale, imply that the bounce "does not happen when the universe is of planckian size, as was previously expected; it happens when the matter energy density reaches the Planck density. Instead, the universe ”bounces” when the energy density of matter reaches the Planck scale, the smallest possible size in physics."

"In other words, quantum gravity could become relevant when the volume of the universe is some 75 orders of magnitude larger than the Planck volume," further noted in arXiv's blog.

Of course, if one of these "objects"exist, it would be incomprehensibly small (even compared to an atom), with a diameter of around 10^-10 centimeters. Still yet, it would be around 30 orders of magnitude larger than the Planck length (one is equal to 1.61619926 × 10-35 meters).

As to how a Planck star would look to an observer, and this is the really interesting part, the effects of time dilation would factor in. Time, as it goes, doesn't run the same for everyone, everywhere. It flows differently from the surface of Earth than in low-Earth orbit... though the effect is negligible. The rate at which time ticks is really thrown for a loop when we venture far beyond the most massive stars and planets, into orbit around intermediate to supermassive black holes—objects so dense and with such powerful pulls, nothing... not even light... can escape.

In fact, before light even enters the event horizon, it begins to feel the drag of time dilation. We can't be sure—to reiterate, we don't know what happens inside black holes—but some of the best minds in the world have suggested that time nearly comes to a complete standstill. Yet nothing appears amiss from the outside looking in.

If this is confusing, think back to the water world featured in 'Interstellar.' (Spoilers, obviously) Because of its proximity to Gargantua—the black hole/wormhole the crew traveled through—what was an hour to the people on the ground was years, decades even, elsewhere. Because of this, and despite the fact that the first human landed on the planet nearly a decade beforehand, it's probable that the female astronaut had only been there for a few hours when the second group arrived. Her pulse beacon was still active, yet no new transmissions were seeping out.

Even so, any such Planck star may only live for a short while before the 'bounce:' about the "length of time it takes for light to travel across it." However, to an outsider, it would appear to last for millions, even billions, of years... continuing to exist alongside the black hole itself.

At this point, you may be wondering exactly what physicists see in this highly theoretical model. Ultimately, it circles back around to the paradox dealing with black holes and information. According to the duo, if we were to switch the singularity out with a Planck star, this paradox would become a non-issue.

They claim that, after x amount of time, the black holes, which slowly lose mass over the course of their lives through the gradual emission of Hawking radiation, eventually meet the expanding Planck stars at their cores: At which point, all of the information they once held would be expelled.

What's more? They argue that Planck stars could "produce a detectable signal, of quantum gravitational origin, around the 10−14cm wavelength." In other words, there may be a way to find one, or at least narrow it down, by looking for certain gamma ray signatures. In fact, there's a chance we have already detected their signature, and we just don't know it yet.

You can find the paper, "Planck Stars," here. The article published on arxiv's medium blog is also very informative.