Have Quark Stars Been Discovered? 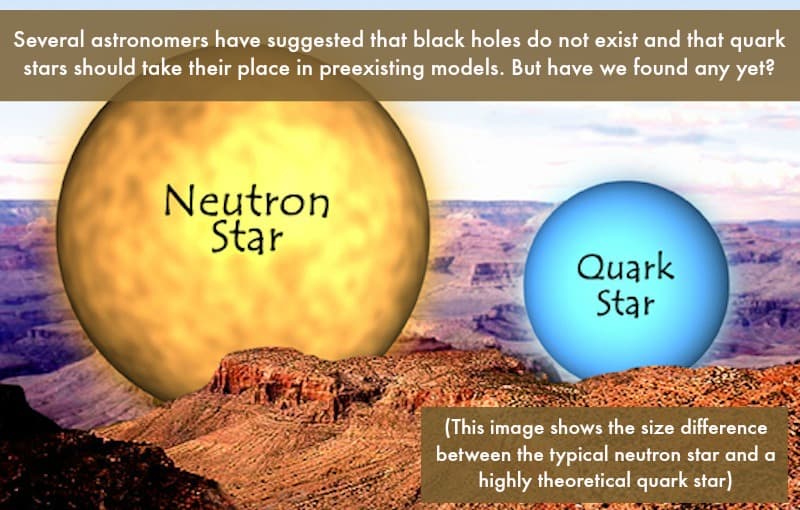 "Have any "quark stars" been discovered or are neutron stars the final stop before full collapse to a singularity?

If neutron stars weren't unique enough already, quark stars are believed to be one of the most unusual variations of Neutron stars that astrophysicists believe should exist. First:

WHAT ARE NEUTRON STARS?

When one of these stars ceases to function as a supergiant or a hypergiant, it cannot prevent the core from being affected by its own gravitation forces. As the core collapses, it releases an incredibly violent explosion which ejects the non-core matter outwards. This process is known as a supernova.

What happens at the center of this supernova is that the core begins to fuse its way to iron-56. Sadly it can't go any farther because at low pressures iron-56 has the highest binding energy requirement of any element, so fusion or fission of iron 56 will require additional energy adding. The iron core continues to accumulate until it reaches 1.4 solar masses -Chandrasekhar mass.

The electron degeneracy pressure that had countered the gravitational force deteriorates and the core then collapses inwards. Due to the extremely high density of this collapse, it becomes energetically favorable for protons and electrons to combine, thus forming neutrons (and neutrinos). This is now an ultra-dense star; a neutron star.

To put the density into perspective:

the equivalent gravity of a Neutron star would make you weigh 190,000,000,000 times what you do currently - the gravitational acceleration of the typical neutron star is placed in the region of 1.86 x 10¹² m/s².

At the center of only the most ultra-dense Neutron star is believed to be where the quark creation process occurs. As the immense pressure is exerted upon the neutron particles within the center of the ultra-dense neutron star, it actually breaks up into its constituent components:quarks.

Quarks come in 6 theoretical types (or flavors), but the ones we are concerned with are up, down and strange quarks. These will remain in neutron stars to form strange matter, which will consist entirely of this quark matter.

One of the difficulties with detecting quark stars is that they are so rare. They rely on an ultra-dense neutron star to be formed from rare super and hypergiant stars. These ultra-dense neutrons then decay into smaller quark stars which emit relatively no energy when compared to its siblings of magnetars or pulsars.

In fact, the quark star is defined as being 'electro-weak' due to it emitting only neutrinos. These are virtually without mass and extremely difficult to detect on Earth.

However in 2010, Professor Glenn Starkman revealed that a very small percentage of the energy emitted from quark stars is believed to be emitted as light, which is where he is hoping to eventually pioneer a detection signature - referred to as bremsstrahlung emission, which translates to 'deceleration radiation.'

Some astrophysicists determine that the absence of a visible star among supernova detritus could indicate the presence of a quark star. Or a black hole...

HAVE WE EVER FOUND ONE?

Several candidates that we have identified as black holes are currently being considered for classification as quark stars. How we go about detecting them is the tricky part...

TO ADDRESS THE ORIGINAL INQUIRIES:

Unfortunately no Quark stars have been 100% confirmed, but there have been several potential candidates identified, which include: SN 1987A, SN2005gj, SN2005ap, SN2006gy, XTE J1739-285. What we need now is to employ a guaranteed method of verifying their quark nature such as those listed above (black hole declassification and bremsstrahlung emission).

As a fun side-note, it is believed that the type of matter that is powers quark stars could destroy the universe (and everything in it). Read about it here.