Introducing: The Newest Member of the "Ten Largest Stars in the Known Universe" 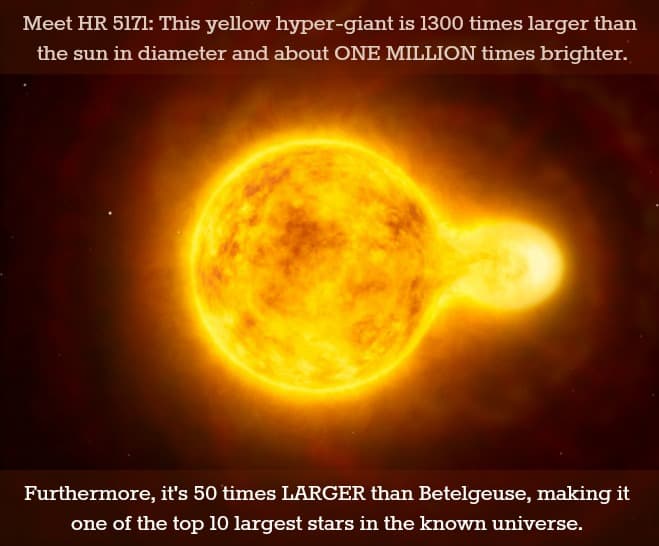 Stars, like people, come in a variety of flavors. Firstly, there are red-dwarfs. The name itself conveys important information about the stars belonging to this class. They are small (hence the "dwarf" part) and red in color (hence the "red" part). Then, we have medium-sized stars. Our sun is one such star. These stars vary in spectral classification, but the Sun is technically called a "yellow-dwarf." The next rung in the ladder of star types contains the massive, extremely hot, and very bright stars. These are commonly known as "super-giants." Using the ladder metaphor, if super-giants are at the top, the star we're about to discuss is practically in low-Earth orbit.

The European Southern Observatory JUST announced new findings related to a star that is so large, it ranks among the ten largest stars in the known universe. The star in question, called HR 517S (other names include V766 Cen and  HD 119796), has many notable features. It's a high-mass variable star and it has a much smaller partner. Astronomers have known about its small companion for a while now, but it wasn't until very recently that they knew just how much influence this tiny star has on its much larger counterpart.

Using the ESO's "Very Large Telescope Interferometer" (VLTI), a team of international researchers deployed a technique called interferometry, which essentially makes use of the light collected by several different telescopes. When combined, astronomers can peer further through the veil of space and see things in unprecedented clarity. Such was the case with this star system.

The team learned that not only was the tiny partner much closer to the primary star than expected (giving the system the likeness of a peanut), but the star is basically providing HR 517S with a seemingly endless buffet of stellar material. The celestial cannibalism going on in the system has given HR 517S  the juice it needs to power its incredibly rapid expansion, which has resulted in the star growing to become more than 1300 times larger than the Sun in diameter (and it's more than a million times more luminous).

If you're having a hard time envisioning just how large that is, let's compare its size to that of Betelgeuse (the star famous for being one of the largest of its kind). Betelgeuse is FIFTY percent less massive than HR 517S. As stated above, these facts make the star one of the largest stars in the known universe (it comes in on the top ten list).

Similarly, it is the largest star belonging to its spectral classification group, which is the "yellow hyper-giant" classification. Stars of this type generally are the biggest and brightest stars in the universe. They also grow much more unstable than stars that belong to the super-giant group as they evolve, thus they are quite a bit more energetic and can generate a much more extensive atmosphere (this makes it easier to pin down key details about the star's interior and external structure). Over all, this research has given us more insight into this spectral class than any other research done before.

The system is located approximately 12 000 light-years from Earth in the Centauri constellation. Given how immensely huge it this star is, one would think it would stick out like a sore thumb. In reality, the star is hardly perceptible to the naked eye, unless you know exactly what you're looking for.  This likely won't change in the years to come, despite the fact that the star is unstable not long for this universe (in astronomical terms). Soon, it will reach the end of its life-span, going out in a spectacular supernova blast. Ultimately, its relative anonymity is a testament to just how large the universe is. Plus, it reminds us that much is left to still be discovered.

Read the full press release here. Or, see: "4 of the Largest Objects in the Known Universe"