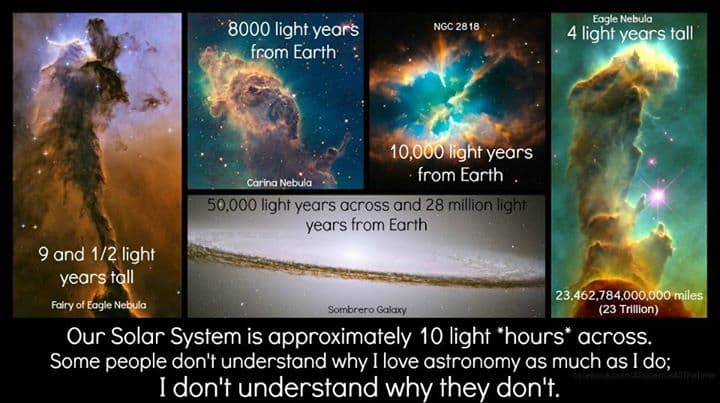 When the Hubble Space Telescope celebrated its twentieth anniversary of scouring the stars, this image was released to celebrate the millions of observations Hubble has made. These images provided us with a plethora of information that wasn't available beforehand. Hubble has literally revolutionized many aspects of astronomy and physics; however, one thing it cannot do is help us wrap our minds around the sheer size of some of these deep-space regions. But let’s try!

Light, which is the fastest moving thing in the universe, travels at an incredible:

If those numbers are daunting, think of it this way:

Cassini traveled six years and nine months to reach Saturn, the voyager probes were launched in the 1970's and still haven't left our solar system, it takes a full 8 minutes for sunlight to reach us here on Earth, 5.5 hours for light from the sun to reach Pluto (or 5 light-hours) and a full 26,000 years for light from the sun to reach Sagittarius A* (the black hole at our galaxy's center).

Now, the first image is one of the most famous star-forming regions currently known. This is the Carina Nebula, which lies some 6,500 (or more) light-years from Earth. Not only is it one of the most bright and beautiful places in the galaxy, it is also more than 100 light-years in length, which makes it one of the largest cosmic nebulae found within the borders of the Milky Way.

Click the link to take a look at the Sombrero galaxy, which is also known as NGC 4594 or M104. As is obvious from the linked image, it gets its name due to the similarities it shares with a sombrero, as we see the galaxy nearly edge-on. This beauty is located about 28 million light-years from Earth. Within its confines, it holds approximately 2,000 globular clusters, which is more than ten times as many as the Milky Way contains. Each of which, hold more than hundreds of thousands of stars.

While the Milky Way is about 100,000 light-years across, the Sombrero galaxy is only a portion of that distance. It takes light approximately 60,000 years to travel from one side of the galaxy all the way to the other.

The Pillars of Creation in M16:

The Pillars of Creation are located in the Eagle Nebula, which is about 7,000 light-years from Earth. Composed mainly of cold molecular hydrogen, they are active star-forming regions within our galaxy (or rather, they were... more on that below). This particular pillar is at least 4 light-years or 23,462,784,000,000 miles long.

As I mentioned above, the Pillars are still undergoing rapid star formation from our perspective. When in fact, the Pillars of Creation were likely destroyed some 2,000 years ago by a supernova shockwave; however, since the distance that separates us from them is so vast, the light from their destruction won't reach us for thousands of years yet. Quite literally, we are looking at them as they appeared about 7,000 years ago.

The Fairy of Eagle Nebula of M16:

This dust column is approximately 9 & 1/2 light-years tall. That is over TWICE the distance between the sun and Proxima Centauri, our closest stellar neighbor. This means that it takes just as long for light to travel from the sun to Proxima Centauri and back, as it does to travel from one side of this column to the other side!

Basically: "Space is big. You just won't believe how vastly, hugely, mind- bogglingly big it is. I mean, you may think it's a long way down the road to the chemist's, but that's just peanuts to space." - Douglas Adams