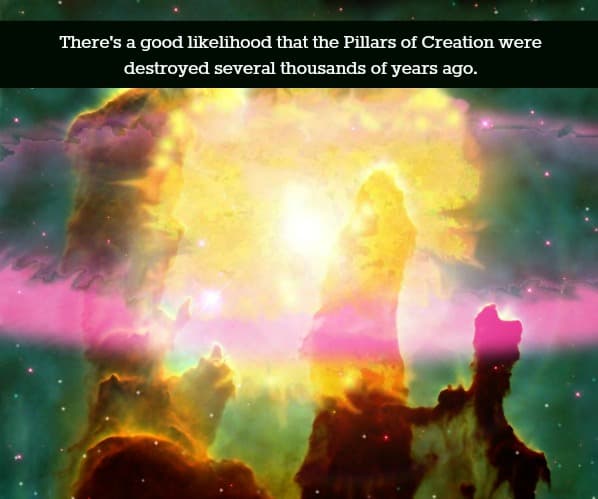 When the Hubble picture of the “Pillars of Creation” was released in 1995, no one expected to see anything like this. The entire world was astounded that nature could harbor such beauty, previously hidden from human eyes by an incredible distance. The Eagle Nebula (their location) is an estimated 7,000 light years away. Think about that for a second. Light travels at an incredible speed of 299,800 kilometers per second.

To reach the Eagle Nebula, you would have to travel at the speed of light for 7,000 years continuously.

So why were the pillars dubbed the “Pillars of Creation”? Because they are the birthplace of an unforetold number of new stars. The pillars, composed entirely of gas and dust, have such high densities that the resulting gravity causes the gas to contract and form stars. Now this may surprise some of you — after all, stars are enormous and it might seem impossible that the pillars could even hope to contain them. Think again.

Take a close look at the top of the left-most pillar (pictured at the right); You see the finger-like extensions at the top? That’s the size of our solar system. That should give you an idea of the scale of these gigantic structures. In fact, to describe the length of the pillars, we have to resort to light-years. The left-most pillar is an estimated four light-years in length. Let’s do some math.

37.8 trillion km That’s how big these things are.

But wait! The Pillars of Creation have left the best surprise for last. If there were some way you could fly up to the Hubble right now and attach a small eyepiece onto it, you would be able to see the pillars. Pretty basic right? Right.

So let’s recap what we know so far:

The paradox can be explained if we take a look at the properties of light. How do we see objects? We’ve learned from school that the light hits the object. The object then absorbs every wavelength except for one. This reflected wavelength then hits our eye and we see the object. What’s often left out of this process is a crucial element: time. It takes time for the light to travel those distances. So in fact, everything that you are currently seeing is what it used to look like in the past! In our everyday life, this doesn’t really affect us because the distances between your eye and other objects are relatively small.

In the world (or should I say universe?) of astronomy, however, everything must be taken into account. It takes light about 8 minutes to travel from the sun to the earth. So if you happen to look at the sun, you’ll see how it used to be 8 minutes ago. The picture that the Hubble took is what the pillars used to look like — 7,000 years ago. The distance is so incredible (“66 quadrillion, 181 trillion, 449 billion, 600 million kilometers”) that the amount of time does make a difference. So when we look up at the night sky, we’re looking into the past; a primitive way of time travel.

So take a look at the picture above one more time. The Hubble Space Telescope took this photograph by analyzing the received light and converting it into a digital image. The light that it received was, in fact, the light that reflected off the pillars 7,000 years ago. That light has just arrived at earth. This concept works the other way too — imagine that alien life exists within the pillars. If they took a look at the Earth, then they would see our Neolithic ancestors in the process of inventing the wheel (5,000 BCE).

So how does this explain why the pillars don’t exist anymore?

Because of an exploding star (or supernova). Astronomers think that a supernova (and the resulting shockwave) knocked down the pillars around 6,000 years ago. Since the pillars are 7,000 light-years away but were destroyed only 6,000 years ago, humans will continue to see the standing pillars for another 1,000 years.

Fast-forward 1,000 years. Imagine our descendants looking up at the pillars and watching the “scene”. They will see the dramatic shockwave slowly approaching the pillars. They will see the monumental pillars topple to the ground, annihilated by the force of a dead star. However, they will also realize that the “scene” actually took place a very, very, very long time ago.

This is the beauty of astronomy. It completely redefines the way we look at the world around us. It humbles us by showing us how insignificant we truly are in the grand scheme of things. And yet, it makes us feel privileged – privileged because we have been given the opportunity to observe this incredible universe. We are merely spectators, relegated to the lowly role of simply watching and trying to make sense of the cosmos. But when the cosmos contains such beautiful sights — very much like the Pillars of Creation — well then, who can complain?

More information can be found here.