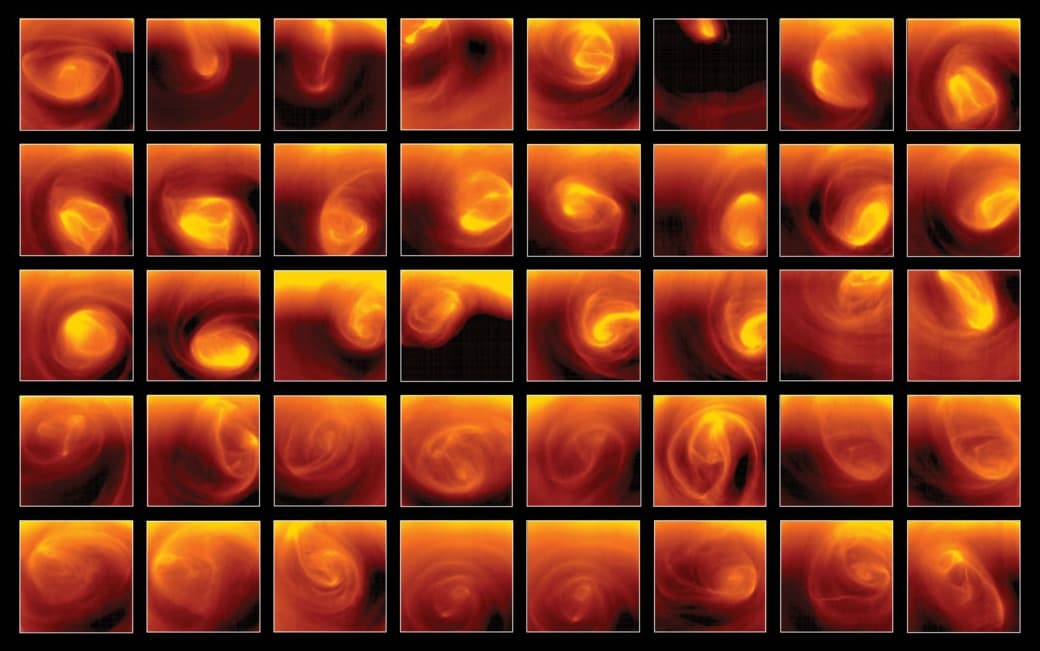 On 9 November 2005, 10 years ago yesterday, ESA’s Venus Express spacecraft left Earth and began its 153-day journey to Venus: Earth's evil twin. The craft then spent eight years studying the planet in detail before the mission came to an end in December 2014.

One of the mission aims was to observe the planet’s atmosphere continuously over long periods in a bid to understand its dynamic behavior.

The atmosphere is the densest of all the terrestrial planets, and is composed almost entirely of carbon dioxide. The planet is also wrapped in a thick layer of cloud made mostly of sulphuric acid. This combination of greenhouse gas and perennial cloud layer led to an enormous greenhouse warming, leaving Venus’ surface extremely hot—just over 450ºC—and hidden from our eyes.

Although winds on the planet’s surface move very slowly, at a few kilometers per hour, the atmospheric density at this altitude is so great that they exert greater force than much faster winds would on Earth.

Winds at the 40-mile (65 km)-high cloud-tops, however, are a different story altogether. The higher-altitude winds whizz around at up to 249 miles (400 km)/h, some 60 times faster than the rotation of the planet itself. This causes some especially dynamic and fast-moving effects in the planet’s upper atmosphere, one of the most prominent being its ‘polar vortices’.

The polar vortices arise because there is more sunlight at lower latitudes. As gas at low latitudes heats it rises, and moves towards the poles, where cooler air sinks. The air converging on the pole accelerates sideways and spirals downwards, like water swirling around a plug hole.

In the center of the polar vortex, sinking air pushes the clouds lower down by several kilometers, to altitudes where the atmospheric temperature is higher. The central ‘eye of the vortex’ can therefore be clearly seen by mapping thermal-infrared light, which shows the cloud-top temperature: the clouds at the core of the vortex are at a higher temperature, indicated by yellow tones, than the surrounding region, and therefore stand out clearly in these images.

Venus Express has shown that the polar vortices of Venus are among the most variable in the Solar System. This series of images of Venus’ south pole was taken with the VIRTIS instrument from February 2007 (left) to April 2008 (right).

The shape of this vortex core, which typically measures between 1,243 miles (2,000 km) and 1,864 miles (3,000 km) across, changes dramatically as it is buffeted by turbulent winds. It can resemble an ‘S’, a figure-of-eight, a spiral, an eye, and more, quickly morphing from one day to the next.

Read This Next
Futurism
Interview: Michel Bauwens on Peer-To-Peer Economics and Its Role in Reshaping Our World
Futurism
Astronomy Photo of the Day: 11/10/15 — CARMA-7
Futurism
No, Science Does Not Say That Religious Children Are More Likely to be 'Immoral"
Futurism
Scientists Take a Closer Look, Find No Evidence of Alien Megastructures
Futurism
Newfound Radio Galaxy is the Largest Known, And It's Dying
More on FromQuarkstoQuasars
What’s the (Anti)...
6. 12. 21 on the byte
Physicists Find Particles That Switch Between Matter and Antimatter
Futurism
11. 5. 15 on futurism
New Visualization Shows Incredible Variety of Extraterrestrial Worlds
Futurism
11. 2. 15 on futurism
New Star Trek TV Series Coming in 2017!
READ MORE STORIES ABOUT / FromQuarkstoQuasars
Keep up.
Subscribe to our daily newsletter to keep in touch with the subjects shaping our future.
+Social+Newsletter
TopicsAbout UsContact Us
Copyright ©, Camden Media Inc All Rights Reserved. See our User Agreement, Privacy Policy and Data Use Policy. The material on this site may not be reproduced, distributed, transmitted, cached or otherwise used, except with prior written permission of Futurism. Articles may contain affiliate links which enable us to share in the revenue of any purchases made.
Fonts by Typekit and Monotype.