Which Milky Way Star Will Explode Next, and How Will it Impact Earth? 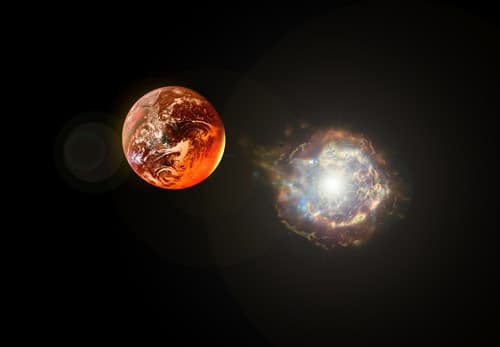 You've probably heard that supernovae only happen in our galaxy every hundred years or so. This is a little unfortunate, as they are among the most energetic events in the known universe, meaning that they put on a fantastic show.

So just how long will we have to wait for the next show? Which star is the most likely candidate to go nova soon? And what will it look like from Earth?

In truth, it's a little difficult to say which star will be the first to go; however, we have a few candidates to consider. The first candidate is one of the brightest stars in the sky. Eta Carinae, as it's called, is a heavyweight star located some 7,500 light-years from Earth.

Moving onward, we have IK Pegasus, one of two stars in an ill-fated binary system. One of the stars, IK Pegasus A, will soon transform into a red-giant (this transformation marks the beginning of the end for sun-like stars), subsequently transferring matter to its companion white-dwarf, IK Pegasus B. This process will eventually culminate in a type 1a supernova blast.

Of course, we can't ignore Antares, a super-giant in the constellation of Scorpio. It too has a companion star that will explode in a type 1a blast.

However, none of the aforementioned really hold a candle to Betelgeuse. Ultimately, it seems that this star is the most likely candidate for a rapid, fiery blast (perhaps if we say it three times, we'll get to see it in our lifetimes?)

Betelgeuse, which is located approximately 640 light-years from Earth in the constellation Orion -- is one of the biggest and brightest stars in our galactic neighborhood. It could swallow the Sun 20 times over. Ultimately, this beast emits 100,000 times more light than our own star.

If that doesn't convey its sheer enormity, let me put it this way: If you were to replace Betelgeuse with our Sun, it would extend all the way to Jupiter, engulfing Earth and all of the planets in the inner solar system.

Despite its amazing power, the star is nearing the end of its life.

It's estimated that Betelgeuse could go supernova anytime in the next million years. That means that, in all likeliness, we don't get to see it. But even if it exploded tomorrow, don't expect the explosion to be noticeable anytime soon.

It would take 640 years or traveling through the interstellar medium before the light made its way all the way to Earth. Interestingly, this means that Betelgeuse (also known as Alpha Orionis) could have already exploded hundreds of years ago, and we would have no way of knowing.

When that light does arrive, the intensity of the supernova, as seen here on Earth, is somewhat a debate. Some suggest that it would be able to be seen during the daytime and outshine the moon at night.

This is because a type II supernova blasts from a star this massive would have a peak luminosity over one billion times the energy produced by the Sun. Given that, and the distance that separates the two entities, the supernova will, at the very least, be visible to us for a small stretch of time, but the rest remains to be seen. Of course, given the vast distance, life on Earth is unlikely to be altered in any meaningful way (except that we'll likely have an absurdly bright star in our night sky).

Hopefully we'll get a chance to witness this spectacular celestial event before we pass on to dust.