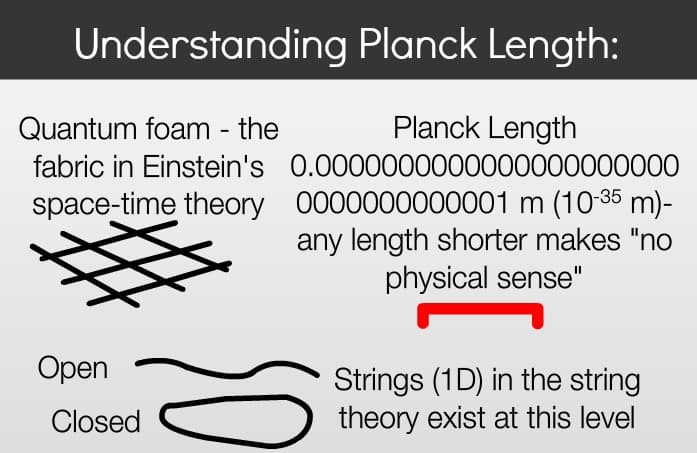 Quite often at FQTQ, we like to talk about immense cosmic structures, such as nebulae and galaxies. And as I’m sure you know, there is a realm of physics that deals with the unimaginably small, like the atomic and subatomic; however, beyond the atomic and subatomic, another realm exists that is far below even those levels of existence. At this level, there is a number that goes so far beyond the conventional understanding of ‘small’ that it's truly hard to fathom. This number is actually a length – the Planck Length. It is 20 powers of 10 smaller than the diameter of a hydrogen nucleus, and it is suspected to be the level at which the ‘foam’ of space-time is built. If you want to have a visual aid in understanding just how small this is, take a look at The Scale of the Universe.

The number in question is 1.616 × 10ˉ³⁵ m, and it belongs to a series of numbers known as the Planck base units. It can be calculated using an equation involving 3 fundamental constants: Planck’s constant, 6.6261 × 10ˉ³⁴ kg/s; the speed of light in a vacuum, 2.9979 × 10⁸ m/s; and the gravitational constant, 6.6738 × 10ˉ¹¹ (kgˉ¹·sˉ¹). Max Planck first came up with this remarkable number after studying black body radiation and quantum mechanics, and he also came up with base values for time, mass, epoch, scale, and temperature.You may have heard that this is the smallest possible length...

BUT HOW CAN THIS BE?

When you hear this, you may stop and think, "Surely, if I have a length, then I half it, and I repeat this over and over, I will be able to get to something smaller." However, this is an occasion where physics doesn’t allow something that mathematics does. For example, think about moving faster than the speed of light. On paper you could apply a force to a mass and accelerate it up and past the speed of light, but we know that in nature that just is not physically possible because the mass of the object (and thus, the energy needed to speed it up) goes towards infinity—both keep growing without any limit. So what we can do on paper, we can't do in reality.

So, how does a tiny number such as this tie into physics? If two particles were separated by the Planck length, or anything less, then it is impossible to actually tell their positions apart. Moreover, any effects of quantum gravity at this scale (if there are any) are entirely unknown as space itself is not properly defined. In a sense, you could say that, even if we were to develop methods of measurements that took us down to these scales, we would never be able to measure anything smaller despite any sort of improvements to our equipment or methods.

And as you probably know, the Universe was born in the Big Bang and expansion began from that infinitely dense point. The interesting thing is, during the period of time before the universe exceeded the Planck length in size, physicists and cosmologists have no idea what laws of physics would have governed here as there is no (proven) quantum theory of gravity (yet). However, the Planck number has proved useful in a number of different equations that have helped us to calculate and probe some of the deepest mysteries of the Universe.

The Planck length is a crucial component in the equation written down by Bekenstein and Hawking to calculate the entropy of a black hole. String theorists also think that it is the size of the vibrating ‘strings’ that make up all the elementary particles in the standard model. Regardless of whether or not string theory is true, one thing that is certain: In the search for a unifying theory of everything, understanding the Planck length and the physics involved will be key.