Researchers Suggest Our Galaxy's Central Black Hole Might Be a Wormhole 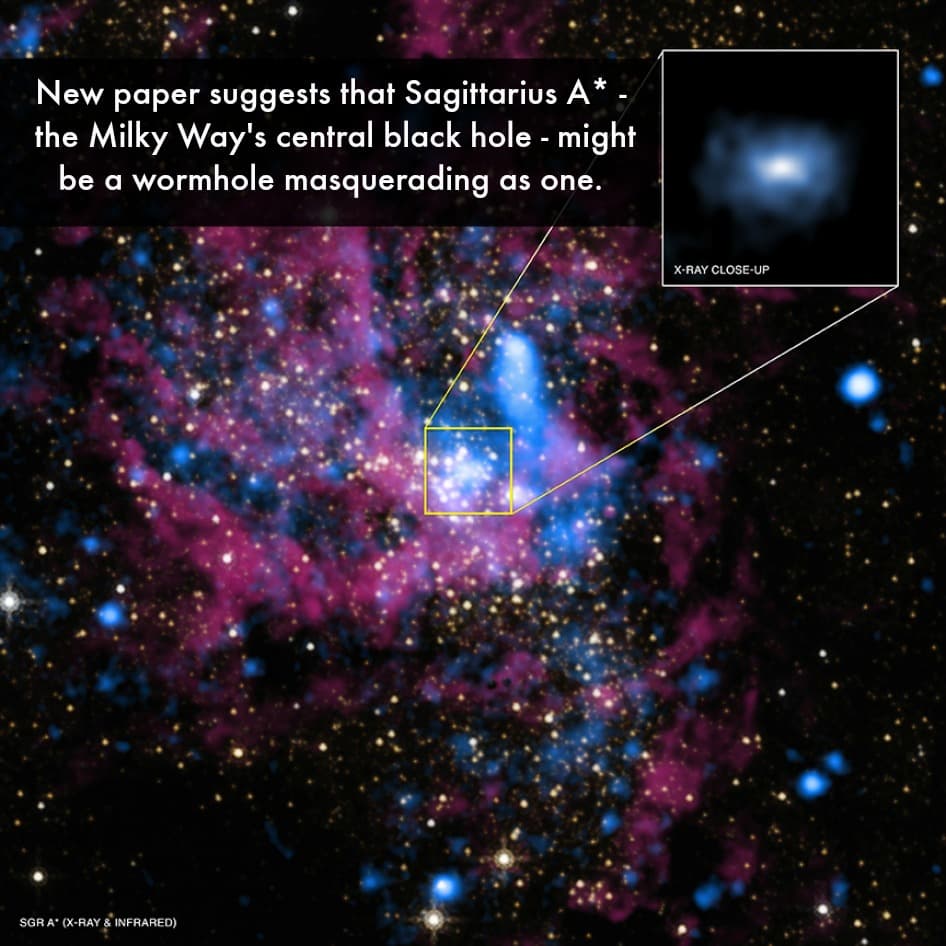 Of all of the mind blowing cosmic phenomena, black holes and wormholes seem to demand the most attention. Perhaps this is the case because both are so far flung from the natural world we are well-acquainted with.  As such, astronomers are huge fans of them too. Various papers have shed light on just how perplexing these mysterious objects are. First, some context:

In the center of the Milky Way, there is an extremely compact source that is spewing out large quantities of radio waves. Scientists posit that the strange phenomenon is the result of a supermassive black hole, looming in the central region of our galaxy. Through years of painstaking observations - with flares coming and going - astronomers concluded that the object, called Sagittarius A*, is a black hole containing the mass of more than 4 million sun. In fact, it would seem as if most, if not all, galaxies have black holes in the same position. Yet, we still understand very little about how they evolve and grow.. particularly how thy grow at such a disproportionately fast rate.

Take Sagittarius A* for instance (pictured above). It contains a combined mass of more than 4 million suns., yet it's small peas in comparison to gargantuan ultramassive black holes, which tend to be billions of times more massive than the sun (some are so large that it's impossible to even determine whether there is an upper-limit to how large black holes can become) It's thereby natural to presume that these changes must take time to implement ("Rome wasn't built in a day," after all), but contrarily, the black holes seem to be growing in the cosmic equivalent of a day. In order to rectify the size of some supermassive black holes with galaxy evolution models, astronomers figure that there must be an unknown variable driving their growth.

Now, two researchers - Zilong Li and Cosimo Bambi (both of Fudan University in Shanghai) - have submitted a paper for publication that suggests Sagittarius A* might not be a black hole at all, but a wormhole; an assertion that would render the above question obsolete.

Wormholes themselves come in many different flavors; some deal with time travel and inter-universe traversing, but the kind most people are familiar with would theoretically allow you to take a shortcut between two distant points in space. The Li and Bambi are working with a type of primordial wormhole that resembles the traditional black hole in structure.

According to the men:

“While of exotic nature, at least some kinds of primordial WHs (wormholes) can be viable candidates to explain the supermassive objects at the center of galaxies. These objects have no solid surface, and therefore they may mimic the presence of an event horizon. They would have been produced in the early Universe and grown during inflation, so they could explain their presence even at very high redshift.”

"Very high redshift" refers to the galaxies that exhibit high redshift through the doppler effect. Said galaxies are extremely old and very distant, with them having formed during one of the first epochs after the big bang. The expansion of the universe has driven them incredibly far from our line of sight, thus their frequencies shift to the reddest portion of the electromagnetic spectrum (we used this same tool, only on the opposite end of the electromagnetic spectrum, to determine that the Andromeda galaxy is closing in on the Milky Way, with a gravitational encounter coming in the next four or five billion years). Their light has traversed billions of light-years of spacetime before it finally reached Earth, but because the speed light travels at is finite, we see these old galaxies as they were in their prime, thus we know that the first galaxies that formed after the big bang also hosted huge black holes in their central region.

This is where the wormhole alternative comes in. The type of wormhole that exhibits properties of black holes can only be created in one event; the big bang itself; each having been born at the same time.

In fact, the type of wormhole that can mimic a black hole property-wise could only have been formed during the Big Bang, with each having more mass than a million suns, which possibly explains why the earliest galaxies appear to have supermassive black holes in their cores. They actually don't at all They just host rather large wormholes with properties that are similar to black holes,

The men believe the truth lies with the object's stellar "fingerprint" which we will have an opportunity to probe once a new instrument soon to be integrated into one of the world's most powerful telescope goes online. The men have devised a clever method of testing their hypothesis; by looking for a unique emission signature any such wormhole, especially Sag A*, might have.

To be more specific, black holes and wormholes both emit spectrally distinct "blobs" of plasma that should easily be differentiated between by GRAVITY: the aforementioned tool that will soon be installed on the ESO's "Very Large Telescope."  Not only will the signatures differ, but the beam of emission from the two objects should vary in size as well. With our hypothetical wormhole, simulations show that the outflow should have a “very narrow emission line,”while the black hole should emit a spectra that is “broad and skewed as a result of special and general relativistic effects,” according to  Li and Bambi.

Needless to say, GRAVITY has a lot to live up to; like finding the first verified wormhole, for starters.

The new paper builds on one published in 2011, which postulates that gamma-ray bursts witnessed on the outermost boundary between the known universe and the unobservable universe might not be linked to supernovae at all. In fact, these high-energy events might not even be linked to anything in our universe, but from a parallel universe.

Per the 2011 paper; the author -  Indiana University physicist Nikodem Poplawski - suggests that the material needed to spark the birth of a black hole does not just collapse into singularities as thought. Rather, the material is used as key building blocks of other universes. When material passes through it, it isn't destroyed, but it passes from the parallel universe to our own.  As crazy as it may sound, Poplawski's hypothesis has a solid basis is mathematics. He utilized Euclidean-based geometric modeling, which, in context, alludes to the existence of intra-universe wormholes, or black holes/wormhole hybrids, both born at the same time (See a more in depth explanation here).

Wormholes are truly captivating theoretical structures. Learn how they might drive quantum entanglement here, or learn whether or not Star-trek style wormholes could exist here.