Stephen Hawking : Black Holes, As We Know Them, Do Not Exist 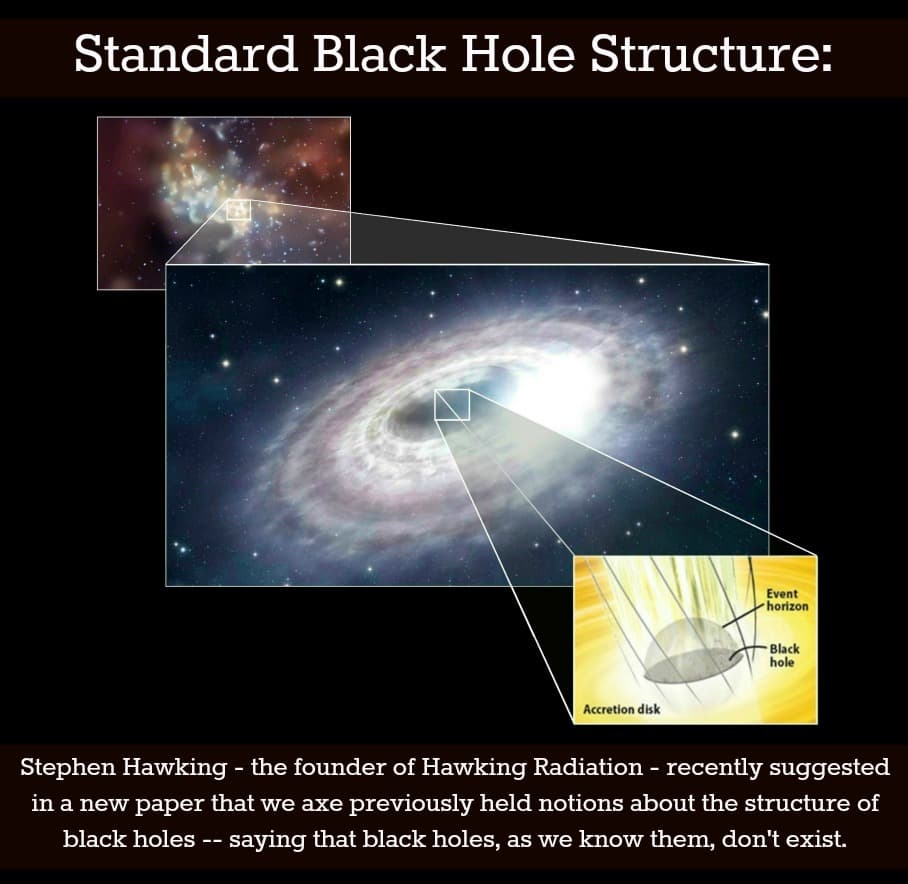 Stephen Hawking, the British physicist who is well known for the discovery of Hawking Radiation, recently published a new paper that turned our conventional perception of black holes on its head. Prepare to have your mind chewed up, spit out, and regurgitated.

Our every-day, run of the mill black hole model posits that black holes are somewhat layered. First, we have the event horizon. This area is defined as "the point of no return." It is the region in which the black hole's gravity becomes so strong that nothing, not even light itself, can escape from it (no matter the method used to attempt escape). Next, we have the singularity itself, which can be likened to a black hole's core. Here, all matter is pulled apart by immense tidal forces. In the singularity, the curvature of space-time becomes infinite, yet it somehow has 0 volume.

Imagine a point in space that sucks in matter and keeps it locked in an eternal prison--with no hope of escape. Ever. That's essentially how we understand black holes. Pretty terrifying beasts, really.

However, if you remove the event horizon from the model depicting a black hole's structure, things become a lot less scary.  Without the event horizon, things can escape. The prison, in essence, is not eternal. This is essentially what Hawking has proposed. According to his new paper, we should exchange the notion of an absolute event horizon to an "apparent horizon." This is a horizon where, instead of an object being obliterated once it crosses the event horizon into the singularity, the matter is held there for an unknown period of time, before it is reinterred into the universe (albeit, it leaves a little worse for the wear)

The idea itself is undoubtedly radical, but surprisingly sane, given the fact that it solves a paradox associated with black holes; called the firewall paradox. Hawking previously showed that black holes would leak particles and radiation and eventually explode; however, even for a black hole that is only the mass of a star, it would take longer than the age of the universe. The problem with this is that the information leaked from the black hole would be lost. And modern physics dictates that information cannot be lost from the universe (it deals with issues of quantum entanglement, which you can read about here).

Moreover,  having information flowing out of a black hole is incompatible with having an otherwise smooth Einsteinian space-time at its boundary i.e., the event horizon. In place of the event horizon (or rather, where the event horizon is) there would be a discontinuity in the vacuum that would manifest itself as energetic particles — a “firewall” — lurking just inside the black hole. According to this theory, an individual who is falling into a black hole would not travel along until they were ripped apart by gravity (as Einstein predicted). Instead, they would come to the boundary and suddenly (inexplicably) be burned to a crisp. This is not good for the person in question on a number of levels. First off, our unlucky traveler would be fried. But even worse, this poor fellow would experience a different form of physics than what governs the rest of the universe. In short, although the firewall obeys quantum rules, it does not conform to Einstein’s general theory of relativity. According to that theory, someone in free fall should perceive the laws of physics as being identical everywhere in the Universe — whether they are falling into a black hole or floating in empty intergalactic space.

Ultimately, if the firewall argument proved to be correct, one of three tenants of modern physics had to be wrong. Either information can be lost from the universe after all; Einstein’s principle of equivalence is wrong; or quantum field theory is wrong and needs to be restructured. In other words, it was a confusing, horrible problem.

A few days ago, Hawking proposed another option. In his new proposal, quantum mechanics and general relativity remain intact, and instead, black holes do not have an event horizon to catch fire. Hawking justifies this claim by asserting that quantum effects around the black hole cause space-time to fluctuate too wildly for a sharp boundary surface to exist.

According to this view, we are left with an “apparent horizon.” This horizon is a surface along which light rays that are attempting to rush away from the black hole’s core will be suspended. If Hawking is correct, then it is possible that there may be no singularity at the core of the black hole. Instead, matter would be only temporarily held behind the apparent horizon. Moreover, this matter would gradually move inward owing to the pull of the black hole; however, it would never quite crunch down to the center. Notably, information about this matter would not destroyed, but would be highly scrambled so that, as it is released through Hawking radiation, it would be in a vastly different form.

Hawking’s new suggestion is that the apparent horizon is the real boundary--a place that grows or shrinks according to how much matter is consumed or radiation is given off. Ultimately, as Hawking writes, “The absence of event horizons means that there are no black holes — in the sense of regimes from which light can't escape to infinity."