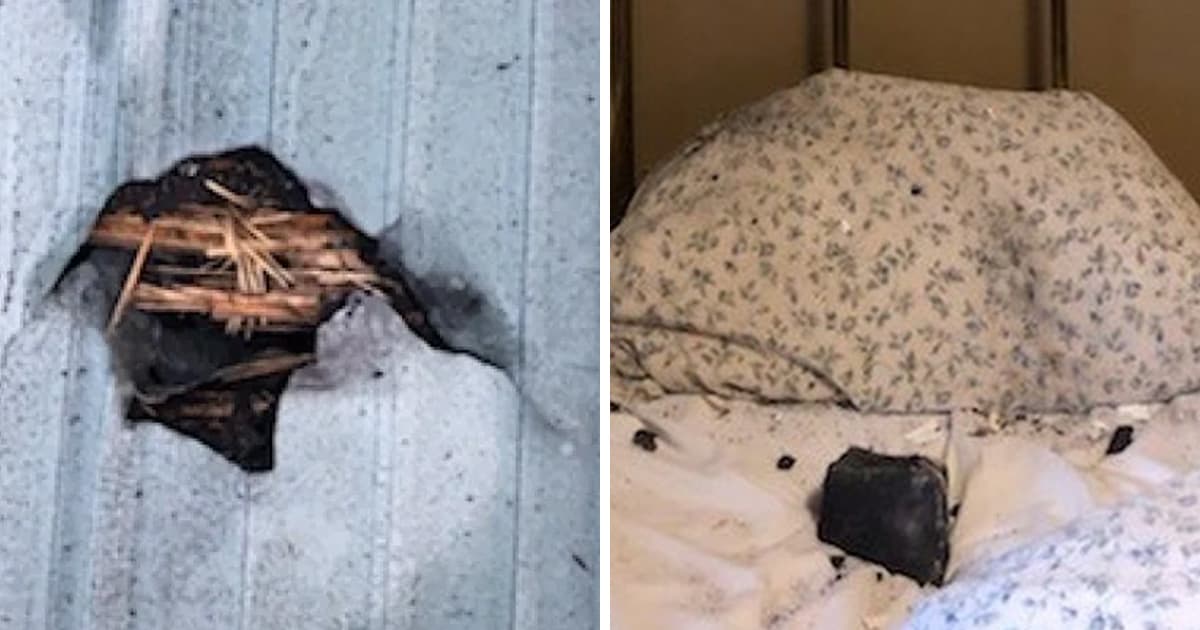 "You're sound asleep, safe, you think, in your bed, and you can get taken out by a meteorite, apparently."

"You're sound asleep, safe, you think, in your bed, and you can get taken out by a meteorite, apparently."

Golden, British Columbia native Ruth Hamilton was woken up by her dog barking — and seconds later, she says, a roughly two-pound rock smashed through her roof, landing inches from where she was sleeping.

And as it turns out, it wasn't some dangerous prank. The rock was a chunk of actual meteorite, Canadian broadcaster Global News reports, which had lit up the night sky earlier that night.

The finding was later confirmed by a team of experts from Western University in Ontario, Canada.

"Everything about the story was consistent with a meteorite fall, and the fact that this bright fireball had occurred basically right at the same time made it a pretty overwhelming case," Western astronomy professor Peter Brown told the CBC.

"I’ve never been so scared in my life," Hamilton told the broadcaster. "I wasn’t sure what to do so I called 911 and, when I was speaking with the operator, I flipped over my pillow and saw that a rock had slipped between two pillows."

The first known person to actually get hit directly by a meteorite was Ann Hodgens, a woman from Alabama. In 1954, a 8.5-pound meteorite crashed through her roof and struck her on the side of her hip, according to Insider, which she survived with heavy bruising.

Hamilton is planning to keep the rock after Brown and his team have a thorough look — a keepsake of a very strange and unique night.

"I was shaking like a leaf," Hamilton told the CBC. "You're sound asleep, safe, you think, in your bed, and you can get taken out by a meteorite, apparently."

More on meteor showers: NASA Puzzled by Five Fireballs Over America in One Night

Finding Meteorites In Antarctica is Grueling but Worth It
3. 29. 18
Read More
Going Down
Scientists Say the Sun Is Acting Up and Causing Satellites to Fall Back to Earth
6:13 PM
Read More
Watch Out Now
Pilot Spots Jetpack While Landing at LAX
5:52 PM
Read More
+Social+Newsletter
TopicsAbout UsContact Us
Copyright ©, Camden Media Inc All Rights Reserved. See our User Agreement, Privacy Policy and Data Use Policy. The material on this site may not be reproduced, distributed, transmitted, cached or otherwise used, except with prior written permission of Futurism. Fonts by Typekit and Monotype.