These cosmic monsters tear their companions to shreds. 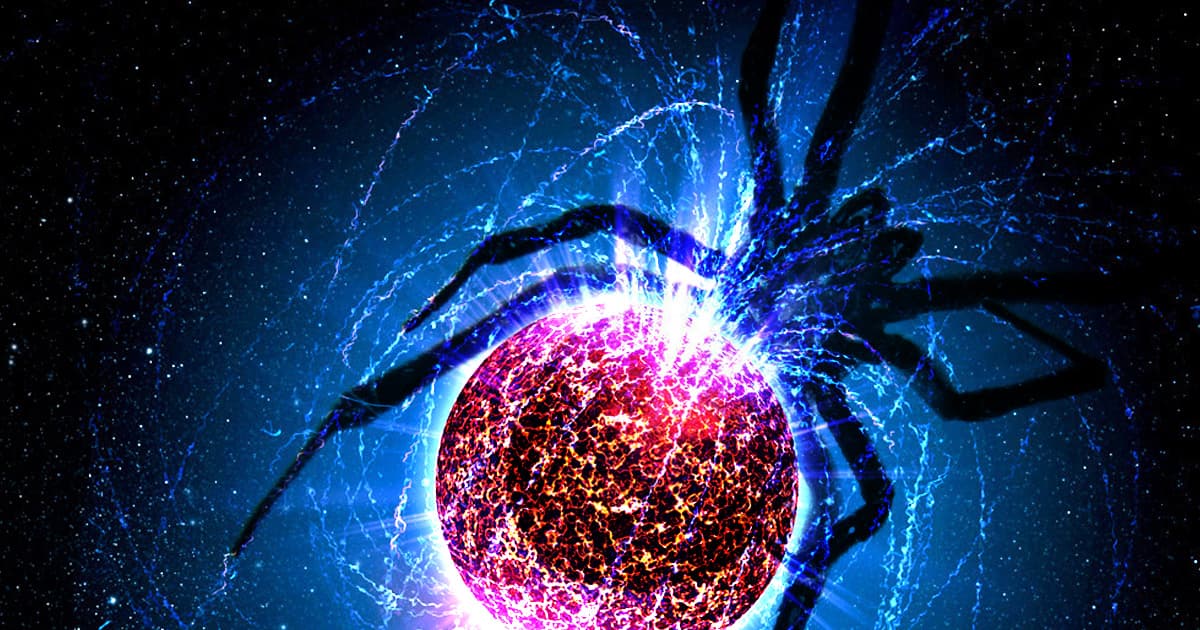 An international team of astronomers have spotted a new type of "spider star" — highly energetic pulsars that tear up their companion stars in binary systems.

These highly energetic celestial objects have long fascinated astronomers because they flicker in the night sky in regular rhythms. But before we go on, let's take a couple of steps back.

When a supergiant star collapses in on itself following a supernova, it leaves behind extremely dense remains in the form of a neutron star or white dwarf.  With enough electromagnetic radiation, such a star can start spinning at a dizzying clip, turning itself into a pulsar — almost like a cosmic lighthouse.

Astronomers are able to spot these odd stars by observing their regular cosmic ray outbursts released during each rotation, with periods ranging from several milliseconds to whole seconds. They're so predictable, in fact, that scientists suggest using the location of various pulsars to create a kind of "celestial GPS."

Pulsars completing a rotation every 30 milliseconds or less are often referred to as "spider stars" since they are usually found in binary systems where a closely orbiting companion star is actively being broken down by the pulsar accreting matter from its companion.

Spider stars tend to circle their binary star companions at such close distances, they end up tearing their companion to shreds, as Live Science points out.

That's how a subclass of these violent stars ended up with the nickname of "Black Widow Stars," named after the spider genus in which the female eats the male after mating.

"Redback" stars, on the other hand, have a higher mass companion star, which causes signals to be eclipsed every time the companion star passes between it and the Earth.

In a new yet-to-be-peer-reviewed paper uploaded to the preprints server arXiv, an international team of astronomers outline their discovery of eight binary millisecond pulsars (MSPs) using the Arecibo Observatory in Puerto Rico, the same one that collapsed unexpectedly in December.

Among these eight stars, three of them are newly identified black widows and one is a redback — as well as a pulsar that defies classification, as the researchers write in their paper. This odd-one-out star has a companion star that would be too massive to be classified as a black widow, but not massive enough for a typical redback.

"This system may represent a rare middle-ground case between these two observational classes," the astronomers wrote in their paper.

Read This Next
Dark Matter Mystery
Distant Neutron Stars May Offer Clue About the Truth of Dark Matter
RIP
Iconic Arecibo Alien-Hunting Observatory Will Be Demolished
Positron Electron
Neutron Star's "Halo" Could Help Solve Antimatter Mystery
Smol Black Holes
Scientists Discover New Class of Tiny Black Holes
Futurism
Earth Is Getting Hit by Too Much Antimatter, and Nobody Knows Why
More on Hard Science
Past Particle
Tuesday on the byte
Large Hadron Collider Discovers Strange New Particles
Moved to Tears
Jun 30 on the byte
Scientists Say New James Webb Images Are So Powerful That It Was Emotional Just Looking at Them
Good God
Jun 28 on the byte
Huge Cloud of Toxic Yellow Gas Kills 13
READ MORE STORIES ABOUT / Hard Science
Keep up.
Subscribe to our daily newsletter to keep in touch with the subjects shaping our future.
+Social+Newsletter
TopicsAbout UsContact Us
Copyright ©, Camden Media Inc All Rights Reserved. See our User Agreement, Privacy Policy and Data Use Policy. The material on this site may not be reproduced, distributed, transmitted, cached or otherwise used, except with prior written permission of Futurism. Fonts by Typekit and Monotype.