As recently as yesterday, NASA had been exploring options to repair the ailing dish. 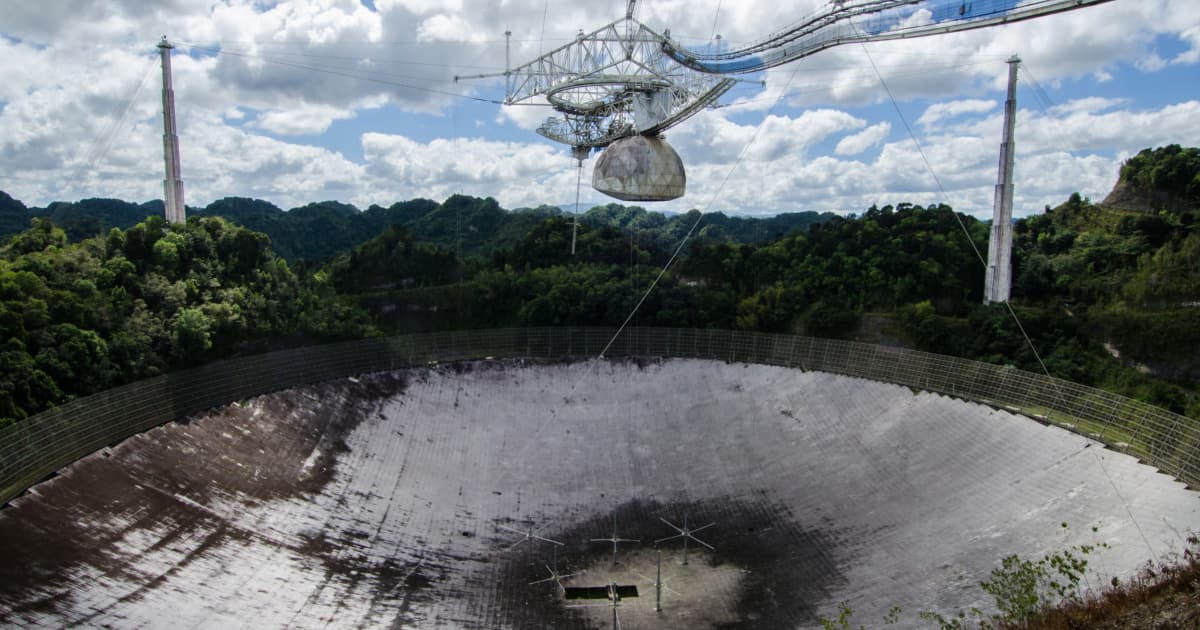 It's a sad day for astronomy.

The iconic Arecibo Observatory collapsed on Tuesday, according to officials. The 900-ton platform suspended above the 1,000-foot-wide dish antenna came crashing down, caused by failing cables that were already stretched to their limits.

As recently as yesterday, NASA had been exploring options to repair the ailing dish.

The instrument platform of the 305m telescope at Arecibo Observatory in Puerto Rico fell overnight. No injuries were reported. NSF is working with stakeholders to assess the situation. Our top priority is maintaining safety. NSF will release more details when they are confirmed. pic.twitter.com/Xjbb9hPUgD

Luckily, no injuries were reported, according to tweets by the National Science Foundation.

Less than two weeks ago, scientists announced plans to demolish the 57-year-old observatory.

The Arecibo Observatory has been collecting invaluable data, listening in on mysterious radio signals emanating from the far corners of the observable universe.

It has also been used to send out the "Arecibo Message" in the 1970s, a pattern of numbers and chemical formulae, in a symbolic effort to reach out to intelligent extraterrestrial lifeforms that may exist elsewhere in our universe.

Scientists are mourning the news, with some tearing up during interviews.

More on the observatory: Iconic Arecibo Alien-Hunting Observatory Will Be Demolished

Read This Next
zombie star
Scientists Puzzled by Star That Exploded in Supernova But Somehow Survived
Whack-an-Alien
Chinese Scientists Say They May Have Detected Signal From Extraterrestrial Intelligence, But Probably Not
That's One Theory
Weird Signal Appears to Have Come From Habitable Star System
Walled Up
Scientists Say Space Is Filled With Invisible Walls
Black Hole Snapshot
Scientists Release Image of Black Hole at Center of Our Galaxy
More on Hard Science
Past Particle
Tuesday on the byte
Large Hadron Collider Discovers Strange New Particles
Moved to Tears
Jun 30 on the byte
Scientists Say New James Webb Images Are So Powerful That It Was Emotional Just Looking at Them
Good God
Jun 28 on the byte
Huge Cloud of Toxic Yellow Gas Kills 13
READ MORE STORIES ABOUT / Hard Science
Keep up.
Subscribe to our daily newsletter to keep in touch with the subjects shaping our future.
+Social+Newsletter
TopicsAbout UsContact Us
Copyright ©, Camden Media Inc All Rights Reserved. See our User Agreement, Privacy Policy and Data Use Policy. The material on this site may not be reproduced, distributed, transmitted, cached or otherwise used, except with prior written permission of Futurism. Fonts by Typekit and Monotype.