BREAKING: The Arecibo SETI observatory will be demolished, in a sad day for the hunt for extraterrestrial life. 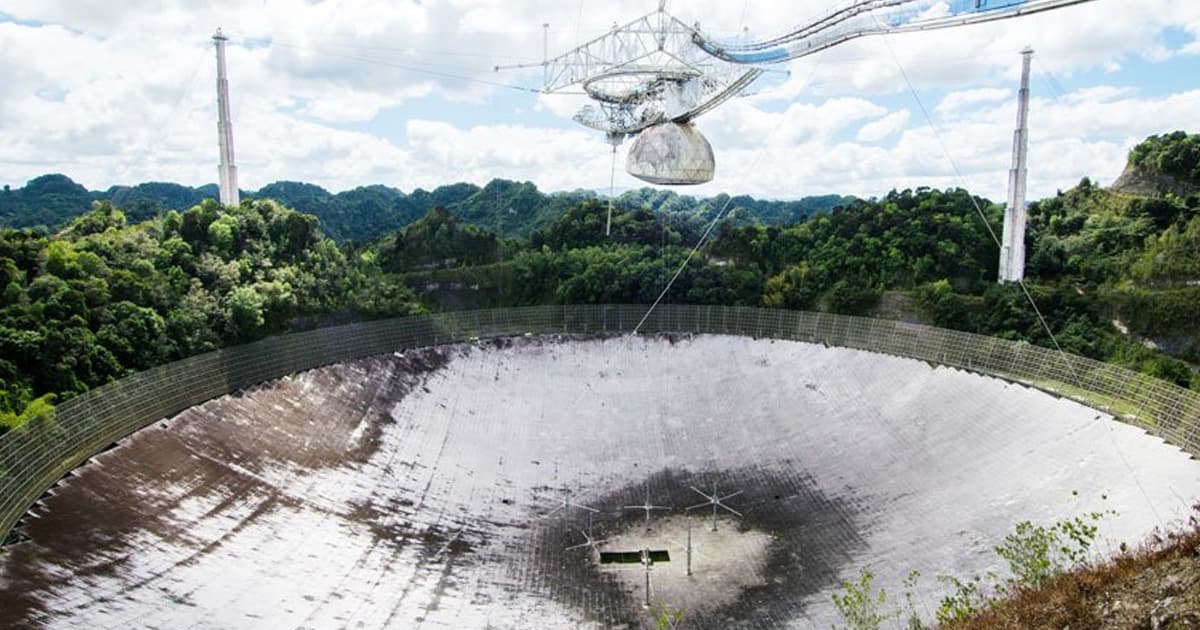 The National Science Foundation (NSF) has announced that the world-renowned Arecibo Observatory in Puerto Rico, a radiotelescope that has provided the scientific community with invaluable data for over half a century, is officially being decommissioned and demolished, The Verge reports.

The aging 57-year-old structure has recently seen some major setbacks which sealed its fate. In August 2020, an auxiliary cable holding a massive 900 ton platform suspended above the 1,000 foot-wide dish snapped, causing millions of dollars of damage to the dish. Then in November, a main cable attached to the same mast failed as well, causing further damage.

It's a sad day. The observatory has not only been used to observe radio wave signals in deep space. It's also become an iconic landmark over the decades after being featured in countless films and TV shows including the 1995 James Bond blockbuster "GoldenEye."

The observatory has also made significant contributions to the Search for Extraterrestrial Intelligence (SETI), spotting mysterious radio signals emanating from distant corners of the universe.

"This decision is not an easy one for NSF to make, but safety of people is our number one priority," Sean Jones, the assistant director for the mathematical and physical sciences directorate at NSF, told reporters today over a conference call, as quoted by The Verge.

The decision was a long time coming.

"All of the main cables, all of which are decades old and have been through storms, earthquakes, and constant heavy moisture, may no longer be capable of supporting the load that they were designed [to carry]," the observatory's program director Ashley Zauderer added.

Zauderer also noted that just one more cable failure could have led to a complete disaster.

In sum, it sounds like the teams in charge of the observatory were facing a lose-lose situation.

"Engineers cannot tell us the safety margin of the structure, but they have advised us that the structure will collapse in the near future on its own," Ralph Gaume, director of NSF’s division of astronomical sciences, told reporters.

READ MORE: Facing collapse, the famed Arecibo Observatory will be demolished [The Verge]

More on the observatory: Giant Arecibo SETI Telescope Could Collapse After Mysterious Damage

Read This Next
Spider Stars
Astronomers Discover "Spider Stars" That Tear Apart Other Stars
Loeb Strikes Again
Harvard Astronomer Says We Should Hunt for Alien Probes
Phone Home
SETI Institute Admits That Proxima Centauri Signal Is Very Strange
Is There Anybody Out There
NASA Funds Harvard Hunt for Alien "Technological Civilizations"
ET Phone Home
NASA Funds Giant Radio Telescope Concept on Far Side of Moon
More on Hard Science
Horrible Geese
Yesterday on futurism
Furious Geese Are Defeating Humans, Scientists Find
Quacks Like a Duck
Dec 1 on futurism
Those Headlines About Scientists Building a Wormhole Are Total Nonsense, People
It From Bit
Nov 22 on the byte
A Scientist Is Crowdfunding an Experiment to Check if We Live in a Simulation
READ MORE STORIES ABOUT / Hard Science
Keep up.
Subscribe to our daily newsletter to keep in touch with the subjects shaping our future.
+Social+Newsletter
TopicsAbout UsContact Us
Copyright ©, Camden Media Inc All Rights Reserved. See our User Agreement, Privacy Policy and Data Use Policy. The material on this site may not be reproduced, distributed, transmitted, cached or otherwise used, except with prior written permission of Futurism. Articles may contain affiliate links which enable us to share in the revenue of any purchases made.
Fonts by Typekit and Monotype.