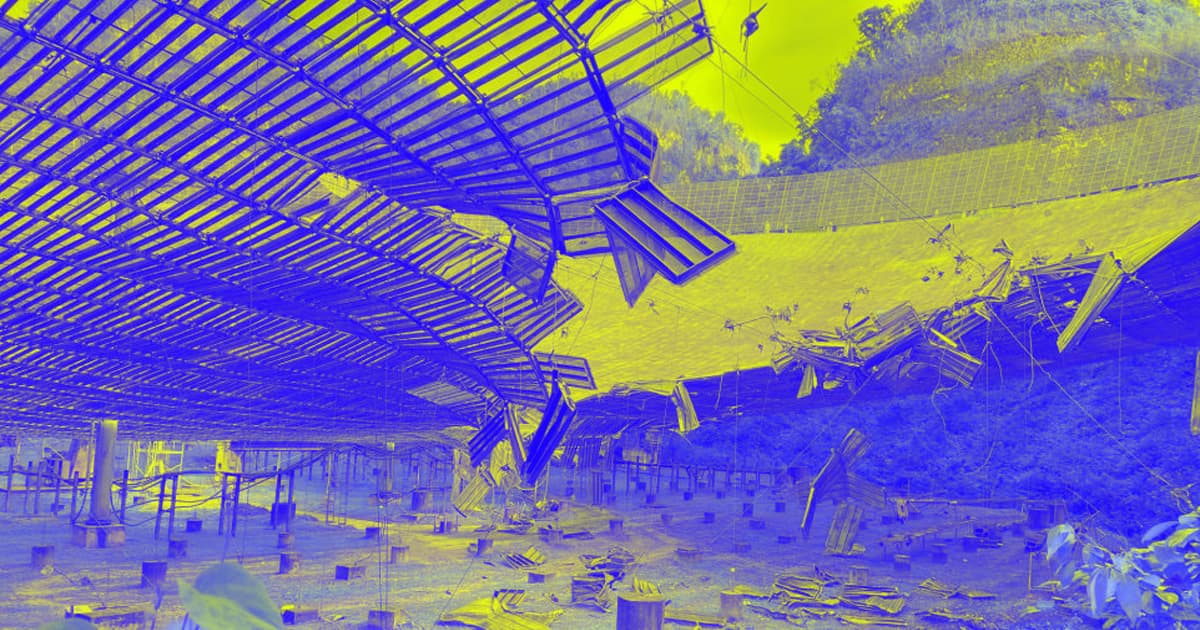 More bad news for the alien-hunting Arecibo Observatory in Puerto Rico. A second cable has fallen, crushing the intricate reflector dish below.

A first auxiliary cable failed over the massive dish on August 10, crushing a portion of the dish and representing a significant setback for the observatory.

The dish was mainly used to hunt for extraterrestrial life — but research had to be put on pause for several months following the event.

Compounding the problem, a main cable — which was connected to the same support tower as the auxiliary cable — failed this week, causing additional damage to both the dish and other nearby cables, according to a statement by the University of Central Florida, which co-manages the facility.

Luckily, nobody was hurt.

The cause of the break has yet to be identified. Officials suspect it may have been caused by the extra load the cables had to carry since the first cable failure.

"This is certainly not what we wanted to see, but the important thing is that no one got hurt," observatory director Francisco Cordova said in the statement. "We have been thoughtful in our evaluation and prioritized safety in planning for repairs that were supposed to begin Tuesday. Now this."

Engineers are hoping to support the structure with steel reinforcements to alleviate some of the additional load. Two replacement cables are already on their way to the observatory.

The aging Arecibo radio telescope dates back to the early 1960s and has been in operation for over half a century. The reflector dish alone is 1,000 feet in diameter and is composed of 38,778 perforated aluminum panels.

More on the observatory: SETI Telescope Down for Months After Mysterious Damage

Spider Stars
Astronomers Discover "Spider Stars" That Tear Apart Other Stars
1. 19. 21
Read More
Loeb Strikes Again
Harvard Astronomer Says We Should Hunt for Alien Probes
12. 22. 20
Read More
Phone Home
SETI Institute Admits That Proxima Centauri Signal Is Very Strange
12. 22. 20
Read More
+Social+Newsletter
TopicsAbout UsContact Us
Copyright ©, Camden Media Inc All Rights Reserved. See our User Agreement, Privacy Policy and Data Use Policy. The material on this site may not be reproduced, distributed, transmitted, cached or otherwise used, except with prior written permission of Futurism. Articles may contain affiliate links which enable us to share in the revenue of any purchases made.
Fonts by Typekit and Monotype.